How to Play Medium Pairs

Hand values in poker fall into three basic categories, two of which are quite simple to play well. There are the top premium hands, the absolute trash and then everything else in the middle. It is the last category of the middle, which encompasses medium pocket pairs, that is a little trickier to play well. We will define medium pocket pairs as sixes through nines. Some players consider tens to be a medium pair, others consider it to be a big pair – they’re right on the cusp.

Medium pairs are very dependent on your position in the betting order and the number of opponents in the hand. A  medium pair can survive the flop and look to be a potential winner, or it can be devastated by the flop. If you’ve got a number of opponents and a bunch of over cards – your medium pair goes from probably being the pre-flop leader to the post-flop loser.

Position is the most critical element determining how to best play these holdings. Let’s start off taking a look at holding medium pocket pairs by various positions.

Having defined medium pocket pairs as sixes through nines means I don’t consider them to have much difference, as over cards will dominate a pair of sixes just as well as a pair of nines. Folding medium pairs from early position is generally the best option, but I would let the texture of the game dictate this. If the game is passive, then you can consider entering the pot, just like you would with a small pocket pair.

How you proceed from middle position is contingent upon what action has occurred before you. If you are first in then I would raise virtually one hundred percent of the time hoping to either win the blinds or get heads-up with one other player. If several players have limped in, then I would limp as well which many times creates a “limp fest” and affords you the proper pot odds to attempt to hit your set. If it is raised in front of me, I need to consider the tendencies of the raiser. If I believe he is a solid player I will fold frequently or re-raise. Calling is the last option I would choose as that puts you into a guessing game on the flop.

The later you are in the betting order and the more opportunity you’ve had to see what your opponents have done with their hands, the more latitude you have with a medium pocket pair. If the action gets to you and it has been raised and re-raised then I would muck and wait for a better spot. Joining a raising war with a medium pocket pair can be very costly. Barring a re-raise, I would plan on playing these medium pairs all the time from late position and raising the vast majority of those times. Since from late position there will be a limited number of players behind you who could “wake up” with a hand, now if there are several limpers I would recommend coming over the top with a large raise. This is because the limpers represent hands which are marginal and are hoping to see a cheap flop. Make them pay!

As in all of poker, you need to be assessing the skills and tendencies of your opponents as some players may be slow playing Aces or Kings and looking to trap someone. Don’t despair if you do get caught in the occasional trap as those players are not playing well so you should be able to get your money back.

Medium pocket pairs have some commonality with small pocket pairs, which usually need help to prevail at a showdown. The odds of hitting a set when holding a pocket pair is 7.5-to-1 against, so you’ll obviously miss hitting a set more often than not.

It is important to be able to properly play the flop when you do not connect. If you had called a raise pre-flop, missed your set and now the raiser bets, you should normally muck your hand. Also, if you just called you should be hoping to see the turn for free as you do not want to put any additional money into the pot.

If you do hit your set on the flop, prepare to win or lose a large pot. The good news is more often than not you will be the one winning the pot. It is normally very hard to get away from a set but the betting action and texture of the board should guide you.

Here is an example of a situation that might make you grind your teeth but should be easy, though frustrating, to muck your set.

You enter the pot with

falls on the river. The turn was certainly not to your liking but the river is just horrible, putting a fourth heart on the board. Your opponent now shoves all-in:

As frustrating as it might be to have had top set, you now realize your hand must be mucked because, in the words of Norman Chad, it has just become Squadouche. Those are expensive hands to play but realizing that poker is a game of relative values and mucking your set, when appropriate, will save you money in the long run.

Like small pairs medium pairs, while better, still usually need to improve in order to prevail. Playing these poker hands out of position can be tricky but also very profitable when you’re fortunate enough to have them connect. Your strategy is probably to hit a set or fold – unless the board is very ragged and there’s a lot of checking before it gets to you. You can then bet and take the pot. In addition to position, remember to assess your opponents and the texture of the game to help you chart your strategy. 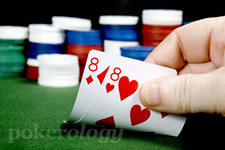 Medium pairs have some commonality with small pairs, which usually need help to prevail at a showdown.