How to Play Small Pairs

Pocket pairs, regardless of rank are coveted by many poker players. After all, statistically you only can expect to get them once in every seventeen deals. That being said, when misplayed, they can become real chip burners.

A number of positive outcomes need to occur to enable your small pocket pairs to prevail. These outcomes include:

That is a lot of good fortune all in one hand. The main problem is that all of these elements rarely fall into place. With the need for this kind of parlay of events, we should look at the necessary elements individually.

Coming in late with small pocket pairs is a time honoured tradition in hold’em. However, joining up in early position necessitates the need for the criteria mentioned above to fall into place. Misplaying these small pairs from early position can be a major leak in one’s game. Considering that small pairs will need assistance to win, discipline becomes a major component of playing them well. If you do not make your set on the flop, in all probability you will need to muck these hands. Playing along with a board full of overcards and hoping to hit your set on the turn or river is usually a good way to lose money. This approach is also a time honoured tradition… among weaker poker players!

Texture of the Game

If you find yourself in a weak/passive game where pre-flop raising is rare, you can move your entry position earlier since you can expect to receive adequate pot odds. These type games used to be easier to find. As the hold’em playing public collectively honed their skills, they have become more aggressive. That being said, there are still many weak and passive opponents out there so keep your eyes peeled. A weak/passive game is the perfect environment to enact a popular strategy called set mining which we will discuss next.

Set mining is a popular strategy due to the high implied odds no-limit hold’em offers. The strategy of entering the fray with a small pair with the express hope of hitting a set on the flop embraces the risk/reward ratio of… for one bet I might obtain a monster and win a huge pot. While this can indeed happen, one must approach it with caution and knowledge about the game environment, opponent stack sizes and opponent playing tendencies.

The environment should be passive so you can be comfortable that you will not be raised; opponent stack sizes should be large enough to make the risk worth the potential reward; and knowing your opponents’ playing tendencies should help guide you as to how to play your set if you’re fortunate enough to hit it.

Exercising discipline cannot be stressed enough. More money is lost in poker when a well calculated plan goes amiss and the player does not possess the discipline to abandon the plan and muck a losing hand. If you are hoping to turn a small pocket pair into a winning hand and do not hit your set, then face the reality and if bet into have the strength to fold your apparent loser and wait for the next deal.

Getting Paid When You Hit

Remember, you will not be the only poker player observing opponent behavior. Some of your foes will be watching you. When you do limp in with a small pair and the flop contains three rags, including a card to make your set, don’t chase away your customers by making a bet which is too large. Your more observant opponents will realize you just limped in and probably hit a small set and be able to get away from their hands.

Having hit a set and not even gaining one additional chip can be frustrating. Knowing your opponents’ playing styles is very important to maximize your earning power in this situation. Calling stations who have difficulty in folding are your best customers.

While playing small pocket pairs can be rewarding, remember that many positive elements need to fall into place and that parlay of events is not exactly a common occurrence. Unless you have a spot on read of your table being extremely passive which will give you solid pot odds to attempt to hit your set, then folding small pocket pairs in early position must be considered. When you are regularly able to muck those small pairs from early position, if the conditions so warrant, you will know your game has advanced in its sophistication. 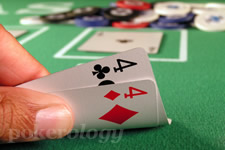 Set mining is a popular strategy due to the high implied odds no-limit hold’em offers.