Slow-playing disguises the true strength of your hand to bait a trap for your opponent. Perhaps you think that if you call quietly instead of raise aggressively, he’ll come out betting on a subsequent round and then you can trap him for additional bets. Or, in cases where you’re the first one to act, you can check with the intention of raising once he bets and the action gets back to you. You can also slow-play by calling, and when you do, you’re hoping your opponent will read you for a weak hand. If he does, you can raise on a subsequent betting round.

Your goal is to win as much money as you can from your opponents. When you have a very strong hand and are not wary of a card or two that might promote your opponent’s hand to a station higher than yours, slow-playing allows him to put more money in the pot before you reveal the real strength of your holding.

By allowing him to be the aggressor, you also engender a stronger commitment to the pot from him. And that’s important. If your opponent doesn’t have much invested in the pot, makes a small bet and you come over the top with a huge raise, he’s probably not going to call unless he has a pretty strong hand himself, or strongly suspects that you’re bluffing.

An Example of Slow-Playing

Here’s an example. You’re playing $1-$2 no-limit hold’em and call a $6 raise from the big blind with

, giving you the nuts, and what’s better, there’s not much you have to worry about.

You consider your options. You can come out betting, and by doing so you’re essentially telling your opponent that you have a good Ace or perhaps two pair, since you realize that he is aware of the fact that you figure he has at least an Ace – and quite possibly two pair or a set – because he raised before the flop.

If your opponent is a savvy, analytical player, you don’t want to scare him away, so you plan to slow-play instead of aggressing. Slow-playing is nothing more than deferring your option to act until later. When you do this, your opponent can’t really make many assumptions about the strength of your hand. If he does, the usual assumption is that you checked because you have a marginal hand or a draw and are hoping to look at another card on the cheap.

You hope this is what he’s thinking, because if he does, he’ll probably bet again on the turn. He’ll bet because he does not want you to complete your draw inexpensively. So you check and he bets. But this time he bets $33, the size of the pot:

If your opponent is an aggressive player, you can check again. He’ll bet once more, and it’s likely to be in the neighborhood of $100 this time. If he does, you have him where you want him. Since you both started with $200, you can raise all-in and he’ll probably call. If the effective stack size was $300, then he’d have to decide whether to call for all his chips or release his hand.

Either way, slow-playing did what aggressive play would not have done. It gave your opponent both motive and opportunity to paint himself right into a corner by aggressively wagering, and now he has to make either a tough call or a tough fold – and you’re the recipient of his “damned if he does, damned if he doesn’t” choice.

If Your Opponent is Not Aggressive

If you’re reading between the lines here, you’ve probably observed that slow-playing won’t work in every circumstance, or against all opponents. If your opponent is not aggressive, but the kind of player who usually won’t make big wagers without the best hand or pretty close to it, your play would not have worked. He would have become cautious when you checked and called. Unlike the aggressive player, who assumes your check and call is a sign of weakness or a drawing hand that hasn’t gotten there yet, a more cautious player – particularly the kind who is prone to seeing monsters under the bed at every opportunity – would probably have checked behind you on the turn. This is especially likely if your opponent tends to make big bets only with either very good hands or very bad ones, but will check to keep the pot smallish with medium strength holdings.

After all, with a very strong hand, your opponent will have no fear. And with a weak hand, he can fold with a clear conscience if you check-raise him. But if you re-raise when he has a medium strength hand, he has a tough decision to make. And because his conclusion will be wrong much of the time, smart players avoid putting themselves in these kinds of situations.

Is Your Hand Strong Enough to Slow-Play?

So the decision to slow-play is partially dependent on the characteristics and playing style of your opponent. It is also dependent on how well your cards figure to hold up during the remainder of the hand. If you know you have the best hand on the flop but the board is draw-heavy and you have more than one opponent, you’d be crazy to slow-play. After all, you don’t want to give your opponents an inexpensive opportunity to beat you. But if you’re not afraid of a draw, you’d want to give your opponents a chance to improve, especially if they are drawing to the second-best hand.

If you flop a full house, you’re only too glad to have your opponents take a card or two in hopes of improving to a flush, since it will only cost them more money when they complete their hands.

Slow-Playing is More of an Art than Science

Slow-playing requires making some fine and discerning judgments. Sometimes you’ll decide to take a risk in order to build a bigger pot that you think you’ll win, only to have your opponent catch a miraculous card that winds up snagging a huge pot – one you thought was really yours – if only you hadn’t been greedy.

As a general rule, the stronger your hand when measured against hands that could be made given the current composition of the board, the more risks you can take by slow-playing. But when the board supports a number of draws that could conspire to take the pot away from you, you’re probably better off betting enough to price your opponents off their speculative hands.

Unless you have such a big hand that your adversaries can’t beat it regardless of the cards that come on subsequent wagering rounds, slow-playing is always a sword that cuts both ways. Good poker players understand when to price their opponents off drawing hands and when to let them catch up a bit, so they can stack them off on subsequent betting rounds. 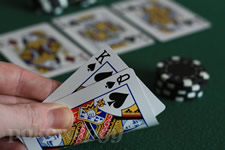 Slow-playing is more of an art than a science and requires making some fine and discerning judgements.