How to Play Five-Card Draw

Long before there was Texas hold’em, Omaha and all the rest of the poker games played today, there was the granddaddy of them all – five card draw poker. As recently as the early 1990s, the first poker game that parents taught their children was usually 5-card draw – mainly because it’s a simple game to learn. We assume you’re familiar with the basic rules of poker as we won’t be explaining all the terms in this lesson.

An example of a five-card draw hand, after the inital deal:

The example above shows a hand of draw poker using blinds instead of antes, just like flop games such as Texas hold’em and Omaha.

The Betting Rounds and the Draw

Draw poker has no exposed cards and there are only two rounds of betting, one before the draw and one after.

After the initial betting round is completed, it’s time for the draw. Each player has the opportunity to replace (called the draw) his cards to improve his hand. They may discard any number of their cards in exchange for new ones, although some variations limit the draw to a maximum of three cards. A player may also opt to keep their original cards if they prefer. This is called ‘standing pat’.

After the draw a second (and final) round of betting takes place, resulting in a showdown with the highest poker hand winning.

There are many variations of five card draw and one of the best known versions is ‘Jacks or better’. Starting with the first player to the left of the dealer, a player needs to hold at least a pair of Jacks in order to qualify to open the pot. Players are also allowed to split openers but need to announce that is what they are doing and put the discarded card on the side to prove they did have openers at the end of the hand. This might occur when the opener has a pair of Jacks and four of a suit and elects to draw to the possible flush.

Strategy Tips for Jacks or Better

Since there are only two rounds of betting you need to make the most of them. If you have no need to disguise your hand then you should draw the maximum number of cards to enhance your odds of improvement. If you desire to disguise your holding for strategic purposes, you may draw a different number of cards. As an example, if you hold three of a kind, instead of drawing two cards you might draw one. Your hand now looks as if you have two pair or a four card draw to a straight or flush. In fact, the odds that you will draw to a full house are actually slightly enhanced with this move. Of course your chance to draw quads sky rockets.

Don’t bet into a one card draw without a made hand. Your trips might beat your opponent’s unimproved two pair but usually you will only get called or even raised by a superior hand. Check and call to snap off a bluff on occasion.

Don’t try to outdraw the opener. This is obvious but often ignored by players that have too much gamble in them. It’s an uphill struggle that is usually lost. Save your chips for a better spot.

If the pot is already opened, raise with any two pairs. However, if your two pair is Queens up or better and you have players behind you to act then slow play.

There are strategic concepts and odds involved that apply to all forms of poker. As with any draw game, there are two main ways to mislead your opponents: one is by how you bet and the other is masking the true strength of your hand by how many cards you draw. But with only two rounds of betting, it’s easy to see why five card draw poker has fallen out of favour for the more action packed poker games.

Five card draw was the genesis of modern day poker but has fallen out of favour for the more action packed versions. While old timers who have been playing poker for decades remember draw poker well, many of the young newcomers are not familiar with it as it is rarely played these days. The game can become one of much dealing coupled with infrequent confrontations involving significant pots, hence the main reason it has lost favor to more exciting forms of poker. 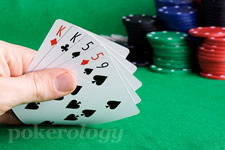 Five card draw was the genesis of modern day poker but has fallen out of favour for the more action packed versions.