How to Play Five Card Stud

There was a time when five-card stud reigned supreme and was considered the game, but over the years it has fallen out of favour along with five-card draw for more intricate and exciting forms of poker. It was the forerunner to today’s seven-card stud and all its iterations.

The typical setup of five-card stud is as follows:

An example of a five-card stud game, when the antes are posted:

The above example shows players posting a $0.25 ante, in a $2/$4 game. This gives the players something to shoot for right from the start. After the antes have been posted the player with the lowest up card is obligated to ‘bring it in’. He must open, he cannot check. The cost of the forced bet is less than the small bet, so in a $2/$4 game it would generally be $1 for the bring in.

In the above example it’s easy to work out the best hand the player could have; trip 9’s. They may also have an Ace or two in the hole for two pair.

The key strategies are not numerous and are easy to learn resulting in a rather straightforward, somewhat boring game unless you’re fortunate enough to have a few fish in the game that don’t quite understand the concepts we will share.

The number one major tip for five card stud – the way to win at this game is to fold if any opponents’ up cards beat your up and down cards. This usually means that you need a pair or an ace or king in the hole to call that first significant bet. The odds that starting with two unpaired cards, lower than kings, that you will wind up with a pair in five cards is less than even money. This means that more than half the time you won’t even be able to beat Ace or King high. In addition, if you do pair a lower card you may still lose to a higher pair. Tight is definitely right in five card stud.

Having an Ace in the hole is better than any other start, including pairs, with the exception of a pair of Aces.

Chasing straight or flush draws as the reason to continue with a hand is folly and the quickest way to go broke in this game. If your hand has other attributes, such as high cards, then there is added value and continuing may make sense. Therefore, avoid low straights and flushes!

If you have bet an open pair on the board which was called by an opponent who has unpaired higher cards showing – do not initiate another bet. Fold with a hidden pair if an opponent with a higher card showing is betting or raising.

Never bet into an opponent who can know that he has you beat at the time of your bet. With only one unexposed card recognize the potential nuts. For example: Imagine that you have wired Kings with a Jack, nine and seven and you’re up against a lone opponent who is showing an Ace, Queen, six and three. Your pair of Kings may well be the best hand but you should neither bet if he checks or raise if he bets. In this case your opponent can be absolutely positive he holds the best hand, if he has an Ace in the hole, while you will be guessing. If these guidelines seem too conservative for your tastes then five card stud is probably not the game you will most enjoy.

While by today’s standards five card stud is not an action packed game, when it was first developed it was considered to be so because it added two more rounds of betting and a lot more information due to the exposed cards. It was considered a poker championship race horse compared to the tired old nag of draw poker.

Five card stud rewards patience and when played well it can be truly boring. If you are sitting with a group of accomplished players the money will move with the luck of the cards, since the successful strategies are so simple, and there isn’t much you can do to overcome this through skill. It is for this reason that five card stud will never enjoy a resurgence in interest. 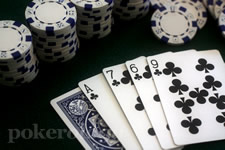 The key strategies are not numerous and are easy to learn resulting in a rather straight forward, somewhat boring game.