How to Play 2-to-7 Triple Draw Poker

In this lesson we will examine the basics of 2-to-7 Triple Draw, which is a form of lowball and is sometimes referred to as “Kansas City Lowball”. In this game players have the opportunity to discard and draw to try and improve their hands – although the objective of 2-to-7 Triple Draw is to make the best low hand.

In 2-to-7 Triple Draw, aces are always high and flushes, pairs and straights count against a player’s hand. Under these rules, 2-3-4-5-6 is not a winning hand (because it is a straight). Players must break up their pairs, straights and flushes and hope to draw low cards to improve their hands.

It can be any combination of suits (without making a flush) and these are the lowest five cards that don’t contain a pair or make a straight or a flush.

The typical setup of 2-to-7 Triple Draw is as follows:

After the deal there is a round of betting. At the end of the first betting round, the first active player to the left of the dealer button can choose to draw cards to improve their hand. The player can also choose to “stand pat” and keep the hand as it is. Each player is in turn afforded the same opportunity of drawing cards.

After the first drawing round, another round of betting occurs, starting with the first player to the left of the dealer button. Once the players have called all the bets, players can choose either to draw again or stand pat.

Here are some examples:

This would win against the following hand:

The first hand wins because it has the lowest high card (a nine vs. a ten).

If two hands share high cards of the same value, the next-highest card breaks the tie. For example:

If hands share the same two highest cards then the winner would be determined by the third, fourth and then fifth card if necessary.

As with many lowball-type games, the drawing strategy may appear counterintuitive to players accustomed to games where high cards, straights and flushes are winning hands.

Players accustomed to Texas Hold’em and other stud games often encounter obstacles when making the transition to draw poker, primarily due to a lack of information about their opponent’s cards. Players therefore need to rely on the betting patterns and drawing habits of their foes. When a hand reaches a showdown you will get to see the hands your opponent plays. This is critical information that will help shape your strategy – provided you have been observant and studied your opponent’s betting patterns, drawing habits and other subtle clues.

With the widening popularity of poker games like Texas Hold’em and Omaha, players can easily forget about the other varieties of the game. For players looking for a break from their regular game, 2-to-7 Triple Draw can prove both an entertaining distraction and a fascinating challenge. 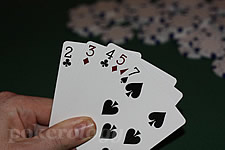