As a poker player you will have experienced times when you made the correct decision only to have the results make you want to punch the wall. Poker is a game with variance, meaning that things are going to happen that go against the odds of them happening (sometimes seeming like they defy all possibility). However, as long as you are making decisions that have a positive expected value (+EV), you will be profitable in the long run.

What exactly does expected value mean? Basically, if you were to flip a coin and someone offered you $1 for every time you called heads or tails correctly and there were no penalty for guessing incorrectly, that would have a positive expected value. Since there is an even 50/50 chance of earning $1 each flip, you can say that the EV of each flip of the coin is + $0.50.

Now let’s say you are given $1 if you call a coin flip correctly, but you have to wager $0.55 each time you flip the coin. You would not want to make this bet because it has a negative expected value (-EV). Over time, you would lose an average of $0.05 on each flip.

Playing Poker for the “Long Term”

Using the same coin flip analogy, in a sample size of 10 trials there are going to be times when heads comes up all 10 times. You know each time you flip the coin the odds of it coming up heads are 50%, but over the course of this relatively small number of flips the results seem to defy the odds. However, if you extend the number of flips to 100 or 1000 you will get closer to an accurate result of 50/50.

So that is what the “long term” is in poker. If you make the same play over an infinite number of trials, the resulting amount of chips you earn over time is either going to be positive or negative. Because the distribution of cards is random, there is rarely a guarantee that you will have the winning hand until all the cards are dealt. So in any given hand there is always a probability that the best hand can end up losing and the actual results deviate from the way the odds say they should. In hold’em, a pair of Aces is about an 80% favourite versus a pair of Kings pre-flop. That still means that 20% of the time the pair of Kings will win. But in the long run the Aces have a positive expectation to win.

Getting the Most Value Out of Hands

Expected value is not just about a singular outcome (winning vs. losing), but it’s also about maximizing the value in every hand you play. This means squeezing the most value out of hands when you are ahead and losing the least when you are behind. It can also mean knowing how much to risk on a bluff where the percentage of times it will work and the value of the pot makes it profitable in the long run.

How to Squeeze Maximum Value

Let’s look at a hand example to illustrate…

The following hand example will demonstrate how to squeeze maximum value against a player on a suspected drawing hand. Importantly, you already know that this player likes to play suited cards and likes to chase draws. Before the flop, your opponent in middle position limps and you elect to call from the button with

. The small blind completes and the big blind checks.

The flop is dealt and everyone checks to you, as shown in figure 1 below:

Jackpot, a set! But wait – what if someone has a flush draw?! Should you be afraid of someone drawing to another heart and try and shut the hand down right now by putting in a big bet? No, you shouldn’t. This is a very common mistake. Many players see the potential flush draw and overbet the pot or push all-in to “protect their hand”. Protection is incorrect thinking because it doesn’t maximize your expected value. If you try to shut the hand down now with a big bet you will lose money in the long run. Does this mean you should slow play by only betting a small amount or even checking? No, it doesn’t. It means that you should bet the maximum amount that you think someone will call to draw to their hand and make an incorrect decision.

For someone to correctly draw to the flush with one card to come, they need 4-to-1 odds. So in this case, the pot is 200. If you bet 50 trying to slow play, the pot will now have 250 and it will cost them 50 to call giving them 5-to-1 odds (250/50 = 5/1). This would be a correct decision for them to call and would be –EV for you because they will hit their draw better than the 5-to-1 odds you are giving them. So, what is the correct amount to bet? This depends on your opponent. If you know someone likes to chase draws, you should consider betting around the size of the pot. If you know they will only call a reasonable sized bet, then you should bet enough to give them about 3-to-1 odds. This would be an incorrect call on their part.

There are additional factors of implied odds to consider here, but that is for another lesson. In this case, you know at least one of your three opponents likes to chase draws, but you can’t be sure he has one now. I would bet around 100. This will make the size of the pot 300 and will give someone 3-to-1 odds to call. The guy in middle position who likes to chase, calls.

The turn is a ten of spades and our opponent checks:

How much should you bet here on the turn to maximize EV? Well, you can be pretty confident that your opponent doesn’t have a King because they would have likely bet the flop against three opponents. While they could have a straight draw if they had a hand like 45 or 34, the most likely hand your opponent has contains two hearts including AX and connectors such as

. If he does have

, he now has a pretty big draw and is unlikely to consider folding. But we don’t know that for sure, so we have to bet an amount that maximizes our EV against a range of drawing hands. The pot is now 400 and our opponent has 2,850 left. Based on our opponents tendencies, I would bet around the size of the pot, so let’s make it 350. Our opponent calls.

The river is a beautiful

His bet lets us know that he likely has the flush. He could also have a King, but it’s not likely based on his previous actions. Either way, we’re in a great situation.

Now, how do we get the most out of this hand? After his bet of 600, there would be 1,700 in the pot and it leaves him with 1,900. Many beginning players will raise the minimum here because they are afraid of making their opponent fold. But that is leaving money on the table.

Players who often chase draws will not fold when they make their hand. They feel emotionally attached because they have already spent a lot of their stack to get there. Also, we have 1,900 left and if we just raise the minimum to 1,200 we are committing most of our stack which looks like we have a huge hand. I would think for a few seconds and then push all-in. Our hand is pretty concealed and it looks like we have a King, so it’s highly likely we’ll get called here. Our opponent calls showing

and we rake in a monster pot.

Since you cannot control the final outcome of any given hand, the goal in poker is not to win every hand, but to make decisions that have a profitable expected value. Sometimes luck is in your favour and sometimes it’s against you, but if you are making +EV decisions that is what makes you money in the long run. It is important not to let negative results get you down or hurt your confidence in your abilities. Just remind yourself that you wanted that donkey to call you down with bottom pair because even though he spiked two-pair on the river this time, he is your personal ATM if he keeps making that play.

A firm grasp of the concept of expected value will serve you well. In our next lesson, calculating EV, we’ll take things a step further and discuss the additional criteria that must be incorporated into your decisions. We’ll also look at some common EV spots in both cash games and tournament poker – all with the intention of positively affecting the long-term profitability of your decisions. 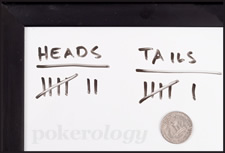 The goal in poker is not to win every hand, but to make decisions that have a profitable expected value.