Professional poker players often describe their vocation as “a hard way to make an easy living”. One of the most difficult aspects of the game that a professional poker player must deal with is the inconsistency in income. Despite employing a strong skill set and the benefits of years of experience, many poker players still come home with less money in their pocket than when they arrived at the tables. These ups and downs of poker are often collectively known as “variance”.

In statistical terms, variance is used to examine the differences between an individual result and the average for a set of results. These results can be represented as data points in a set to determine the fluctuations within that set.

We’ll demonstrate how to calculate variance with a small sample data set. If you were to track the results for your previous sessions at a $3/$6 fixed-limit hold’em cash game, they could read:

Each of these results represents a data point in a set of seven numbers.

The variance is the sum of the squares of the differences between each data point and the mean.

Follow the same procedure for each result and you get these corresponding numbers:

Add up these numbers and divide by seven to get the variance:

The standard deviation, another measure of volatility, is the square root of the variance:

However, many of these data points lie outside that range. Are these results the products of bad luck, bad cards or bad play?

The more data points a sample size contains, the more accurate and reliable the measurements of variance and standard deviation will be. The seven-point data set included here is obviously much too small to give an accurate estimate of how a player performs at a 3/6 limit hold’em game. Also, more data points will give the player more information on how to manage the inevitable ups and downs involved in cash games.

Variance and the Central Limit Theorem

Another important mathematical concept that comes with sample size is the “Central Limit Theorem”. This concept states that, as the number of data points in a set grows, a plot of those points on a graph will resemble a normal statistical distribution, as seen in the classic “Bell Curve”.

The guiding principle is that, the larger the sample size, the more data points that will fall at or near the average. This measure of variance gives the player a more accurate idea as to what to expect from his results.

Even in the most distinguished poker careers, a player will have sessions where he has wins (or losses) that go two or more standard deviations away from the average. Many inexperienced players attribute these results to luck, but they are within the realm of possibility shown in the Bell Curve. These data points are known as “outliers” and, individually, have little effect on the variance seen over a career. If these “outlying” results continue to appear, however, they may signal the start of a new trend.

A sufficient poker bankroll is necessary to act as a cushion against variance. Some players may believe that, with just a few positive results at a $1/$2 no-limit hold’em game, they are ready to jump into a $2/$5 or $5/$10 game, regardless of their bankroll size. When the variance swings in the negative direction, as it inevitably will, a depleted bankroll could send the player to either a lower-stakes game or out of the game entirely.

Some poker games, as well as some betting structures, are prone to have higher variance than others. For instance, a $3/$6 fixed-limit hold’em game will have much less variance than a $1/$2 no-limit hold’em game due almost exclusively to the betting structure. In the $3/$6 limit game, the maximum bet a player can make on the river is $24 (bet-raise-re-raise-cap). In the no-limit game, a player can bet his entire stack at any time, which may be hundreds of dollars. These bet sizes can cause huge swings in variance.

Despite the allure of fame and glory presented by televised events, no-limit hold’em tournaments are shining examples of the deceptive power of variance. Most professional players (including many famous faces on the tournament circuit) make more of their living through cash games and only enter the most prestigious (and lucrative) tournaments due to the high variance involved. Most major tournament winners are “outliers”, as up to ninety percent of all tournament players walk home empty-handed.

In a previous piece, we examined the four primary playing styles (loose-passive, loose-aggressive, tight-passive and tight-aggressive). Just as the tight-aggressive style has been shown to be the most profitable, it also often results in the lowest variance. Both the loose-passive and the tight-passive players depend on catching cards to win hands (a high-variance strategy) while the loose-aggressive style relies on big bets to push players off hands. The tight-aggressive method relies on strong starting hand selection, infrequent bluffs and a well-founded understanding of probabilities, all of which contribute to reducing variance.

The effects of big wins and staggering losses are not strictly limited to a player’s bankroll. The emotional roller coaster that comes with big swings in variance can also affect how a player approaches the game. Players who have become accustomed to big wins may lose their cool when confronted with a crushing loss. One bad session can set a player “on tilt” and wreck both his skills and his confidence.

How to Deal with Variance

Shifts in variance can be as unpredictable and dangerous as shifts in the weather: everybody complains about them, but no one can do anything to prevent it. The most important aspect of success in poker lies in treating each session or tournament as a continuation in one long game. Experienced players understand that their success or failure as a player does not lie in the results of a single tournament or a handful of cash-game sessions. Each session represents only a single data point: a consistent approach will often reduce (but never entirely eliminate) variance.

Former World Series of Poker Main Event Champion Chris “Jesus” Ferguson once said that poker is “100 percent luck and 100 percent skill”. The turn of each card is the result of luck, but how a player responds to that unpredictable event is the product of skill, practice and experience. The ability to manage the game’s inherent variance is a skill on par with calculating odds and outs in terms of how successful a player can eventually become. 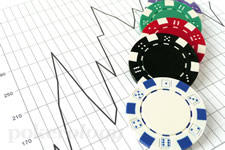 Shifts in variance can be as unpredictable and dangerous as shifts in the weather. Everybody complains about it, but no one can do anything to prevent it.