When you get down to basics, the check raise is simple. You have a good hand with opponents who act after you do – a hand you strongly suspect is better than anything your opponents could possibly hold – but rather than betting and showing strength, you feign weakness by checking instead. When one of your opponents seizes the initiative and comes out betting, you raise when the action gets back around to you. It’s that simple.

All you did was defer your opportunity to act from early position in the betting order as a way of encouraging one of your opponents to come out betting, thus enabling you to check raise and win even more money than you would have if you had been the bettor and he simply called.

Probably the two most common check raising occasions by beginning players is when they make either the best possible straight or best possible flush, or they flop a set by matching a card to their pocket pair.

The check raise is one of the more glamorous and sexier poker skills, and there’s not a player you’ll encounter who isn’t fond of slamming down a check raise when the situation calls for it, simply because it feels so good. Maybe it’s the love of deception in all of us. Perhaps it’s the thrill of getting back at the table bully who has been pounding us with bets and raises, and now we get to turn the tables by raising or reraising, and maybe even stacking off all his chips. We showed him; didn’t we? And boy did it feel good.

When to Check Raise and When to Bet

The check raise, like just about every tactical ploy in poker, is sort of a two-edged sword. For every advantage it offers, there are ways savvy opponents can counteract it and dodge your deftly crafted plot.

Before you automatically check all your sets, straights, and flushes, you really have to decide for yourself whether it’s better to come out betting or run the risk that your opponent will simply check behind you if you check first, thus raining on your check raising parade. Your first step in learning how to check raise unsuspecting opponents is to know when to try for a check raise, and when it’s better to come out betting.

First, and Most Obvious, is to Consider Position

Check raising works best when you’re early to act in the betting order. After all, if you’re last to act and check after everyone else has also checked, there’s no way to get a raise in there except to wait for the next betting round – but in doing so, you’ve just given your opponents a free card by not betting. But what if you’re not first to act and not last to act either? There’s no hard and fast rule here, but in general, the later you act, the more difficult it is to check raise. It’s all a matter of numbers. With fewer opponents yet to act, there’s less chance that one of them will fire out a bet for you to pounce on.

The General Rule on Check Raising

There is a general rule on check raising, and it has two component parts. First, check with the intention of raising only when you believe you will have the best hand most of the time you are called.

Just believing that you have the best hand does not justify a check raise. Here’s why. Your hand probably won’t be the best one every time you check raise, and when it’s not, you’re going to find yourself facing a re-raise. To compensate for this, you should only check raise when you believe you will hold the winning hand if you are called. The only exception to this part of the rule occurs when you believe check raising will cause your opponent to lay down a better hand.

Bluffing with the Check Raise

If you believe a check raise will cause your opponent to lay down a better hand, then check raising can be successfully employed as a bluff. Suppose you have a hand like

and a third heart comes on the turn:

Because you have the Ace of hearts, you know that your opponent cannot possibly make an Ace-high flush. If you check and he comes out betting, you can check raise and put him to a decision. If he hasn’t made a flush, it’s tough for him to call here, and even if he’s made a small one, he might credit you with a bigger flush and fold to a big raise – particularly if you also raised before the flop.

Will Your Opponent Bet?

If you can’t answer a resounding “yes” to both of these questions, you’re better off betting than trying for a check raise:

A Straight vs. a Flush

It’s easier to check raise when you make a straight than when you make a flush. This is because flushes are more obvious to your opponents. Even aggressive adversaries tend to slow down when a third suited card appears. Because they’re betting and you’re calling, they will think you’re on a draw and might just decide to apply the brakes when a third suited card falls.

One way around this is to semi-bluff by betting some of your flush draws, thus convincing your opponents that you have some other hand and are not trying to complete an inexpensive flush draw.

If you’re going to try for a check raise when a third suited card falls, you need an opponent who is aggressive enough to bet right into what might be a completed draw. Sometimes you’ll be able to delude opponents into thinking you have some other hand entirely, but you’ll need some help from the cards to pull this off. Let’s assume you have

. You’re raised. You call, and the flop is

If you come out betting and your opponent holds A-A, K-K, Q-Q, or A-Q, you’ll probably be raised:

Obviously you’ll call in such a situation. By checking and calling if a blank falls on the turn, your opponent might assume you were either trying to steal the pot from early position, “testing” your kicker with a hand like Q-9 or Q-8, or were betting second pair to find out where you stood.

You’re hoping he won’t figure you for a flush draw if you get lucky on the river:

The trap is set because an aggressive opponent will probably bet, and probably make a crying call when you raise, but he’ll pay you off nevertheless.

The Additional Benefits of the Check Raise

Another advantage of betting hands like four-flushes on the flop and checking the turn is that you’ve created some running room to bet other marginal hands on the flop and get a free card on the turn whenever the board is threatening. Check raising helps add deception to your game, and a deceptive strategy will either win additional money from your opponents or allow you to see the turn for free.

There’s a caveat to all of this, and here it is. This only works against sharp opponents who will spend some time thinking about what your hand might be instead of just considering their own cards in a vacuum. When you are able to deceive them, you will have created some additional manoeuvring room for yourself since those opponents will no longer see you as a transparent adversary.

On the other hand, if your opponents are absolute maniacs, compulsive callers, or just brain dead, don’t waste any energy faking them out. They will always follow their hunches, whims, and proclivities, regardless of any seeds of misinformation you scatter in their path.

With a maniac, you don’t need to set up a check raise. He’s going to bet most of the time, and you can snap him off whenever you’re holding a better hand. With a calling station, don’t check raise. Just keep value betting when you have the best of it. You’ll have to show the best hand to win, but you’ll always get paid off. 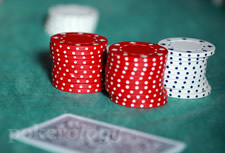 There’s not a player you’ll encounter who isn’t fond of slamming down a check raise when the situation calls for it, simply because it feels so good.