How to Play Aces

Pocket aces are without a doubt the best starting hand one can be dealt in the game of hold’em. Unfortunately, the odds of being dealt pocket Aces is 220-to-1 so it doesn’t occur nearly as often as we would wish. When you are fortunate enough to get them you need to know what to do with them. That’s the goal of this lesson.

How they are played to their optimum largely depends in the setting they appear. You might be dealt them in a cash game, a tournament, heads-up, in early or late position, playing limit or no-limit to name several factors. Don’t let all these variables make you nervous as generally the strategy you should embrace is to raise aggressively pre-flop and to continue to bet and/or raise unless you meet resistance that is supported by the texture of the board.

Before we delve into the nuances of playing Aces to your best advantage allow me a few words on why it should be everyone’s favorite hand. I’ve heard many times how some players tend to freeze up when dealt pocket aces and almost dread playing them. They go on to tell bad beat stories of how they always seem to get cracked and cost the player so much money. This is utter nonsense so if you hear these tales of woe, ignore them. We will show you how to play them profitably and make them your favorite hand.

The whole purpose of playing Aces aggressively is that even though a pair of Aces is the best possible starting hand in hold’em poker, they don’t play well in large fields. You’re a favourite against two or three other players, but when you’re up against four random hands, your Aces become an underdog to the field.

For example, here are the stats when we put Aces up against a selection of four other hands:

Although Aces in this example are by far the strongest hand, they are an underdog to the field. However if we eliminate just one of the hands they become a favourite:

This demonstrates why you should be raising pre-flop to thin the field whenever you get dealt pocket Aces.

Avoid the Temptation to Slow Play

Many poker players choose to slow play pocket Aces, particularly from early position by just limping in. We all know how annoying it is to raise with Aces only to pick up the blinds and get no further action – which is why it’s so tempting to slow play. However, you avoid this temptation unless you know for sure that someone to your right will raise for you, and the worst possible scenario is to limp in and then witness everyone else doing the same.

If you decide to slow play Aces and it backfires, with four or more others calling then you have to be prepared to dump your Aces after the flop. If you are the type of player who slow plays Aces then you should question the reasons why. If it’s because you fear that by raising others will put you on such a strong holding due to your tight table image, then you should have been mixing up your game already.

Your Bets Tell a Story

You should also avoid the mistake of raising just the minimum, as this stinks of a big hand such as Ace or Kings. Remember that your bets tell a story and by raising the minimum you’re effectively telling the table that you want action. You also want to avoid allowing other players to see a flop cheaply with pre-flop junk, which may later turn into an undetectable monster. The ideal scenario is to thin the field to only one or two opponents. There are no money back guarantees in poker but what you’re hoping to accomplish is to get heads up with a lone opponent who in all likelihood will be holding AK, AQ, KK or QQ.

As you can see, pocket Aces have these hands thoroughly dominated.

One of the big decisions when holding Aces is when the board has an obvious flush or straight draw and your opponent gets very aggressive with a big bet. You can always take the safe route and fold or you can come over the top of your opponent’s raise making sure he does not have correct odds for his draw. Don’t forget to factor in the other potential reason he has become frisky. He could have flopped a set or two pair and he might be trying to push you off your hand. He may envision you to be on a draw.

As pointed out, there are no money back guarantees in poker. Even with the best starting hand in hold’em you need to understand your opponent’s capabilities. Would he really put that many chips at risk on a draw? Does he have two pair or a set which means you would be drawing thin?

You’ll really know you’ve arrived at a new level of poker expertise when you finally muck pocket Aces on a non scary board. A beginner to poker would never even entertain such an act, which on occasion, is the best course of action.

Many times, much to the chagrin of their holders, Aces win small pots and lose big ones. The players that keep that vulnerability in mind as they devise their strategy based upon multiple critical factors which will impact the play of the hand, are the ones that win big pots and lose small pots with Aces. Next time you’re fortunate enough to be dealt a pair of Aces take a moment to decide upon the best way to proceed based on the variables at your disposal, as opposed to your less erudite, one dimensional opponents. 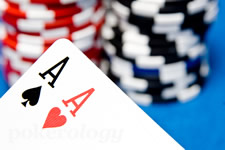 Many times, much to the chagrin of their holders, Aces win small pots and lose big ones.