The key difference between full ring and shorthanded cash games involves the number of poker players. Full ring is essentially a standard poker game where nine or ten players are seated. While some poker rooms offer a maximum of five seats in their shorthanded cash games, most are usually limited to a maximum of six seats, which is why they are commonly referred to as “6-max” tables.

The 6-max cash games are hugely popular online. Some poker players prefer these shorthanded cash games simply because they like to play against fewer opponents and they get to see more hands. Others prefer the standard full ring cash games, perhaps because they’re more like the cash games that are found in live poker venues.

Even though the only difference between the two formats is the variation in table size, they play very differently.

Full ring cash games allows a player to play tight by being conservative with their moves and holding out and only committing when a very strong hand comes their way. Since the blinds are paid more frequently and there are fewer players in shorthanded games, starting hand values go up significantly. When you play 6-max cash games you need to play more poker hands and play them more aggressively. Anything that is playable in mid-position in a full ring game is generally playable in any position in 6-max games. You’ll also find that you can be the first raiser much more often when in late position, simply because there are fewer players.

Without a doubt, one of the most important separations between a full ring and a shorthanded game is the level of aggression. If you’re making the switch from full ring to 6-max cash games then you already know that you need to open up your range of starting hands. Aggressive play is always important in poker, but even more so in shorthanded games because you must maximize your ability to play and win with marginal and lighter holdings. This does not immediately relegate the more traditional full ring conservative players, but overly tight play will certainly can count against you. In the same vein, shorthanded games can sometimes tempt players to loosen up too much and play too many weak hands, which can lead to their downfall.

Position is important in all forms of poker as it is obvious that it is more desirable to act last rather than first. Playing a hand from early position In a full ring cash game is a much bigger disadvantage than in shorthanded games, since there are more opponents who can enter the pot after you’ve acted. However this doesn’t mean your table position should be disregarded when playing 6-max. Players are more likely to miss the flop in shorthanded games which makes position very valuable post-flop. If you’re out of position then you’re opponents will have more opportunities to exploit you by stealing pots when you miss the flop.

6-max cash games are more profitable for skilled poker players. If you’re fortunate enough to be seated with an inferior opponent then you’ll be involved in many more pots with them. This means you can exploit your edge over these weak player far more than you ever could in a full ring game, simply because there are fewer competing players. The skilled poker player also benefits from playing 6-max games because of the wider range of hands that are played, and the knowledge of how to play these hands against weaker opponents, who might be clueless.

Although there are increased opportunities in shorthanded games and it is generally easier to bluff, you need to temper this with the realization that your fellow poker players know that aggressive play is the order of the day and you’ll get called much more frequently. That is the bad news – the good news is that due to the prevalent mind set in shorthanded games your value bets have a much higher likelihood of being called.

In shorthanded games you may be able to confuse your opponents by making value bets that are larger than normal. These larger bets may seem like bluffs as they appear to be discouraging a call. The contrarian nature of poker (strong is weak and weak is strong) many times makes an opponent even more willing to call. Try betting about one and one half times the pot as a value bet and you might be surprised at how often you’ll be called.

You’ll experience larger swings in shorthanded games. This is simply because players will be involved in more pots with weaker hands, and betting them more aggressively. Your style of play will influence how much variance you personally experience. If there is greater variance in shorthanded games, then it stands to reason that handling the highs and lows will require a larger than normal bankroll than full ring games.

What Should You Play?

This will depend on your style of poker and your thirst for action. If it’s action you crave then shorthanded play should be your game of choice. By nature of the fewer number of players, you will be forced to play more hands than when at a full table. The playable hand values go up significantly and since there are less players to act behind you, aggressive play is essential. You simply cannot just sit there and wait for premium cards.

If you’re starting out then it’s generally better to begin by playing full ring games. This will allow you to build a solid foundation and learn the basics of good cash game play with less risk to your bankroll and your ego. Once you’ve gained the necessary experience and skills you can then progress to the shorthanded 6-max tables and get a feel for what kind of mixture of patience and aggression that’s required to succeed. 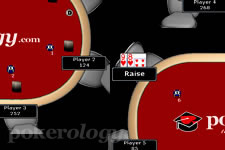 6-max cash games are more profitable for skilled poker players due to the increased opportunities.