How to Play Seven Card Stud

Seven card stud (also referred to as 7 card stud) is similar to Texas hold’em in so far as you use your best five cards out of a total of seven to make your best poker hand. All the hand values remain the same, as it is still poker. However, it is not a board game like hold’em that has common cards that everyone can use. Each player receives his own seven cards that are not shared. While hold’em is often a game of high cards, seven card stud is a game of live cards – so remember to keep an eye on what’s been mucked and commit this information to memory.

Please note: this lesson assumes that you already know the rules of poker and are familiar with how to play Texas hold’em – including an understanding of poker hand rankings and other basic concepts.

The typical setup of 7-card stud is as follows:

An example of a seven-card stud game, when the antes are posted:

Seven-card stud can be played for all sorts of stakes. A $2/$4 game would generally have a $0.25 ante – and this gives the players something to shoot for right from the start.

The lowest face up card is forced to ‘bring it in’ meaning they are obligated to make a bet. The forced bet in a fixed-limit game is generally lower than the small bet. For example, in a $2/$4 game the forced bring in would usually be $1.

If two or more players share the lowest ranked card then suits are used to determine which card is lowest. From highest to lowest, suits are ranked as follows;

clubs. The lowest card in the deck is therefore the

. If that card appears as one’s up card, which is called your door card, that player is forced to make a bet.

There are five betting rounds in seven card stud versus only four in hold’em. After the bring in has been posted the action moves clockwise around the table. Players can call the initial bet, raise, or fold. When an opponent folds his cards are mucked, including their door card. Remember the exposed cards – as you may need one of that suit or rank later in the hand.

After this initial round of betting, called third street, each poker player who is still in is dealt another face up card called fourth street:

There is a round of betting and then another up card is dealt to each live player, called fifth street:

On fifth street the betting limit doubles. In a $2/$4 game, the minimum bet would be $4. Another betting round ensues and the sixth street card, which is the final up card for all to see, is dealt:

After another round of betting the final card, seventh street, or the river, is dealt:

The final card is dealt face down giving each active player a total of three down/private cards and four up cards for all to see. A final round of betting ensues and then the showdown.

As you can imagine there are many surprises at the river in seven card stud. This nuance of the game should alert the astute reader that your opponent’s betting patterns may well be worthy of more scrutiny than in hold’em.

Hand reading becomes much more of an art in seven card stud than in hold’em since each player ends up with three private cards. In our example the player could be have A-T and have a straight. It’s also possible that a player could actually hold a full house or quads (four of a kind) without a pair showing.

The value of live cards is the main reason seven card stud is a more difficult game to master. In hold’em the board is always there to refer to as are your two hole cards. In seven card stud when an opponent folds his cards you need to remember them as you may need one of that suit or rank later in the hand. This concept of “live cards” is critical to playing stud well. 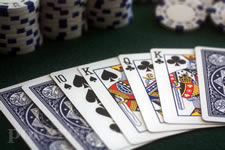 While hold’em is often a game of high cards, seven card stud is a game of live cards.