When to Move Up in Stakes

There’s really only one way to know. You must keep track, down to the dollar (pound, euro, yen, peso, or yuan will do too), of how much you win and how much you lose in each poker session. If you’re playing online then be sure to use poker tracking software – because statistics will not only let you know where your strengths and weakness are in your game, they will assist in your decision of what games to play and when to move up to the next level. By reviewing your playing history you’ll be able to see how you are doing per hour and per big blind or buy-in size.

If you’re a tournament or SNG player then you should look at your return-on-investment (ROI). ROI refers to the net profit you’ve earned playing poker. Divide any profit by the gross amount you’ve invested and multiplied by the number of games you’ve played. A ROI of 0% would indicate that you’re breaking even. Let’s suppose you’ve played a 1,000 of your favourite $10 SNG’s, spending $10,000 in the process. Over this period of games you’ve made a profit of $1,500, meaning your ROI would be 15%.

Hopefully you’re win rate or ROI is positive because if you’re not beating your current game then, most of the time, it’s a mistake to move up. There are many benchmarks, formulas, statistics, and graphs available to judge yourself and other players – but it’s better to concentrate on finding the games that maximize your dollars per hour played and grow your bankroll that way.

You should be beating the lower stakes games first. There’s one exception to this that I’d make. Lower stakes poker games can be more heavily raked than the higher stakes games. This is a function of how the rake is calculated. When this is the case, it may make sense to move out of the lowest, and thereby most heavily raked game, as soon as possible, even if you’re not beating it, – just to avoid getting crushed by the rake.

If you just had a winning session of $180 in 4 hours of $50NL, that doesn’t mean that you are beating the game. If you just finished a session of 300 hands of $200NL and doubled your buy-in of $200, that doesn’t make you a winning poker player. Similarly, if you just won a bunch of $20 tournaments in a row, it doesn’t matter. You might have just gotten lucky in each example. Generally speaking, to be really sure that you’re beating the game you’re playing in you need a much larger sample size – 10,000-30,000 hands is considered enough play to gauge how you are really doing in cash games – and 1,000 games for tournament players is a decent sample size.

Some poker players are nits or rocks. They win small amounts by risking very little. They have little variance since they play a solid game and take very, very few chances. Other players are plungers. They take huge gambles – even with only very slightly the best of it. If you have a high variance style of poker – say you’re a maniac, then you’d want to start with more. The former players will need less of a bankroll to move up than the latter players because they will show much less variance at the higher level – and will therefore have a much lower risk of running through their bankroll if they run bad for a while.

How much money do you have to play poker with? To decide whether you can sustain the variance of a bigger game you need to know what your poker bankroll is and how easily can you replace your playing bankroll? For some, getting $1,000 to play is simple. They have that in stray bills lying around their house – even with no official bankroll. For others, putting together even $50 is difficult. Knowing whether or not you can move up depends on your understanding how easy or difficult it will be to reassemble your playing bankroll if you lose it all at a higher stake. If it is easily gained, then you may play higher than if it is very tough to accumulate.

Calculations vary for determining what bankroll you need for different levels and while that’s not the focus of this lesson it’s worth going over some numbers yet again. So here’s some bankroll management advice:

The ability to replace a bankroll increases as you play higher. You must be much more conservative in your estimates of what you need as you move up. Similarly, the idea is to have enough money to protect yourself from losing all of it at a few awful sessions.

Psychologically a poker player is ready to move up when they feel comfortable to do so. When a player feels uncomfortable, they often play weak poker.

It doesn’t matter whether or not you have enough money, theoretically, in your bankroll to play at a higher stakes if you, psychologically, don’t feel comfortable playing at that level. There are millionaires, even billionaires, who just don’t feel comfortable gambling higher than $3/6 limit or $1/2 no limit. Sure, they could afford stakes higher – much higher in fact. But for whatever reason, they just don’t like to gamble with that much money.

If you don’t feel comfortable making a bet because the stakes are too big for your brain, then it’s unlikely you can play that high – period!  However there are always exceptions to every rule, and if you are a tight, timid, winning player, then consider forcing yourself to move up. You can always move back down if you are not successful at the new limit, or if you’re psychologically uncomfortable.

There’s a major exception to all of these rules and bankroll requirements. You can test the waters in a higher stake game any time you want. You don’t need a pre-determined amount of money; you don’t even have to be a winning poker player in your current game. You can just buy-in for whatever the minimum is, see how you do, and then move back whenever you want to.

There’s much to recommend taking brief stabs like this at bigger games. First of all, it may help you overcome the psychological difficulty of moving to a larger game in the future, when your bankroll and win rate justify it for the long term. It may even help you in your current game, if you tend to be too tight and worry about the money too much. Playing bigger, even briefly, may be like warming up in the on deck circle with a leaded bat. Your swings seem easier when you pick up the regular bat.

Of course there are some disadvantages as well. If you’re playing poker way over your head, without a large bankroll, you may well be playing at a large disadvantage – either tightening up or just gambling because the stakes are too big for you. Similarly, you may cut your session unreasonable short if you start out with some bad luck in the bigger game.

Ultimately, you can move up when you are financially, psychologically, and skilfully able to do so. All of the above information is meant as a guide but not a cookbook for how to do that.

Know your success rate at each limit and for each type of game. The more a player analyzes and find leaks in one’s game, the faster a player can move up to the next limit. This is crucial in helping you to establish what kind of bankroll you might need. But do not necessarily change your game. It could be just the gremlins of fluctuation.

Keep statistics of your poker sessions, and you’ll then have a better idea of what size bankroll you’ll need in order to continue playing the games you already play, and whether you can afford to move up to bigger limits, and bigger buy-ins. Keeping a record of your play will allow you to make faster and better decisions and thus help advance your poker bankroll.

The fastest way to move up is to study a little, play a lot of poker, study a little, and play even more. What could be more fun than playing poker? At each level make sure to check your win rate or ROI – and if necessary, don’t be too proud to move down in limits. This game takes even the best of poker players for big swings. Therefore, a big reserve is good for your psyche whether losing or winning. 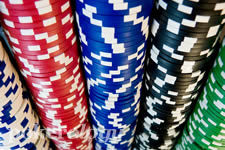 You can move up when you are financially, psychologically, and skilfully able to do so.