Commonly mentioned but often forgotten, bankroll management is one of the skills that many poker players always talk about improving but never take any steps toward that goal. We always seem to hear about the players that find a huge rush or hit a big score and then end up right back where they started. These players might make a big withdrawal but then try to play stakes that their bankroll can’t support, or they believe they can take the next step and lose all their former profits chasing that next heater.

How is it that these players end up repeating these same mistakes over and over again? As with most things in life, they have failed to have a plan in regards to cashing out a reasonable amount of their profit over a period of time. This is precisely why using a cashout system can be so effective.

What is a Poker Cashout System?

The main key to the poker cashout system is volume, or in other words; the actual amount of games you play. The more games that you play, the more you would pay yourself for your play. This is done by withdrawing a set percentage of the buy-ins you spend for each Sit-n-Go (SNG) or Multi-Table Tournament (MTT) that you play. Notice I haven’t mentioned anything about how much you’ve actually won. Your long-term profit will be the main force behind your bankroll growth.

How is this done? Simply put, you pay yourself a certain percentage of the buy-in of a particular game based on the size of that game. The percentage that you would earn would be higher for the larger MTTs while being relatively smaller for single-table games and smaller multi-table SNGs. This is because the largest scores come from the larger tournaments, while smaller games need to be grinded out over a period of time to generate the same amount of actual profit.

Generally you would want to pick a percentage that is no more than half of your expected ROI for that type of game. Often you would select a number a good bit lower so that you can more aggressively grown your bankroll over the long term. For example, you might break down the percentages you pay yourself in the following manner:

Personally, I’ve always used 3% as my payout percentage for all the 6-man and 9-man SNGs that I’ve played, just like in the list above. If I were to play a $55 SNG, I would “earn” $1.65 for that game. I pay myself this same amount each and every time regardless of any of the results for these games, no matter how many I play. My goal in these games is to make at least a 6% ROI so that I not only cover the expense of my cashouts, but I also can leave the rest of that profit in my bankroll so it can grow. By doing that I can work my way up to higher games, assuming I feel I have the skill level to beat those games that my new, larger bankroll can afford.

How Does it Work in Practice?

Advantages of Using a Cashout System

The main reason is discipline. Often, players will hit a bad streak either due to bad beats, bad play, or some combination of both. In their rush to win back what they’ve lost, these undisciplined poker players often play in higher stakes games, with hopes of hitting that rush at the right time and make back what they’ve lost (and hopefully more!). Instead they usually find themselves over their head in a game full of players with more skill than they can handle and end up in a even further hole… or bust.

Another advantage in using a cashout system is the fact that you will always see something coming out of your effort. Since you pay yourself based on the amount of games you play, like piecework, you will always see money coming from your poker playing and into your life. Even when things might not being running that well on the tables, at least you know that by putting in the time and effort you’ll be receiving something from that effort. Having a consistent stream of “income” from poker will have a positive effect on your long-term outlook and can also reduce the stress of “having to hit a big score” just so you can afford to make a withdrawal for your bills or to pay for a vacation.

The cashout system can also help a player’s motivation. All of us hit dry spells and downswings and often it can be tough to sit down and play for hours on end when it feels the world is out to get us in every way possible. However, knowing that you are going to be getting paid by volume, not expected profit, can help to temper these tough times and keep you going. While some players will be stressing over the idea that they have to win so they can eat, we’ll know that all we have to do is keep playing enough volume to reach our income goals. The winning will come on its own through our skilled play over time.

Pay Yourself Anything Based on Volume

Other than cashing out based on a percentage of your buy-ins you should also be paying yourself any money you receive that is based on volume. This means any kind of VIP rewards you might earn from the online poker sites would be cashed out. Since bonuses are cleared based on the amount of rake that you pay to the site, bonus money would also be part of your cashout as well. If you receive anything of value because of how much you play poker, not how well you play, then it should be going into your cashout.

Using the Cashout System as a Planning Tool

Planning your minimum income expectancy is also made much easier when using a cashout system. If you decide that you need to bring in a minimum of $300 per week by playing poker, you can determine just how many games at a certain buy-in level and size you need. For instance, to make $300 a week, you could play 500 SNGs at a $20 buy-in each. If you receive any bonuses or rakeback, you could calculate how much of those you would earn. As mentioned in the paragraph above, these are volume rewards. You would get to pay yourself that money and then determine that you could play less to make that same $300 a week. You could do this for planning each week, month, or even an entire year if you wanted to since everything would be based on how much you can play, not by how much you have to win.

For the Pros and Grinders: Ceiling Cashouts

For the poker pros and major grinders, bankroll growth might be of minimal importance. Some poker players have already gone through this stage and are simply grinding out their best games over a long period of time. For these players a ceiling cashout could be used to pay themselves either a large portion or all of the profit they might make above the base cashout that they would normally take.

Let’s take a 180-man SNG grinder with a bankroll of $6000. For now, he is content with grinding out a living playing the $12 games, but does want to be able to add the $36 games sometime in the future. This player might elect to place a soft ceiling on his bankroll of 50%. What this means is that after he pays himself his normal cashout, he’ll then pay himself a “commission” of 50% of his remaining profit, then leave the rest alone as bankroll growth. Once he pays himself that ceiling cashout, his new bankroll number become his “ceiling”. If his bankroll is lower than his ceiling number, he doesn’t receive a ceiling cashout. Your ceiling will always be the same as your bankroll’s career high.

A player may go several weeks before breaking his ceiling again, other times he may do it for several sessions in a row. In using a ceiling it is important to realize that a ceiling number just doesn’t often move very much and can sometimes hold at the same level for long stretches during bigger downswings. This is where being properly bankrolled for the games you play and grind is very important to being a successful and profitable player.

Is the Cashout System For You?

Yes, everyone can use it. You don’t have to be a poker pro or a grinder to take advantage of what a cashout system provides. Even a very casual poker player that simply wants some structure and guidance in his bankroll management can apply what has been discussed in this lesson. While not all players are going to profit all the time, everyone can still benefit from the system.

In short, just remember that anything that you receive strictly because of how much you play and not from actual winnings should be paid out to yourself. Any profit (earnings) that you have left over after you’d paid yourself a cashout would stay in your bankroll. Simply put, your bankroll growth is your profit, less volume cashouts. As long as your profit outruns your cashouts, your bankroll goes up at a pace that will generally keep up with your skill level. 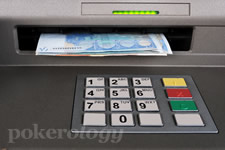 You don't have to be a poker pro or a grinder to take advantage of what a cashout system provides.