Poker and the Art of Representing

A theme throughout many of our poker lessons is that the actual strength of your cards is one of the last things you should think about when making a decision in poker. What makes poker so special is that it’s both fun and profitable to deceive your opponents.

The crux of this poker lesson is how to play opponents who are capable of second and third level thinking. As a refresher, second level thinking is “what does my opponent have?” and third level thinking is “what does my opponent think I have”. In order to represent a hand, your opponent must at least be capable of thinking about your hand and not just his own. Additionally, in order to represent a hand you must be able to think on the third level yourself. This means that throughout the entire hand you must be aware of all the factors your opponent is using to make decisions. This includes your table image, your opponent’s image, stack sizes, the situation and much more.

By definition, ‘representing’ in poker means that you are communicating something false about your hand. Ultimately there are two basic messages that you will communicate:

Each bet and action will tell a story about your hand and it is your job to make that story as believable as possible. There are different tactics you can use in order to tell that story including the size of your bet, what street you bet, the timing of your actions and how much of your stack you are committing to the hand.

Let’s start with ways to represent strength in a poker hand.

Since continuation bets are mentioned in many of our poker lessons, we won’t spend a lot of time on this topic. However, it is important to note that poker players have evolved over the last couple of years and that just because you raised pre-flop does not mean that you will automatically win by betting the flop. Whether you bet or not and how much you bet should be based on several factors including your image, your position, the texture of the flop, stack sizes and your opponent’s tendency to play back at you. While it’s still usually correct to continue to represent strength, it’s more important than ever to tell a believable story with your bets.

The size of your bet is the most important factor in representing the strength of your hand and will also set up future actions depending on how your opponent responds. For example, you raise in the cut-off position and the big blind calls and checks a flop of A79 with two hearts. If you had an Ace, how much would you bet knowing those draws are out there? If you only bet 1/3 of the pot, is it believable that you have an Ace? – probably not. In this case, an Ace would more likely bet between ½ to 2/3 of the pot to give a drawing hand improper odds.

If you continuation bet and get called and then check the turn, you are communicating weakness. What story are you telling about your hand if you give up on the turn? Basically that you missed the flop, made a continuation bet and are hoping your opponent will check behind. Because continuation bets are so common these days, many players will call your flop bet in order to evaluate how you play the turn. But what hand were you representing on the flop? If you really had that hand, would you check the turn? In order to tell a convincing story about your hand, you may also need to bet the turn as well.

Let’s say you bet a relatively dry flop (say J63, no draws) and an Ace hits the turn. This is one of the best times to fire a second barrel. Your opponent may have called the flop with a mid pocket pair in order to evaluate the turn and puts you on a hand like AK or AQ. Now that the Ace hits, there are too many hands that you could have that beat him so it will be very hard for him to continue.

As far as bet sizing goes, assuming you read your opponent for weakness, a bet of around ½ – 2/3 the pot should do the trick. Do not get scared! A big sign of weakness is a turn bet that is the same size as your flop bet. If the pot was 2000 on the flop and you bet 1200, after your opponent calls the pot would be 4400. If you now bet 1,200 again, not only is your bet not consistent with the story you are telling, you are now giving your opponent great odds to see a river card. Since your goal is to get your opponent to fold, bet a size that will maximize the likelihood of getting your opponent to fold.

One way to do this is simply re-raise pre-flop when in position. Re-raising pre-flop from the button or cut-off position shows much more strength than a standard re-raise from the blinds. If you do get called pre-flop, you are very likely to get checked to on the flop and you can take the pot down with a continuation bet.

Another situation where you can use position to represent strength post-flop is when you are on the left of a player who habitually raises from late position and continuation bets 100% of the time. While one option is to re-raise him pre-flop, it is sometimes better to call pre-flop in order to control the size of the pot and outplay him on the flop. By calling his raise, you are automatically announcing that you have a hand – most likely a medium strength hand since you did not re-raise pre-flop. Since your opponent is continuation betting 100% of the time, and he will miss the flop 2/3 of the time, you can often times take down the pot with a 2.5x – 3.5x raise. On a ragged board, you are representing an overpair and on a board with face cards, you would be representing at least top pair.

Continuing with the same example of playing an opponent who usually continuation bets, another option is to call the flop bet in order to take the pot down on the turn. In order for this play to work, you must use your past tendencies and the texture of the flop in order to tell a believable story about your hand.

One of the most believable and effective turn bluffs is to call a flop bet with a flush draw showing. Let’s say you call a raise on the button and your opponent bets a flop of Q93 with two hearts. By calling the flop, you could have a wide variety of hands that will cause your opponent to proceed with caution. Because you called the raise pre-flop, you could have KQ, QJ, QT, 77-TT or a flush draw. If the turn brings a third heart, it will likely slow your opponent down allowing you bet and take the pot down representing the flush. Because of the added possibility of you having top pair, your opponent will be forced to fold anything other than a big hand.

This is one of the best plays to use against aggressive opponents. Because continuation bets are so common, many players assume you are going to bet the flop if you raised pre-flop. If you connect big with the flop such as two-pair, a set or sometimes even top-pair, make a slightly weaker than normal continuation bet in order to induce your opponent to raise. Example: On a board of KXX with a pot of 450, a good bet size here is around 200. It’s small enough where it appears weak and gives your opponent the illusion of having fold equity. This is often very profitable when your opponent’s only move is all-in and they think that shoving their stack in will cause you to fold.

Similar to representing a continuation bet, you can get lots of chips from aggressive opponents by betting weakly into a pre-flop raiser. You don’t want to bet so weak where you actually look strong, but you want to bet an amount that makes your opponent think you are trying to define your hand. This is often around ½ the size of the pot. For example, if you have a set of 5s on a flop of KQ5 with a pot of 900, bet around 350. You will be representing a hand like QJ, QT, KT or even JT and your small bet will cause an aggressive opponent to come over the top of you.

As you take your game to the highest of levels, you are going to be representing something almost every pot you are involved with. In order to outplay your opponents, you have to constantly think one level deeper than they are. Whether your goal is to get them to fold, get them to call or get them to raise; you will be using multiple factors in order to represent a particular hand. In every hand you play from now on, always be conscious of what your opponents think you have and then use that to win as many chips as possible. 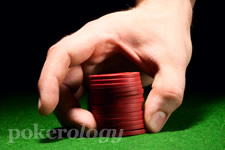 Each bet and action will tell a story about your hand and it is your job to make that story as believable as possible.