Stud high-low split pot is a form of seven-card stud. It is often referred to as stud high-low, stud eight or better, or stud/8. The key difference between this game and straight seven-card stud is that the highest hand and lowest hand split the pot. The eight or better simply means that the low hand needs five unpaired cards, with no card higher than an eight, in order to qualify for the low part of the pot. If there is no qualified low hand, the highest hand takes the entire pot.

The betting structure of stud/8 is identical to straight seven-card stud. In this lesson we’re just going focus on the differences between the two forms of the game, so it’s assumed that you’re familiar with the rules of seven-card stud and know the all important poker hand rankings. Please refer to these rules if you’re unsure.

An interesting difference that separates straight seven card stud from its split pot cousin is that most of the chips go into the pot on the later rounds in split pot, while in straight stud the chips go in early with players trying to thin the field. In the early rounds of betting all low hands are betting on the come, as the earliest you can make a qualifying hand is on fifth street.

The high hand in stud/8 is the identical to a winning hand in straight seven card stud. There is always a high hand, which will be awarded half the pot. If there is no qualified low hand then the high hand will scoop the pot.

The rules for a qualifying low hand are as follows:

Low hands are ranked ‘top down’, from the highest card in the hand. For example

In case it is not obvious, the best possible low hand is A-2-3-4-5, known as a ‘wheel’. A straight flush wheel is a monster to scoop the entire pot. Yes, there could be a higher straight flush to capture high but that would be very unlikely.

Here are two stud/8 hands at a showdown. Let’s see who wins.

Low hand: does not have a low

This example would be a split pot. Hand A takes the high hand with a pair of tens and hand B wins the low hand. Hand A did not have a qualifying low hand.

Always assess the cards your opponents are showing. With a little practice it can become fairly obvious what kind of hands all of your opponents hold or which way they are drawing. Also, just as in straight seven card stud, keeping track of live cards is critical. In split pot games tracking the low cards is very important, not only relative to their impact on your hand, but assessing the low draws of your opponent’s hands.

Here is a caution to working toward a low hand – it may be counterfeited which would cause you to be quartered. What does that mean? It means that at the showdown if one player with the best high hand takes half the pot, and you have the same hand as another low player, the two of you split the other half which is only a quarter of the entire pot. This is not an occurrence in which you wish to participate.

The main objective in stud/8 is to scoop the entire pot – and one way hands go way down in value. A key point to remember with stud/8 is that you should not play marginal one way hands. If your hand can only win half the pot, make sure it is the favourite. This means chasing a low which has an eight or a high pair which, by the board, is already second place is silly.

Fifth Street is a key moment in stud/8, because it’s the earliest you can make a qualifying low hand. This is why you’ll find that most of the chips go into the pot on the later rounds in stud/8, while in straight stud the chips go in early with players trying to thin the field. In the early rounds of betting in stud/8, all low hands are betting on the come.

Stud/8 is not an easy game to master, but it is well worth putting in the effort to play this game well. 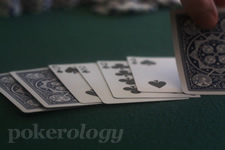 Fifth Street is a key moment in stud/8, because it’s the earliest you can make a qualifying low hand.