Texas hold’em is a game of information availability – and when you go through a hold’em hand, regardless of whether it’s fixed-limit, pot-limit or no-limit hold’em, you need to be able to read the board and understand what it’s telling you. This is critically important.

The first step is to evaluate the composition of the board. This means working out what hand you hold based on your two hole cards and those on the board. But it’s also important that you connect the dots and have an awareness of what the best possible hand (the nuts) might be. Knowing what the nuts is on any given board is second nature to seasoned poker players, but it’s not always so obvious to beginners. Hopefully by the end of this lesson it will be.

The flop is a defining moment in hold’em and can be made up of many different card combinations. Here are a few examples of common flop textures you will see when playing hold’em:

A rainbow flop means all three cards are of different suits. A rainbow flop means nobody can hold a flush without drawing on both the turn and the river, as the maximum number of suited cards a player could have at this point is three (two in the hole plus one on the board). If the turn is a card of the fourth suit, then a flush defintely won’t be possible.

This flop has two cards of the same suit (spades), which means the maximum number of suited cards a player could have at this point is four. If a player has four suited cards then he’s said to be “on a flush draw”, and could have two opportunities for hitting a flush – on the turn or on the river.

If the flop contains three suited cards then someone could already have a made flush, with the two cards in their hand. These types of flops are very dangerous if you have hit part of it, but not the flush. Your hand is also under threat by players who might have just one spade in their hand and are drawing to a flush.

Whenever the board shows a pair, the possible hands available increases to include full houses and four of a kinds. Therefore you should immediately realize that your opponent’s could be holding these big hands.

In order to be properly prepared for playing poker it’s essential that you can read the board and work out your best possible hand. It’s easy to do, yet even experienced players make mistakes and mis-read boards from time to time.

The best hand you can make here would

for a full house.

In this example you’re best hand is

for a King-high flush.

In this example your best hand is

for a straight. You could use one of the 4’s in your hand but it doesn’t make any difference because you’re effectively “playing the board”.

The term “the nuts” means you have an unbeatable hand based on the board. When playing poker you should always think about what your opponents might have, so it’s important that you can read the board to work out what the nuts might be.

See if you can work out which starting hands would give the nuts in the following examples:

This board doesn’t contain any pairs and only two suited cards. The best possible hand would be a straight, for anyone holding 10-7 (suited or unsuited). It would give a straight of 6789T. What would be the second best hole cards? That would be 7-5, giving a lower straight of 56789.

The nuts on this board would be four of a kind since the board is paired. Anyone holding

would have quads. What would be the second nut hand? Well since there are also a pair of 6’s on the board, anyone holding

would have the second nuts.

The board isn’t paired and there are only two suited cards, so we can discount a flush or better. A straight is also impossible since there are too many gaps to fill. The best hand here would be pocket Kings, giving a set. The second best would be pocket Jacks, for a lower set.

Understanding the Strength of Your Hand

Sometimes the board can render those two private cards that you’ve been dealt as absolutely priceless, or absolutely worthless, or somewhere in-between. You must learn to read the board and fully understand the relative strength of your hand and what potential opportunities or dangers lay ahead.

Let’s revisit the example hands we used earlier and determine how strong your hand really is.

. Therefore you have the fourth best hand based on this board.

You are “playing the board” which shows a straight. But you would lose to any players holding a single 8 for the higher straight. Any player with an 8 would be in very big trouble if someone else had 8-9 in the hole for the nut straight.

From Nuts to Nowhere!

What’s your hand at this point? Well, you have flopped the nuts with an Ace high straight. If you were to perform a SWOT analysis at this stage it would be very healthy. The only slight danger is the potential flush draw. Let’s imagine you bet and get called, and the turn brings:

You no longer have the nuts because the board is now paired. Let’s imagine you still believe you’re winning and you get to see the river card:

This is a terrible river card. Not only does the river bring another club, meaning a possible flush, it also double pairs the board. You’re now losing if any of your opponents have just a single Queen or Jack, or two clubs. You’d also be losing if someone held TT, let alone a pair of Jacks or Queens for quads.

Even experienced poker players make mistakes from time to time. As a beginner to poker you might mis-read the board every now and again – but it’s natural to make mistakes when you’re learning new skills. Just be aware of the texture of the flop at all times and use the information available to you – and use it wisely. 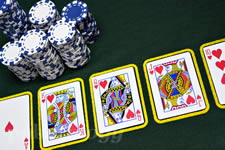 The board can render those two private cards that you’ve been dealt as absolutely priceless, absolutely worthless, or somewhere in-between.