Poker is a game based on information availability. We don’t ever know for sure how good or bad another player’s hand is, often until it’s too late. But because poker is a game of human interaction, we sometimes receive clues from other players, based on changes in their betting patterns or their physical demeanour, which indicates the strength or weakness of their hand. These are called “poker tells”.

A player gains an advantage if he observes and understands the meaning of another player’s tell, particularly if the poker tell is unconscious and reliable. Sometimes a player may even fake a tell, hoping to induce his opponents to make poor judgments in response to the false poker tell. After all, poker is a game of deception.

The Two Forms of Poker Tells

Betting patterns are the most dependable poker tells. By studying the way a player bets both past and present, you will have more information and be better able to judge whether to check or bet. Betting patterns will remain your main tells.

Physical tells, many of which are dramatized in movies and television, are the most fun and will be the focus of this lesson.
Obviously these are only applicable to live poker, where they can help a player win some crucial pots over a lifetime. Unless you are a savant, learning and analyzing a cluster of tells does take some work.

What makes tells hard to implement is the way they vary from player to player. For example, a player may throw his chips into the pot with force, and then leave his hands out near the action. For most players this means a big hand, for other players, it is a bluff. Some poker tells are false, many are contradictory, and some are just downright unreliable. There is no magic to it.

As you make observation a habit, you will learn to sift through these multiple tells and notice that the first tell is very often genuine, and the shortest tell is the most reliable. Most long, drawn out tells are false, set up to confuse. We have all seen a Hollywood tell as someone makes a screwed up face of displeasure and then bets! The general rule is that weakness usually means strength, and strength usually means weakness. But, you must decide how much weight to give a tell at any given moment. If you make learning tells fun, it will be an ever-changing, exciting part of your poker arsenal.

There are many types of poker tells. The lists that follow in this lesson should only be used as a general guide. The reliability of each varies, and guessing the reliability of each poker tell is an art form. Many tells mean strong with one player and weak with another, it is up to you to tell the difference by being observant.

Poker tells before the cards are in the air

Poker tells that may indicate a strong hand

Remember, some of these poker tells are more reliable than others. While most poker experts suggest you watch your opponent’s eyes, I suggest looking at his hands. That trembling hand syndrome is usually the sign of a good hand, and it’s the kind of tell that can’t easily be controlled either, so it’s generally reliable.

Poker tells that may indicate a weak hand

That’s quite a list. Pick a few and see if you can spot any tells next time you play live poker. Now let’s look at some of the fundamentals to successfully spotting tells and other factors you need to consider.

It’s important to recognize that beginners will not go to great lengths to confuse you with reverse tells. Don’t read too much into their bet timing or the body language they are giving off. If you are going to look for tells, just know that the most obvious ones are going to be the most accurate.

Since you can’t physically see your opponents when playing online, the physical tells we’ve mentioned are clearly not going to apply. Remember though, that betting patterns are the most reliable of all poker tells. Look out for changes in a player’s betting pattern and observe their timing. A large amount of time before calling can sometimes mean a weak hand, and a fast call usually means a drawing hand. However, timing tells aren’t always reliable, since for all you know the online player is also reading a book, watching TV, or rushing back from the bathroom.

Practice is the Key

Looking for poker tells does not come naturally for most of us. But, after a while you will observe the flow and motion of the table, sifting through countless confusing bits of information, calculating whether to check or bet, all the while relaxing, having fun, talking, ordering drinks, and doing some cheap chip tricks. Once you learn to read the cards (mathematical odds and technical aspect) what is left? Reading people!

You can’t study everyone and everything at once. So focus attention on individual players during your poker session, and never fail to watch a showdown while replaying what you observed during the hand and correlate it with the hands the combatants turn up. The very best time to study your opponents is when they’re involved in a hand and you’re not.

Practice is the key to reading any tell. Whether you are a trained observer in poker or a trained criminal scene investigator (CSI), the key word is trained. Learning the poker tells listed above all at one time is difficult. It is more fun to learn a couple every time you play. For an example, one night at your casino, home or bar game pick a player and watch his energy levels. While he won’t go from nearly comatose to sitting bolt upright in his seat, most players do shuffle around in their chair and sit upright when they have a good hand – or at least a hand they intend to play. Watch everyone’s posture all night and it will become a habit and you will ‘train’ yourself to be observant at the table.

Another way to train yourself is to observe just one or two players for the first 10 minutes and then gradually add other players to the mix. Start with the player closest to you, because they are the ones that affect your play the most. For instance, can you tell if the players to your left are going to fold or raise? Can you tell if the opponents on your immediate right are calling with a big hand or just want to see a cheap flop? Here’s a tip – players with cards cocked in their hand who look like they’re ready to pitch them to the dealer when it’s their turn to act usually do just that. It’s not a universal poker tell, but it’s accurate more often than not.

You do not want to give off tells, so watch yourself. Do you lean toward the action when you have a good hand? Try this – when you have a marginal hand (such as JT on the button) sit up in your chair, be obvious, squirm around a little, raise the pot, and look at the other players. Notice who looks at you. You just gave them a false tell. They think you have a big hand. Bet the flop and watch them fold. Note which players are not sophisticated enough to notice your Academy Award performance, and be aware of the players that do not ’seem’ to notice but are thinking, was that for real, and who is this hot dog.

Don’t Overestimate the Importance of Tells

Some poker players spend way too much time searching for unconscious poker tells and greatly overestimate there importance. Every poker player knows that they are supposed to hide their emotions and disguise their true intentions. Even people who don’t play poker know this. Sure, some players will exhibit obvious physical tells from time to time, but the conscious things that poker players do at the table are of far greater significance.

Focus on the bigger picture first and categorize your opponents. Are they tight-aggressive? Are they loose-passive? How tricky are they? Putting players into broad categories that define their playing style and tendencies will help you far more than concentrating on the small and unconscious things.

Physical poker tells are nowhere near as important as studying betting patterns and playing styles. Once you have mastered these then, and only then should you look for the classic poker tells that many players exhibit. But tells are fun, and very few players concentrate on this part of the game – so you will have an advantage. Granted, poker tells will not make you money on every hand or every hour, but over time, they will add to your profitability. In any business, if you could increase profits you’d be very happy.

David lives in Atlanta, Georgia, and has played over a million hands online and many thousands of hands in Mississippi, Louisiana, Florida, Illinois, Indiana, and Las Vegas casinos. 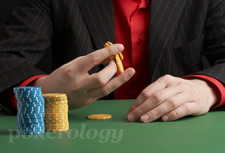 Some poker tells are false, many are contradictory, and some are just downright unreliable.