Poker is not just a card game, but a game of people played with cards. As you progress through the stages towards poker expertise, you will experience moments when you realize how powerful this statement is. In this lesson we’ll be looking at some of the basic poker playing styles that exist and how to spot them. Whether you’re playing online or playing live, when you observe the types of decisions your opponents make you can really pick up on their tendencies, psychologically and emotionally – that can help you determine how best to play against them.

Poker is a game of observation. Therefore the first step to defining a player’s playing style is to observe their general tendencies. This factor is the central core of poker success. Learning your opponents’ proclivities is a must if you intend to become a winning player. Every action an opponent takes means something. Why from that position did player x raise or just call? It cannot be stressed enough to pay attention, especially when not in a hand (which should be the majority of the time) to learn how your opponents think and act.

Each poker player can be broken down into two primary factors which will broadly define their playing style. They are as follows: tight vs. loose and passive vs. aggressive.

Being tight or loose doesn’t necessarily refer to how somebody plays their hand, but merely the selection of hands that they play. They’re either going to play a tight range of hands or a loose range of hands. How they play those hands – whether it is passive or aggressive – is going to dictate how you play against them.

A players passiveness or aggressiveness is displayed in their risk tolerance.

By observing your opponents you’ll be able to categorize them based on what you see. Each poker player you encounter will have some degree in which these factors make up their personality but you have to start somewhere. The first step is to determine whether they are tight or loose. If an opponent folds most of their hands then mark them as tight. If they tend to play a lot of hands, mark them as loose. The next factor to determine is whether they are passive or aggressive. Do they call and check more often than they raise and bet? If so, mark them down as passive. If they bet and raise a lot you can mark them down as aggressive.

By assessing these factors you will typically see four general playing style combinations:

Knowing these broad characteristics will help you to figure out what a player has based on his betting action in a particular hand. If a loose-aggressive player is betting and raising you are less likely to credit him with a strong hand than if a tight-passive player raises or re-raises, since it’s something they don’t usually do.

A typical tight-passive player generally doesn’t play many pots and will often just call pre-flop when they find a hand they like. They will play so tight that when they do play, everyone else folds. So, when they have a good hand they can’t make any money. This type of player is sometimes labelled as a ‘rock’ or a ‘nit’ and the general style of play can also be referred to as ‘weak-passive’. They are easy to bluff and will frequently fold to scary board cards, such as an Ace. The really timid players can also be paralyzed with fear and won’t take shots. This is because they tend to play with a fear of losing. Observant players who have identified a weak, predictable player will always be on the lookout for situations that can be exploited simply because the tight-passive player folds too frequently to aggression.

Loose-passive players like to limp into lots of pots. They will call raises “just to see a flop” and will remain in the hand whenever they hit any of it, however marginal. They seldom take chances or become aggressive in their plays and they tend to be “calling stations” when they do. Their whole approach to playing poker is to watch and let others do the risking. Many beginners or even players who’ve played for a long time can fall into the trap of just calling, calling and calling. This is especially true in low buy-in games. They are very obvious to spot and are easy targets. Unlike the tight-passive players, you’re not going to be able to bluff them – you never want to bluff a calling station! But when you do pick up a hand that is fairly strong, you should bet for value and milk as much out of them as you possibly can.

The loose-aggressive player tends to raise or re-raise a wide variety of hands pre-flop and will often bet on most flops. They can be extremely difficult to read because they play such a wide range of hands. In no-limit hold’em there are some very skilled players who employ a loose-aggressive style of play to great effect. They use their chips as weapons and are constantly applying pressure on their opponents. They will bluff a high percentage of the time and are hard to play against. However, at the extreme end of the loose-aggressive scale is the ‘maniac’ who seemingly raises without rhyme or reason. The maniac’s tendency to overplay his hands means you will almost surely show a profit in the long run against this type of player.

Be aware that nobody fits into very neat or specific groups. Once you’ve put players into an initial category you’re ready for the next step – which is to determine whether or not they are tricky. This is not always easy because poker players tend to fall on a continuum that ranges between extremely tricky and completely straightforward. However, it’s an important step because once you put them somewhere on the scale you can begin to intepret their actions with greater accuracy. For example, let’s suppose a tight-aggressive player raises pre-flop from early position. If he is a straightforward tight-aggressive then you can credit him with a strong hand, such as a premium pair. If you’ve determined that he’s a very tricky player then he might also be mixing it up by raising with two big cards or a suited Ace.

The key to all of this is observation. You really need to observe the players at your table and pick up on their tendencies and understand what type of plays and decisions they make based on their personality types. If you can, start to classify them into some of the groups we’ve discussed. It then makes your decisions a lot easier and more profitable.

The Importance of Aggression

Remember that poker is a game of aggression and this is especially true of hold’em. If you don’t want to be aggressive, then you shouldn’t play — or at least you shouldn’t expect to win. Poker is all about conflict and it’s not a game for the weak. This is why an aggressive style of play is critical to success. This is a central truth of the game that we all deal with every time we sit down to play. We’re trying to beat the other player and take their money. As the late great Jack Straus once said “I’d even bust my own grandmother if she played poker with me.”

There are obviously times when it’s good to be deceptive and just call pre-flop with a premium hand or check-call a strong hand after the flop. Even aggressive players do this on occasion, but the big difference is they’re mixing up their game – unlike the tight-passive player who only calls when they should probably raise, due to a fear of losing. As the old poker saying goes, “Scared money never wins“.

The biggest downside to a passive style of play is that it only offers one way to win the pot – when you have the best hand. An aggressive style of play gives you two ways to win – when you have the best hand and when you force your opponent to fold the best hand, thereby abdicating the pot to you. For example, if you were aggressive pre-flop, depending on what cards are on the flop, you can continue your aggression by betting and often winning the hand even if you miss completely.

Which is the Best Playing Style?

We’ve already discussed the importance of aggression and why it’s almost always best to be aggressive. A good solid strategy of tight and aggressive play is generally rewarded with a profit. There are some experienced players who have great success by adopting a loose-aggressive style of poker. However, for the majority of players a tight-aggressive approach is usually the most profitable. This style of play is also undoubtably the best way for beginners to start out playing poker since it teaches good habits such as patience and discipline. The tight-aggressive approach also works well as a “default position” and players often build a strong skills base by starting out with such a playing style.

Ultimately though, you should choose a style of play that is the most profitable for you and that suits your personality. In fact, your style of play at the poker table is often shaped by your personality away from the table. Some people can play very differently to their actual personality, but most will revert to type. For example, there are some players who we could label as ‘loose-aggressive/passives’ – these players will raise a lot of hands pre-flop but will often give up on the flop or turn. Typically these are former tight-aggressives or tight-passives trying to experiment with looser play but are not comfortable committing to their aggression – because it’s against their nature. So the best advice we can give is to find what works for you by playing poker and gaining experience on the felt.

It’s also important to point out that the best poker players adjust their style to the players at the table and the conditions of the game. It’s often said that if you’re playing on a table full of tight players then you should loosen up, whereas if you’re playing on a table full of aggressive players then playing a tight game and catching them in the act is an effective strategy. Always be observant of the players at your table and the conditions and adapt your style of play when necessary. It’s what good poker players do. 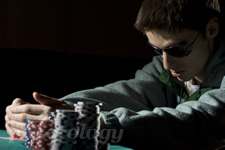 Being tight or loose doesn’t necessarily refer to how somebody plays their hand, but merely the selection of hands that they play.