In this lesson we’re going to focus our attention on how to play against tight poker players. Being tight or loose doesn’t necessarily refer to how somebody plays their hand, but merely the selection of hands that they play. Tight poker players tend to be very selective with the starting hands they choose to play and unless they have learned how to change gears, these players are often predictable to play against. But ultimately it’s their level of aggression that is going to dictate how you play against them.

In our earlier lesson on poker playing styles we discussed the two main types of tight players you will encounter, which were:

We’re not going to focus on the tight-aggressive players in this lesson, since you should generally stay out of their way unless you have a strong hand. They are capable of being bluffed, but it is infrequent enough where trying to look them up isn’t profitable.

Instead, we’re going to focus on the tight-passive players, who are much easier to play against.

Tight-passive players don’t play many pots and will often just call pre-flop. If they do raise pre-flop, they often check it down if they missed with over cards, such as when they’re holding a hand like Ace-King. They will often raise the minimum with marginal hands for fear of losing chips if they get beat and will frequently fold to scare cards. Above all, they play with a fear of losing and will only stay in a pot if they have a strong hand.

Let’s examine some strategies for those times when you’re involved in a hand with a tight-passive player.

If They’ve Not Been Aggressive, Then Bluff

You can bluff them at will – because weak-passive players are the easiest players to bluff. As mentioned, they play with a fear of losing. If they limp pre-flop, or even when they bet a small amount, you can raise with a wide variety of hands.

If there’s an Ace on the board then you can bet it, and they’ll fold if they haven’t made a hand. Likewise, you can bet scary boards like made flushes – and you can also use scary bet sizes that represent monsters – this could be overly small or big bets. Of course, it will depend on the individual tendencies of your particular opponent.

Call and Outplay them on the Flop

You can even call raises from weak-passive players when you are in the blinds, and subsequently bet at the flop. Let’s take a look at an example hand to illustrate.

Your opponent sitting four seats to your right hasn’t played many pots, but in the ones he has played he has usually folded to a bet. In two others he raised pre-flop and when someone did call them, he checked all streets when he didn’t pair his AK and AQ. Your table image is pretty solid and there is no reason for him to think you are playing overly aggressive.

It folds to your opponent in the cut-off seat who raises to 600. Since you know he is a tight player, he likely raising with a narrow range of hands here. The button and small blind fold and you are in the big blind with XX (XX = any two cards). Should you play this pot?

On the surface, it might look like the answer is an obvious no. Why would you want to get into a pot with someone who is only playing premium cards? But let’s look at the hand again. It folds to a player who has been tight, but has also played passively. We can use his passive tendencies as an opportunity to bluff him out of the pot. Just because he’s raising doesn’t mean he has AA or KK. He is in late position, so his range of raising hands probably includes AT – AK, KQ (maybe KJ) and pocket pairs from 66 – AA.

So if you are going to play this pot, should you re-raise or call? Re-raising is certainly an option since we would be representing a big hand, but we don’t really have enough chips to make that play without committing ourselves on the flop and we aren’t short enough to push all-in pre-flop without it being an overbet (meaning it is high risk for little reward – we are risking our whole stack to win 900 chips). It’s best to play small ball, risk less chips and look to outplay them on the flop. In this situation, calling is also better because we know he likes his hand now, but he plays the flop passively and that will give us the best opportunity to take the pot away.

. After your call there is 1,300 in the pot and our opponent has 3,900 left. Against this type of player, that Ace represents a good opportunity to bluff:

Since our image is tight it is going be easy for us to represent having an Ace and we should know if he has an Ace or not depending on how he plays the flop. I would bet about 800-1,000 chips. Not only does that introduce doubt in our opponent’s mind, it is also a tough bet for him to call because it represents about 25% of his stack. He can’t stand another bet on the turn and he would have to commit most of his stack to raise you here, forcing him to take a huge risk for all his chips.

If we were playing a more aggressive player I wouldn’t suggest a “probe bet” like this. It can look weak like we are trying to see where we stand and an aggressive player will often raise on a bluff here. But against a tight/passive player it would be really hard for them to make a play unless they did have a strong Ace like AQ or AK. You bet 900 and your opponent folds showing

Our example hand is just one method of how you can take advantage of a tight-passive player – and although it was a tournament example, the same strategy can be used in a cash game to good effect. Remember that timid players are often paralyzed with fear and won’t take shots because they tend to play with a fear of losing. If you’re an observant player, which you should be, then be on the lookout for these weak, predictable players. And when you find them – lookout for the situations within the game that can be exploited.

Let’s finish with a note of caution about all these poker strategies – and that is to stay out of their way if they show strength in hand. If they are betting or raising strongly then you should steer well clear unless you have a very strong hand yourself. Also, while you should be bluffing more often against these types of players, make sure that you are mixing up your game enough so that your aggression does not become predictable. 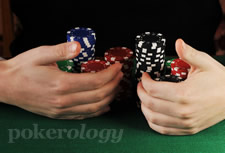 Weak-passive players are often paralyzed with fear and won’t take shots because they tend to play with a fear of losing.