In its most rudimentary form the main difference between the two is that implied odds drive no-limit and in limit making or saving an extra big bet is what separates good players from their mediocre brethren. One might make the analogy of the first game being similar to a roller coaster and the second a carrousel. While some enjoy the thrill of speed, others prefer the comfort of the merry-go-round.

For those who have never really embraced limit play and look down upon it, rest assured that there are many pros that make six figure incomes playing limit hold’em without the roller coaster thrashing to their bankrolls that can accompany no-limit play.

While many unsuited big card starting hands are regularly and correctly played in limit, those same hands can get a player into a heap of trouble in no-limit. Hands such as AQ or KQ can be played aggressively in limit but they can be a disaster in the making in no-limit, especially if the stacks are deep.

This difference is obvious but worth noting. Many poker players who play both games will, on occasion, complain at the tables while playing limit that they cannot protect their hands due to the structured betting. Of course these same players, when turning over a losing hand, do not praise the game for allowing them not to have lost their entire stack.

There still are times when a bet and/or a raise can impact the odds offered opponents in limit and accomplished players are always aware of this dynamic.

Certainly the knowledge and proper use of odds has a place in both limit and no-limit play. Due to the heightened emphasis on implied odds, no-limit players can many times continue a hand with the worst of it and ultimately prevail and profit handsomely. In limit play, pot odds take on a much more critical role and relying too heavily on implied odds to justify chasing a draw becomes a major downfall of certain players.

Limit is a more mechanical and structured game and adhering to the odds is a must to succeed.

Players need to understand that while one can bet as much as he likes in no-limit, the size of his bets give away information to his opponents as to the strength of his holding. It is for this reason many no-limit players like to keep their bet sizing constant, to avoid giving too much information away. Of course when they play like this – they are playing like limit players. Ironic, don’t you think?

In no-limit one attempts to manipulate the pot odds to make it ‘incorrect’ for opponents to proceed with draws. Limit players need to focus to the times when being aggressive in an attempt to ‘thin the field’ will work and when knowing all reasonable hands will call your bet anyway. Then your bet/raise will only build a pot that will make it correct for opponents to play.

In limit play pot odds are critical, as implied odds do not take on the emphasis they do in no-limit. Players that fail to make adjustments based upon both the odds they are receiving as well as the odds their opponents are being offered by the pot will not fare well in limit play.

While many believe that bluffing in limit play is a fool’s errand, there is no question that a well timed bluff can work. While bluffs have a much better chance of success in no-limit play, you need to understand that the cost of failure in no-limit can be much higher.

Over the years limit gurus, such as David Sklansky, have advocated that in limit play losing a bet on the end is okay but losing the pot is a disaster. This dictum has led a legion of players to lose a lot of bets on the end and has lost favor in the current limit thinking. Today’s accomplished limit players are not as quick to pay off on the river fearing being bluffed out. This, of course, would indicate that there may well be more opportunities for river bluffs in today’s limit hold’em.

Just know your players, understand the image you have been projecting, assess the board and put yourself in their shoes to evaluate if your bluff is believable.

The size of your stack and also your opponents’ has a much greater importance in no-limit versus limit play. Playing with or against a deep stack in no-limit can make significant differences to your strategy. The threat that is evident by the amount of money behind a bet is much larger in no-limit. However it still exists in limit play. In addition, the amount of money a player has on the table also helps create an intimidating presence which can help create positive results in either form of the game.

There should be consensus that the single most popular goal of playing poker is to accumulate more chips than you started with. However, in no-limit players are constantly on the lookout for opportunities to double up or take an opponent’s entire stack. In limit play, the accepted guideline for middle limits is to earn one big bet an hour over time. Individual sessions can spike wildly in either direction but a winning player, whether a dedicated amateur or professional, who keeps accurate records will be able to chart this one big bet an hour earn rate.

While the two games look very much the same on the surface they are very different. This will become even more apparent as your progress through our lessons on limit hold’em.

Many players tend to play just one of the hold’em variations, usually being the one they initially learned. There are many others that feel comfortable playing either format. There are then those that can excel at both formats and they are forces to be reckoned with. You should strive to be in this third class of players because they are truly poker players. This third group usually feels right at home with other poker variations such as stud, Omaha, razz and all the different formats. They are truly poker players not just hold’em players. 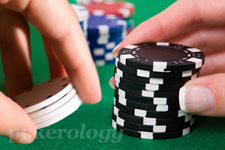 While some enjoy the thrill of speed, others prefer the comfort of the merry-go-round.