In this lesson we will direct our focus to strategies for the turn. If you have reached a turn decision then you haven’t folded pre-flop or on the flop and now the bets double so there is still time to get away from a marginal hand without too much damage to your stack. With 86% of your final hand realized and the bets doubling, you should fold frequently on the turn.

You may well opine that my approach to limit hold’em appears to be very tight and that would be an accurate assessment. A tight/aggressive approach to this game will pay the dividends while a weak/tight approach would be analogous to bankroll suicide. Taking a hand too far without the correct price in limit hold’em is a formula for losing. Let’s move on to what many believe to be the most difficult street to play, the turn.

The reason why the turn is so critical is that the stakes are doubled and more often than not if you don’t fold on the turn you will be calling on the river thereby committing to a least two double bets. One exception would be holding a busted straight or flush that does not warrant a bluff on the end. Having reached the turn you will be holding one of the following type hands.

You either know you have the best hand because you are holding the current nuts or you believe you hold the best hand because you’re holding Aces, for example, and the board is not coordinated nor does it appear to have helped anyone else. If you hold the nuts in position then you should be betting or raising. Straight forward play is the default action of solid limit players. With a few exceptions such as holding quads, you should not succumb to what Mike Caro has dubbed FPS – Fancy Play Syndrome. If, however, you hold the nuts not in position, then you have a more complex decision to make. You need to assess just how strong your hand is and if someone else will venture a bet if you check. The most annoying bad result of trying to be tricky is checking with the intention of check-raising only to have everyone check behind you. The icing on that cake is when a free card winds up beating you when that player may have folded to your bet. When holding what you believe is the best hand and are unsure of exactly what to do… bet!

As emphasized earlier, winning limit hold’em is driven by the math. If you’re on a draw know your outs and odds, including implied odds to determine if it is correct to proceed. Bucking the odds by continuing in a hand without the right price is a major leak committed by less experienced players who are flying by the seat of their pants. Remember, there is no shame in folding. The game does not reward the number of pots won at the end of a session but rather the number of chips accumulated. When counting your outs, make sure to focus to “clean” outs versus “tainted” outs. Clean outs are not expected to help anyone else. An example of this situation would be drawing to an open ended straight with one card to come and there are two of a suit on the board. It should be obvious that in this case you have six clean outs and two tainted outs. If this is not obvious to you, think about it until it is before proceeding.

In todays limit games it is not unusual for players to take a card off on the flop as it is still a single bet. If you’re in position, especially against a single opponent who checks, fire a double bet at him to take down the pot. If he instead raises, the vast majority of the time expect that he holds the goods and fold.

A Contender with Outs

These hands are tough to play as you’re not quite sure where you stand but fear you are second best. A perfect example would be holding pocket Jacks when an overcard flops. It is in this predicament that many of the factors such as position, number of active players, knowledge of your opponents and understanding your own table image will come into play. There is no question that if you never lay down Jacks when an overcard appears on the board and an opponent keeps betting into you, then you have a big leak in your game. On the other hand, if every time a scare card appears you meekly retire you also have a big leak in your game. There is an old poker expression that states, “There is not a sniper behind every tree”. With that expression in mind, when the other factors favor the play, use that scare card against your opponent(s). Remember if the card looks scary to you, it may well be terrifying to an opponent. If the only time you show courage is when you hold the nuts you will become so predictable as to be exploitable.

You might be thinking how a solid player has arrived at the turn with nothing but junk. That would occur, as one example, when in position and checked to by a single opponent you bluffed at the pot and received a call. Now if a blank falls on the turn and your single opponent checks again, you should normally follow through and bet again. Remember, many opponents will take off a card on the flop but when the bets double they become hesitant to continue unless the turn improved their hand. If you are not prepared to fire the second barrel then you should not have fired the first one. I cannot stress enough the fact that to make informed decisions you need to consider multiple factors. In this last situation, knowledge of your opponent is critical. While this might sound morally wrong, exploiting the weak in poker is the surest way to enhance your bankroll.

The turn in fixed limit is certainly a defining moment as the stakes become doubled so errors in judgment become magnified. Those players who regularly “take off a card” on the flop with modest holdings for a single bet need to come to grips with the doubling stakes on the turn and then again on the river. Solid, experienced opponents know this fact well and use it to their advantage by exerting pressure through bets and raises to make your turn decisions even tougher.

What can be learned from arriving at the turn with a weak, vulnerable holding can be summed up in the axiom of… the first mistake is the worst mistake. If you accept the tight/aggressive formula as the best path for success in limit play, making that first mistake speaks to the tight part of the formula. I’m not suggesting that you never look at a flop with hopes of improving or mucking, just make sure that you have the discipline to muck on the turn when it appears you are running up hill.

A word of caution to this advice of mucking on the turn and that is to not become so predictable as to become exploitable. You need to know how your opponents play to assess whether they are playing you or their cards. On occasion you may need to check-raise an opponent on the turn to send the message that you’re not a weak, passive player who can be manipulated. 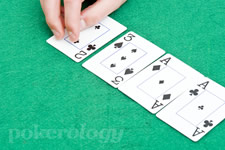 Taking a hand too far without the correct price in limit hold’em is a formula for losing.