The river is possibly the easiest street to play in limit hold’em. There are no more cards to come so there will be no further improvement to anyone’s hand. There are basically three objectives to consider at the river. If you have the best hand, how can you make the most of it? If you don’t have the best hand, how can you lose the least with it or make an opponent fold? If you have a busted draw can you make an opponent with the winning hand lay it down in order to steal the pot? You accomplish these objectives through:

If the single most important aspect of playing winning limit hold’em is folding, then the second most important aspect is value betting. The first aspect saves you money and the second aspect makes you money. Since limit is about making an extra bet or two versus possibly putting your whole stack at risk, it is almost always correct to value bet on the end. This holds true even if you’re not certain that you hold the best hand. The times you lose an extra bet will be more than compensated for by the times you encourage a winning hand to fold thereby taking the entire pot which would have been lost in a showdown. There is a caveat to this strategic consideration and that is… do not attempt to value bet when the only hand that will call will beat you. That would be called a bluff and we’ll get to that in a bit.

As an alternative to value betting, you may wish to induce a bluff in order to win a bet that might have been lost if you attempted to value bet because your opponent will simply fold to your bet. Inducing a bluff occurs when you are out of position with a hand that does have showdown value and you check, inducing your opponent to bet in the hopes of stealing the pot. If your hand’s showdown value does prevail, you have successfully induced and snapped off a bluff. The upside is the gained bet. The potential downside is a missed bet should your check be met with a check from your opponent. As you can see, there is a fine line between these two strategic concepts – value betting and inducing bluffs.

Successfully inducing bluffs requires some knowledge of your opponent to assess whether you are better off checking to hopefully induce him to bluff or just betting out if you expect him to make his “Calling station crying call”. There is also a hidden value to this concept and that is you will be demonstrating to an observant opponent that you do not always value bet hands that have some value. This will make him less willing to attempt to bluff you, which makes him more predictable, which makes him more exploitable. Know your opponent’s tendencies and then train him to be predictable to your actions. It is this type of multi layered thinking that separates the winners from the contributors.

Many players feel that it is near impossible to bluff successfully in limit hold’em because it is only one additional bet to call and generations of players have been taught that losing a single bet is no big deal but losing an entire pot is a disaster. While bluffing in limit is not as sure fire as in big bet poker, there is certainly a place for it and if you never bluff in limit, you are just giving too much away. There are certainly times where you know your hand cannot prevail in a showdown against a single opponent and the only way to win is to bluff. There are several keys to successful bluffing:

Consider this situation – both you and your opponent were on draws, you were betting all the way and the river does not complete any draws. You would expect him to muck his broken draw to a bet while it may well have been the winning hand. When you check it down on the end only to see that “his nothing” is better than “your nothing” will you have wished you had bet. These situations become fairly obvious to experienced players.

Your bluff needs to appear believable. In the previous point, since you were leading on each street, it appears that you have a hand, even if it is only a pair. Desperation bluffs on the end that don’t correlate to the betting sequences are usually destined to fail. You only need to win a small fraction of the time to break even when bluffing. The exact number, of course, depends on the size of the pot. Smaller pots will have greater success when bluffing while huge pots are almost always called down.

An additional advantage occurs when you get caught and lose. You then will need to stop bluffing for that session but can expect to receive greater action on your good hands later. Everyone remembers failed bluffs and then tends to label that player as a bluffer who needs to be called down. If you’re playing solid, tight/aggressive poker, you have just hidden your real style of play behind a failed bluff. It will pay dividends to your more observant opponents who now may believe they can take advantage of their newfound knowledge.

While folding should be your predominate action pre-flop and even on the flop, the river is not the place to make sophisticated laydowns because the pot is usually large enough to warrant a call. That having been said, there are many times that you will be throwing money away to call on the river and many players do just that. They can’t bear the thought of being bluffed out and, as mentioned earlier, they have been conditioned by the poker pundits that losing a bet is okay but losing the pot is horrible. While this may have an element of truth to it, becoming a slave to this theory can cost a lot of chips and you cannot just become a calling station on the river… it adds up too quickly. You need to consider what you know about your opponent, review the betting sequences, put your hand reading skills to good use and understand the price the pot is laying you. If you’re convinced you hold a losing hand then fold. If your opponent then shows you a bluff, do not let it rattle you. The way to do this is to remind yourself that even the best players get bluffed out occasionally, while it never happens to the worst players because they always call.

The river separates itself from other streets because your holding will not change as there are no more cards to come. One of the active players (hopefully you) holds the best hand and will be awarded the pot unless that hand is folded. Even if you’re in doubt about your hand’s strength a single river bet will normally provide the pot odds that are worthy of a call.

Aside from being bluffed or making a bluff yourself on the river, this is the street where an extra bet or two is either made or lost. It is those extra bets that truly comprise the limit player’s earn rate. Saving or making those extra bets comes through the skilled application of the elements we’ve reviewed in this section of value betting, inducing bluffs, bluffing and yes, even folding.

In closing, let me provide two goals for you to embrace in your limit play which will indicate something about both your game selection as well as your character … have as many of your losing hands as possible be bad beats and never complain about them. The first one will indicate you’ve selected the right game and the second that you’re a class act.

Shuffle up and deal! 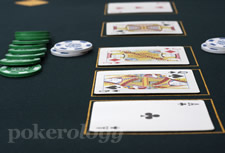 Have as many of your losing hands as possible be bad beats and never complain about them.