Playing before the flop is your first opportunity to voluntarily put money in the pot. Don’t just toss in the first single bet to be a part of the action. Make good decisions by following the advice given in this lesson and stick to our recommended starting hand requirements until you gain more experience. There is no shame in folding and waiting for a better hand to play. On the contrary, the shame is in falling prey to the donkey’s mantra of “any two will do!”

Before we mention starting hand requirements, let’s talk about the mindset that captures successful limit play. That mindset is the ability to be patient and selective about the hands you play. Patience is a critical element to winning hold’em play. Good players exercise the patience to wait for hands that they know have positive expectation and then play them aggressively. In a nutshell this strategy describes the selective, aggressive mantra that has been espoused by Krieger, Sklansky, Malmuth, Caro, and every other credible limit hold’em pundit of the last several decades.

The tight-aggressive approach is the backbone of a successful limit player’s strategy. The reason this approach is so successful is simple—the vast majority of the poker playing public are long term losers who do not have the discipline or knowledge to beat the game. Let your opponents make the mistake of playing too many hands while you become more selective. It will pay dividends. If you only play hands that figure to be the best against opponents who play too many mediocre hands, it just makes sense that you will win money. This critical skill is the foundation upon which other skills need to be added to make you a formidable limit hold’em player.

The most common mistake made by limit hold’em players is that they play too many hands. Look, no one enters a casino or logs on to an online game with the intention of folding hand after hand. But when you look at the entire universe of possible two-card starting hand combinations you might be dealt, the vast majority of them are junk, which means the correct play is to fold most of them. If there’s one tip that will raise your game significantly, it’s this: be selective with the hands you choose to play, and then be aggressive with the hands you do play.

What hands should you play if you’re going to be patient and selective? Well, that depends in large measure upon your position relative to the dealer button. The best starting hands are playable from any position, but other hands have very different characteristics.

We have created a starting hand chart that can be used as a guide. This chart will load as a PDF document (link opens in a new window), which you can view on screen or print off for easy reference.

Understand that our attempt to categorize starting hands by their strength and positional considerations is a loose guide. There are many factors that may encourage you to tighten or loosen your play from these guidelines. As in all poker decisions the phrase, “It depends” comes to mind. That is to say our starting hand chart is a guide, not a set of intractable rules.

In fact, you may want to look at a starting hand chart this way:

But before you decide to deviate from these guidelines, have a reason for taking action that’s at variance from our recommendations.

We haven’t included every possible starting hand on our chart. Unplayable hands, also known as ‘junk’ don’t need any further explanation. I’m sure you will recognize them. In fact, the majority of the hands you’ll be dealt will fall into this category. Let your weak undisciplined opponents play 7-2 because it was suited—you throw them in the muck where they belong.

It’s important to be aware that different games play differently. The texture of the game—whether it’s tight and aggressive, tight and passive, loose and aggressive, loose and passive, or a mixture of these, will dictate what hands you should play. For example, if you’re playing in a loose and passive game, you can limp in from early position with small pocket pairs. If you’re playing in an aggressive game these hands are better off mucked from early position.

There is an old adage in poker relating to how tight or loose the game in which you’re in is being played. The adage advises to play tighter than the table. While this is obviously an over simplification it is generally true. While tight is certainly right, all you need do is play tighter poker than the table. The reason this will work is that through prudent hand selection coupled with your position you will be playing fewer (and generally better) hands than your opponents. However, expect loose games to tighten and tight games to become looser, and be ahead of that curve to ensure you’re in the most profitable zone at all times.

A lot of limit hold’em players will limp in pre-flop rather than raise. If you’re in a passive game and have a hand like J-Ts then you might want to limp because you’re looking to get as many people into the pot with you as possible in anticipation of flopping a big hand like a straight or flush—and making money from a large number of opponents. If you have a pair or high cards that can win without improving, such as A-K, you’re much better off raising and narrowing the field down to heads-up than you are by simply calling and inviting a number of players to enter the pot after you, one of whom might get lucky and steal the pot away from you.

If you call and are then raised, you’re going to call one more bet and see the flop. If it’s raised and re-raised, some players will do the same thing, regardless of the strength of their hand. Imagine entering the pot with the speculative hand of

for a single bet from middle position. Now the player to your left raises, another player re-raises and yet another player makes it four bets, which is normally the cap in fixed limit. Weaker players will normally call as they have already invested a bet and the hand does have lots of potential. Stronger players would recognize the futility of throwing away three extra bets when it is apparent that they are way behind the competition. These distinctions will become clearer and clearer as your experience grows.

If the pot has been raised before it’s your turn, you must tighten up significantly and adjust for the position of the raise. Inexperienced limit hold’em players will frequently cold-call raises with mediocre and potentially dominated hands, such as A-J and K-J. These are costly errors. Be selective and avoid cold-calling raises with hands that have a slim chance to catch the cards they need to enable you to win the pot. Most good players, if they don’t have a very good hand, will simply throw their hand away and wait for a better opportunity. Remember that it takes a much better hand to call a raise than it does to make the initial raise yourself.

Always observe the pre-flop betting action in a limit hold’em game, because it provides valuable information about the strength of your opponent’s holdings. If there’s a bet and a raise and someone cold-calls, my first thought is “here’s a guy with A-Q who is terrified of a big pair and even more terrified of A-K”. He thinks A-Q is a pretty good hand and says to himself… “I’ll call and see what happens with it.” Of course it’s important that you assign a range of hands to your opponents, not just a specific hand. But most players will re-raise before the flop when they hold a premium hand and cold-calling a raise or cold-calling a re-raise is usually a sign of a hand that’s not in first place.

The question or whether to hold’em or fold’em is the first and most important decision you will make. If you’re new to limit hold’em then study our starting hand chart and follow the guidelines given in this lesson. Starting hand selection may differ slightly from pundit to pundit but these are a solid outline for a beginner to embrace. As your experience and knowledge of the game increases your starting requirements will vary based upon how tight or loose your table is, knowledge of the tendencies of players yet to act behind you, any betting that has occurred in front of you, and your current table image.

If you only play hands that figure to be the best against opponents who play too many mediocre hands, it just makes sense that you will win the money. Playing tight requires patience which many or even most recreational players just don’t exhibit. They are in the game to play, not sit to there and fold hand after hand and sit on the sidelines. This is the reason that most poker players are long term losers—they play too many hands. Sure they can get lucky playing junk on occasion and that is what keeps them coming back but their lack of patience and discipline is their financial undoing. If you truly seek success you must have the discipline to be patient. 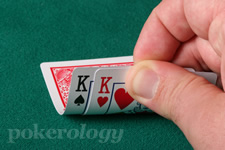