The Levels of Thinking in Poker

Most beginning poker players consider their cards first. After all, it doesn’t take long to realize that starting with a big pocket pair such as Aces or Kings – or even big connected cards such as A-K or K-Q – is a lot better than being dealt absolutely horrid hands like 7-2 unsuited, 9-6, and so on.

Then there are other poker players, who may not appear to be much different at first glance, that are likely to be playing very differently, especially if they are skilled players. While beginners are considering their own cards and not much else, skilful poker players are thinking on at least two and probably three levels. It’s impossible to succeed at hold’em poker if you don’t.

A beginning player will be looking at the cards he’s been dealt and say to himself, “A pair of Aces … sweet,” but more than likely it’ll be something like, “I’ve been dealt

… another essentially worthless hand. I’ll have to toss it away.” That’s an example of playing a card-dependent strategy. This is what most beginning players do – they raise with big hands and fold the weak ones, but there’s more to consider before making a decision.

The Different Levels of Thinking

In order to get beyond the cards you need to be thinking about your opponents and the situation you’re presented with. Here are the basic levels of thinking:

Theoretically we could keep going to deeper levels of thinking, but you’re only going to find a very limited percentage of players who are capable of thinking this deeply – and if they are, they’re probably over thinking the situation anyway.

While getting to deeper and deeper levels of thinking does mark a more mature stage of poker skill, the best players recognize if their opponents are even capable of thinking that deeply.

What separates the good players from the great is their ability to recognize what level their opponent is thinking on and adjusting their strategy accordingly.

If I know, for example, that my opponent only thinks about his own cards and will raise before the flop with J-J, Q-Q, K-K, A-A as well as A-K, A-Q and K-Q suited, I can fold if I have a hand that doesn’t slot into the top half of his probable holdings, and I can bet or raise anytime he checks with a weaker hand. If he checks all his weak hands and folds when I bet, I have a big advantage. If he calls because he doesn’t want to fold his hand regardless of what I might have, I’ll simply bet my good hands for value and he’ll call off all his money with cards that don’t figure to be as strong as mine.

Even if I know my opponent is starting with a bigger pocket pair than I have, sometimes I can still play against him and gain an edge. Let’s suppose I have

. I can call before the flop if I know my opponent is prone to keep calling with hands like pocket Aces or Kings, just because they don’t come around that often and look so good when they do. Most of the time, I’ll have to fold on the flop because my small pair probably won’t improve.

But if the flop is

my opponent will bet his Aces, figuring that I’ll fold. My edge is that by thinking about each hand on a deeper level, I know with near certainty what my opponent has, but he has no idea about my hand. If my opponent is playing his pair of Aces for their intrinsic value, and doing so without a single thought about what I might have, I might be able to take all his chips – and that’s the objective of no-limit hold’em.

If your opponent is reading you as you’re reading him, and you can take whatever steps are needed to plant a seed in his mind that you have a very different hand than whatever it is you’re really holding, you can simply play off the way your opponent reads you, and the actual hand you have is of little importance.

If you’re able to convince him that you are horribly weak but really have a very big hand, you can play off of your opponent’s read of you and allow him to do the betting until the time is right for you to put the hammer down and take all of his chips. That’s third level play, and very few of us do it as well as we’d like to.

There’s a lot to grasp here, and if you’re a beginning player you don’t need to absorb all of it in one fell swoop. It’ll take time. But from the get-go, if you realize that your opponent is thinking about what you might be holding as well as thinking about what you figure he has in addition to playing his own cards, you’re already getting a leg up on the learning curve.

Just knowing this concept is a big plus for beginners. If all your playing decisions – do I bet, call, raise, fold, or reraise – are predicated only on the strength of your own hand, you will play predictable poker, and therefore become a target for exploitation.

But just by thinking about it, and reviewing hands you’ve played in terms of third level thinking, your game will improve by leaps and bounds. 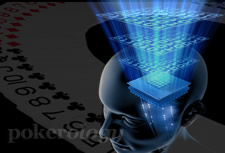