Independent Chip Modeling (ICM) determines your equity share of the prize pool in a tournament based on the stack sizes of the remaining opponents and the probability of your finish. With these probabilities, a dollar value can be associated with your stack size.

ICM is usually much more prevalent in SNGs, but can also apply when there are large payout jumps at the final table of a tournament. Most experienced SNG players are very familiar with ICM and it’s use, but may not understand the mechanics behind it, or how to calculate it by hand.

The need for ICM stems from a non-linear value of tournament chips. In all SNGs that are not winner-take-all, or in the heads-up stage, the chips that you risk will be of a lesser value than the chips you stand to gain.

The Mechanics behind Calculating ICM

Let’s look at the mechanics behind calculating ICM using an example situation:

The formula starts by calculating how much equity each player has in 1st place money, by looking at what percentage of the total chips a player has in play, and multiplying that by first prize ($84).

From there, the formula has to determine how much equity each player has in second place money ($36).This is a bit more complicated than determining first place equity, but it’s still doable by hand.

We should do the same for Stu:

…and if you add it up, this is what you get:

Armed with this information each player can use it to their advantage. Rick should know that he can shove on Stu’s big blind quite frequently. Stu will know he is risking $38.70 when he calls, and will get barely half of that back when he wins, so he will have to win more than 60% of the time to make a call if Rick pushes on him, and since only some hands win that often against Rick’s wide pushing range, he will fold a lot. Mark will know that if the others are in a lot of pots together, he may end up getting second by default, which drives his equity up from $27.09 to at least $36 (second prize) on a hand where he folded before the flop!

The Limitations of ICM

Independent Chip Modeling (ICM) is one of the most accurate ways to analyze the current value of your chip stack in a Sit & Go. But because it’s a purely math-based formula it misses some intangibles that the math doesn’t account for that should affect your decisions.

Lets look at some of these intangibles.

While a tight game is the cornerstone of early-game success, don’t over do it by making drastic changes to your ranges by playing much tighter than you would in a cash game or MTT. Simply play slightly tighter in a SNG than these other formats. By accumulating chips in the early going, you are setting yourself up to have the chip lead going into the bubble phase of the game, and you’ll enjoy this benefit.

ICM and the Position of the Blinds

In this situation, with the blinds at 300-600, ICM shows that Mark’s stack is worth $12.99 and Doyle’s is worth $8.73. The truth of the matter is that the biggest consideration is which player will be in the big blind next. Should Mark have to play from the big blind before Doyle, then Doyle’s equity is higher than Mark’s because Doyle is facing elimination first.

If you are going to eat a big blind that is more than one-third of your stack soon, before anyone else will, then shove wider to protect your stack. You don’t want to be forced to call with a bad hand in the big blind.

If you’re short stacked but someone else will face elimination before you within the next few hands, play a very tight range.

If you have 5-9BB or 8-12BB with the blinds about to increase, you are in a position where your stack will likely drop. In this situation you are in immediate danger of falling below this 5BB threshold. ICM calculates the number of chips you have divided by the number of chips in play to determine your equity, so it has no knowledge of this.

If you are using an ICM calculator to determine your pushing range and you are going to lose your fold equity if you do not push, then push wider than recommended.

If a solid player is in danger of losing their fold equity, and they push, realize they may be shoving a wider range, and call slightly wider than ICM recommends.

If the other effective stacks are dropping below 5BB as well, then do not push wider, because even if you gain chips, your fold equity is gone anyway, as your opponents with 4BB and less will call you with a similar range whether you have 4BB, 6BB, or 14BB.

Understanding the concept of ICM fundamental to success in SNGs. You don’t need to be a math geek to understand ICM – just being aware of the concept is the most valuable knowledge a successful SNG player can possess. If you can find a hand history of your own, then take an example of two, and work through it yourself. Play around with ICM calculators and study situations away from the table. It’s a great way to learn.

As was said at the beginning of this lesson – due to the non-linear value of tournament chips, the chips that you risk will be of a lesser value than those you stand to gain. Therefore the most important thing to remember is that your last chip is always going to be your most valuable chip. If you’ve fully grasped this concept then you’ll know that your chips and the leverage they provide is your biggest weapon.

Jennifear is an online professional MTT and SNG player. She is a well-regarded, highly experienced and hugely popular poker coach who has taught hundreds of successful players. 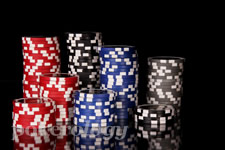 Due to the non-linear value of tournament chips, the chips that you risk will be of a lesser value than those you stand to gain.