How to Beat Beginners at Poker

“I don’t need a lesson on how to beat beginners at poker. They don’t know what they are doing!” Unfortunately, in poker that same inexperience can be to the new players’ advantage because in a single session of poker, luck can work against you.

It’s important to remember that just like in any session of poker, you should be making decisions based on expected value. You can sometimes get unlucky against a beginner because they are not playing poker “correctly”, and this can be frustrating at times. However, when you’re playing against inexperienced players, who make many mistakes, in the long run you will make major profits.

New poker players have easy to recognize tendencies in their play that you can captialize on. For this lesson, we will identify those tendencies using information from other lessons on Pokerology, such as our list of typical beginner mistakes. Then we’ll provide some effective poker strategies that you can use against these players, which should yield major profits.

The beginner who plays too many hands

This type of beginner is very easy to spot. They will often show down easily dominated hands like Ace-rag, K-8, Q-5, or any suited cards. They will limp into lots of pots and call a raise “just to see the flop”. Calling a re-raise out of position with a hand like K-J or A-rag is commonplace. Depending on if they are capable of folding or are a calling station, there are different ways to play them pre-flop:

The beginner who gets committed to a hand

Beginners tend to be calling stations and table sheriffs so look for them to call bets on all streets with easily beaten hands. For example, calling all the way with a hand like 7-7 on an A-K-T flop or calling large bets with middle pair.

The beginner who chases

The beginner who likes to chase can be easily identified. They will consistently call bets on draws without getting the proper odds (even gut-shot draws). They will chase over-cards and Ace high and will call quickly on a draw.

The beginner who bluffs too much

Keep an eye out for the beginner who makes large bets or raises that don’t make sense. This type of beginner will continuously make plays at pots without regard to his table image. This player will typically try to appear aggressive and show strength with physical poker tells (if playing live).

The beginner who plays passively

Be aware of the passive beginner who doesn’t play many pots and will often just call pre-flop. If they do raise pre-flop, they often check it down if they missed with over cards (i.e. Ace-King). They will often raise the minimum with marginal hands for fear of losing chips if they get beat – and will often fold to scare cards. Due to a lack of experience they play with a fear of losing and will only stay in a pot if they have a strong hand.

The beginner who bets based on hand strength

Beginners often bet larger with stronger hands and smaller with their weaker hands, especially on the flop. They will often limp or raise small with Aces, Kings and Queens because they think it’s smart to build the pot with a lot of people.

Your opponent has been involved in a lot of pots, limping into most and raising with his big hands. He’s already been going up and down in chips in the early stages of the tournament. Based on how many pots he’s limped into and the types of hands he’s shown down on the river after calling every street (i.e. top pair/low kicker, bottom pair, missed draws) you can tell he’s a beginner. The pots he has won were because his opponents were misplaying their hands by trying to bluff him or because he’s hit a draw to a flush or straight. When he did catch a card to make a draw, he immediately pushed all-in.

Your opponent is under the gun and, as usual, limps into the pot. Based on how many hands he’s played, this could be a wide range. One other player with 1,500 chips limps in middle position, and in the cut-off you look down to see

How should you play this hand?

Well, based on past behaviours you know the UTG opponent wants to see the flop and will call most raises. At the same time, while AK is strong it will often times miss the flop and you will have a hard time pushing your opponent off if he catches any piece. Because of that, limping is an option as it will disguise the strength of your hand and control the pot size. So should you limp? In some cases, this might be an okay way to mix up your play, but “disguising” and “mixing things up” only have value against someone who is paying attention to how you are playing. In this case, the UTG player is a beginner and is only playing his cards. Another reason not to limp is the presence of other people in the pot. Your limp will encourage others behind you to limp and they can easily catch a hand. Ace-King is also too good of a hand to not raise for value.

So the decision is to raise, but how much? In this case, we know the beginner will likely come along for the ride but we also want the other players to fold. We would much rather play this hand against one person if we can. We also want to exercise some element of pot control because AK could easily miss and a continuation bet on the flop may not be as effective against the beginner. With the blinds at 25/50 and with another limper already in, I would raise to around 250. The button and blinds fold, the UTG beginner player calls and the middle position player folds. Perfect.

The pot now has 625 and the flop comes

This should be a good flop for us. He’d probably have raised pre-flop with AA or JJ and may have raised with AJ, so if he has us beat now it’s only with 44 or AJ. Based on the size of the bet, it’s most likely that he has a small piece of it. It’s enough to confidently proceed as if we have the best hand. Because of the flush draw, he would more likely have bet around the size of the pot with a set of 4’s or AJ. He could be betting on a flush draw, but most beginners with his tendencies would more likely check/call with a draw after facing a raise pre-flop. We can safely narrow his range to any Ace or a pair of Jacks (J8-KJ is most likely unless it’s suited).

Now, how do we extract the most from this situation? Pushing all-in at this point might scare him off so let’s eliminate that. Slow playing might be best against some players, but not against a beginner. Again, he’s not thinking about what we have. If he’s only thinking about the fact that he has a pair, he will likely call a raise. He’ll call thinking two things: 1. this guy is trying to push me around, 2. even if I’m beat now, I could catch another card to win.

So let’s raise. Based on the range we are putting him on, we know he’s likely drawing to anywhere between 3 and 5 outs (3 outs if he has an Ace with a smaller kicker and 5 outs if he has a pair of Jacks). In poker, we win if we can cause our opponents to make an incorrect decision. In this case, if he calls any raise it would be incorrect because he needs at least 8.17 – 1 odds. In this situation, I would raise to around 800. After his 200 bet and our raise, there will be 1,625 in the pot and it will cost him 600 to call giving him about 2.7-1 odds. Remember though, he is not thinking about odds; he’s thinking about how reasonable the bet size is to call and we want him to call the maximum.

The turn is a

Wow! How can we get away from this hand? Well, it’s not as hard as it seems. First, we are experienced enough that we aren’t getting attached to our hand, right? Okay, so forget the fact that we have top pair, top kicker. Let’s keep narrowing down our opponent’s range of hands. We know he most likely has A-rag or a pair of Jacks. In previous hands, our opponent has not shown aggression unless he has a big hand or hit a draw and he has just called with his marginal hands. Also, because he’s a beginner there is no reason that we should think he is running some sort of advanced bluff.

Taking that all into consideration, there is a high likelihood that he has sucked out and we are now beaten. His most likely holdings are A9, J9 and 99. We still have outs vs. A9 and J9 and we are drawing dead to 99. There is now 4,175 in the pot and it costs us 1,950 to call, giving us 2.15-1 odds. Clearly, we aren’t getting the right price to re-suck and we should fold. We fold, confident in our read and our opponent shows us

Next time you’re playing against a beginner; make the effort to observe their actions. It shouldn’t be difficult to get a read on them, because as we’ve shown in this lesson beginners have easy to recognize tendencies in their play. They won’t be making advanced plays on you, and what you see is what you get.

It’s very important to realize that they are not playing you; they are only playing their cards. Therefore you should play “ABC” poker against these players because they in turn won’t realize that you are running some advanced play on them. Be careful not to get caught up in fancy play syndrome. Beginners don’t think about what you are thinking or what hand you are representing – they just know that they have a pair and that could be good, so they will call any bet.

If you remember this then you will make money against beginners in the long run. 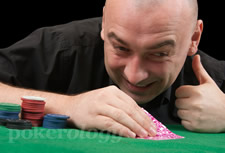 It’s very important to realize that beginners are not playing you; they are only playing their cards.