This lesson follows on from our typical beginner mistakes lesson, where we looked at things such as playing too many hands, playing out of position, and bluffing too much. By now you should have some playing time and poker experience under your belt, hopefully with a greater understanding of the game. In this lesson we’re going to examine more classic mistakes that are made at the poker table. As we go through the list, be honest with yourself and acknowledge if you fall prey to any of these chip draining leaks.

Many players are obsessive about defending their blinds. They allow their egos to convince them that it is wimp poker to be pushed off their blinds. Others feel that they have already made a down payment by way of the cost of the blind so they are getting a bargain. There are also obsessive blind stealers out there. For this reason you will hear time and time again it is imperative to gain knowledge about your opponents’ tendencies. Constantly defending your blinds with weak holdings is detrimental to your poker bankroll. If you demonstrate the discipline to fold those weak holdings you accomplish two significant upsides. First, you will save the chips that would have, in all likelihood, been frittered away by defending. Secondly, you will embolden the stealers to continue their attempts at larceny and they will begin to lower their stealing standards as you “train” them to recognize what a pushover you are. Then when you do have a quality holding you can surprise them by playing back.

Cold calling is the act of calling more than one player’s raise at once. If one opponent raises and then another re-raises and you just call, you are cold calling. It is a very weak play that indicates either timidity and/or a lack of discipline. Possessing either of these weak traits does not bode well for success. Generally, if your holding is not worthy of a re-raise it should be dumped. The mind set you should begin embracing is to consider the act of calling to be the last choice of possible actions. Patience and discipline should be exercised as it will lead to selective aggression which in turn should translate to profits. Of course, if you’re slow-playing to set a trap with a monster hand that would be quite a different matter.

This error is similar to #2 as it is a weak play and shows a lack of discipline. Over calling is to call a bet that a player or players to your right have already called. The classic example is a pre-flop limp fest and in that situation it can be correct with a hand that plays well in a large field. A small pocket pair or suited connectors would be two examples. However, post flop if you have third pair and it is bet and called in front of you then you need to come to grips with the obvious, which is – you are behind. Throw that loser in the muck and wait for a better opportunity.

We all know that tilt can be defined as playing poorly due an emotional state brought on by losing in a perceived unfair manner. It is exemplified by super aggressive play that is a desperate attempt to get even or punish the player who has inflicted the pain. Emotionally grounded players don’t usually go on tilt – or at least they don’t think they do. Semi-Stealth-Tilt or SST is a more insidious form of this malady. Semi – because it isn’t full blown tilt but just leaning towards tilt. Stealth – because it sneaks up on you in degrees, so slowly that you can be tilting for hours without even realizing it. This is somewhat common to intermediate players as they have advanced to a skill level that they sometimes put their game on auto pilot. So, maybe SST is not brought on by a series of losing hands but it results in the same impaired or diminished judgment that classic tilt exemplifies. Make it a habit to constantly monitor your game for SST so as not to fall prey to its negative impact on your results. Basically, you need to keep your head in the game at all times to make informed decisions.

The phrase fancy play syndrome or FPS was first introduced by the prolific poker writer Mike Caro many years ago. It is still as relevant as it was when first introduced to the public. Basically it relates to the desire to utilize the “fancy” or more complicated play rather than straight forward play primarily to be perceived by opponents as a super savvy, expert poker player. The old ego can really get some players into trouble. Although much of winning poker is about deception, going out of your way to take the fancy or tricky route instead of straight forward play is not a long term winning strategy. A classic example of FPS earning a negative result is slow-playing less than a monster hand thereby allowing an opponent to draw out and beat you. Most of the time straight forward, solid, aggressive play is your best course of action.

Since you only see a pocket pair, on average once every sixteen hands, when one lands it can be very seductive, especially if you’ve been forced to the sidelines by a long series of terrible hands that have gone immediately into the muck. There are several problems inherent in the play of small pairs out of position. In a full game, they rarely win in a showdown without improvement. The improvement needed is to make a set which is almost 8-to-1 against pre-flop. Sure, they can often be played in no-limit when implied odds are at work and you’re looking to set mine, but generally – when you’re in a full game you should exercise the discipline to only play quality hands from early position. When the game becomes short handed your small pairs will soar in value.

Most of us have heard the old aphorism – If after the first ten minutes at the table, you can’t spot the sucker, then it’s you. But how do you know? You need to start by studying your opponents to see who is or isn’t making mistakes. Hopefully you can do this before you even sit down so if you have a choice of seats you can make a better more informed decision. Remember, if you cannot determine that any of your opponents are making any errors in judgment then why stay in a game when there must be easier pickings elsewhere. You’ve probably heard the story about the ninth best hold’em player in the entire world. His only failing was that he regularly played with the top eight players in the world. Don’t fall into that trap. Study your opponents to gauge their level of knowledge and skill to make sure you can compete profitably in the game.

Beginner players who aspire to greater poker heights focus on good solid starting hand values, not playing too many hands, and they work hard on their discipline. In essence they evolve into good ABC players. In order to move up to the next level and become a skilled winning poker player one must do more than just play solid by the book poker. Poker is a game of relative values so you don’t necessarily need a monster hand to win – just one better than your opponent. Better yet, sometimes you just need a well timed/sized bet to make your opponent lay down the winning hand. The key element of recognizing profitable opportunities is good position. By playing position you’re in the driver’s seat to steal blinds and orphan pots. Force yourself outside the mind set of playing by the book, and take advantage of opportunities. Remember, good cards come and go but opportunities arise constantly.

#9 – Not Laying Down Losers

Not being able to make a good lay down in limit poker can cost you some bets. This same frailty in no-limit will get you to the felt quicker than any other mistake. This egregious error ties back to some of the other elements such as overcalling and cold calling raises. There is no magic pill to make sure you always lay down the losers but never lay down a winner. The proper feel will come through studying your opponents and gaining more and more experience. When put to the test think through the likely holdings of your opponent and consider giving him credit for the hand he is representing instead of your chips.

If you aspire to play poker well you must appreciate that knowledge of math and probability is a must. Most poker players know the standard odds of drawing hands like straights and flushes and if you don’t, take this as a wakeup call to search out that information and commit it to memory. Our beginner lesson on drawing odds outlines this fundamental concept and explains a shorthand method of figuring the odds you face when you have two cards to come and when the only card left is the river. This knowledge is critical to success.

If you can honestly state that none of these mistakes ever crop up in your game then I don’t want you playing at my table. We all make mistakes and you should consider these ten mistakes as a check list for better poker play and performance. If any of them resonate in your game then you can start to plug those leaks by setting goals and working on those aspects of your game. 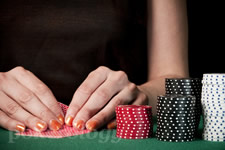 There is no magic pill to make sure you always lay down the losers, but never lay down a winner.