In addition to the variety of poker games and betting variations there are also different game formats and it’s important that you understand the differences. The two main formats of playing poker are cash games and tournament play.

Here are the main differences between cash games and poker tournament play:

Clearly there are some fundamental differences between cash games and tournament poker. Let’s take a look at each format in a bit more detail, starting with cash games.

This is the format where most players are first introduced to poker, many times played around the kitchen table. As the name implies it is played for cash not matchsticks, coupons, or any other medium other than cold, hard cash. This type game is played regularly all around the world in homes, clubs, lodges, casinos, cardrooms and on the internet.

Depending upon the stakes of the game there is normally a minimum buy in to get started. Many times in no limit play there is also a maximum buy in as well. This is actually a form of protection for the players. No-limit or pot-limit cash games generally require a buy-in of 20 to 100 big blinds. Therefore in a no-limit game with blinds of $1/$2, you can generally buy-in from as little as $40, but a standard buy-in would be $200.

Fixed limit tables usually require at least 10 times the small bet. Therefore a $2/$4 game would therefore have a minimum buy-in of $20. The buy-in amounts will vary from venue to venue – as will the stakes.

There are real money cash games to suit all budgets, particularly if you play online. In online poker the stakes are nearly always grouped into different levels such as micro stakes, low stakes, medium stakes, and high stakes. Here are typical groups you might expect to find at an online poker room:

This is just a fuzzy guide to illustrate the range of stakes available when you play online – there’s literally something for everyone. When you play live, such as in a casino, it’s highly unlikely you’ll find stakes as low as the ones listed here. In most casinos the lowest stakes are usually $1/$2 for no-limit and $2/$4 for fixed-limit – although you might find lower stake games in some venues, and in home games people often play for pennies.

Cash games are often called “ring games” and a table that seats 9 or 10 players is known as a “full ring” game. With the advent of online poker short-handed play has become very popular. Short-handed means the tables are usually limited to a maximum of six players. As such, short-handed cash games are normally referred to as “6-max”. These games have developed a large fan base because they are action packed. Players get to play more hands than in a full game and play their hands more aggressively. This is due primarily to the fact that strategically one cannot just sit back and wait for premium cards as the blinds come around much more quickly.

Even though the size of the table is the only difference between the two formats, they play very differently. These differences are highlighted in our separate poker lesson on full-ring vs. 6-max cash games, but as a beginner you’re much better off starting out by playing full ring games before trying your hand at the more aggressive 6-max games.

In a standard tournament format all players enter for the same amount of money which also carries a fee which the entity running the tournament keeps. As an example, “Casino Pokerology” might offer a no limit hold’em tournament that has a $50 entry cost plus a $5 fee to play. Once you post the $55, $50 of which goes into the prize pool and the other $5 is the fee to run the tournament, you may get $2,000 in non negotiable tournament chips. The blinds might start at $10 and $20 and escalate every twenty minutes. The continual escalation of the blinds forces the players to “gamble” more versus just playing conservatively and waiting for premium cards. This format is how the attrition of players whittles the number of starting players down to the eventual winners.

The number of winners is normally dependent on the number of starting players but typically in a tournament with a $50 entry fee, if there were 100 starting players providing a prize pool of $5,000 it may pay the last nine or ten players at the final table. First place might be in the neighbourhood of 30 to 50 percent of the total prize pool, with less for second, third, forth, and so on. This example is meant to demonstrate how a tournament can work, not to state as fact how they all work. The number of your starting chips, beginning blind levels, the length of time at each blind level and the prize pool distribution is at the discretion of the tournament organizer and can vary significantly. Always make sure you understand just what is being offered for your tournament dollar.

Remember that the values of the chips used in a tournament are only relevant to the tournament itself. You may have the more chips than anyone else after an hour, but you can’t walk away and exchange the chips for real money. The chips only related to your position in the tournament, and to get paid you must finish in the positions that get paid. For example, if a tournament plays the top 10 players out of 100, then you’ll get nothing for finishing 11th-100th. You might have the most chips with 50 players left, but it doesn’t count for anything unless you make the top 10.

In addition to the standard tournament format explained above wherein for one cost you’re in it and several players, such as ten, share in the prize pool there are a few other ways tournaments can work. We’ll highlight several formats.

A freeze out refers to any tournament format in which you cannot rebuy or add to your chip stack – aside from winning pots. The cost of entry and the amount of starting chips is set in advance as explained above. If you lose all your chips, you’re out. Freeze outs are the antithesis of rebuy tournaments, which are explained next.

Under the list of how tournaments are different from cash games the first difference listed was – if you lose all of your chips, you’re done and are out of the tournament. Well, not so in a rebuy tournament. This tournament format allows you to buy-in again if you lose all your chips. Depending on the format, you may be able to rebuy as many times as you wish, normally within a predetermined time limit, such as an hour or two. Many of these tournaments also offer what is termed an “add-on” which is just the ability to purchase additional chips, until a certain point such as before the first break. This format changes much of the normal strategy of tournament play as the participants are not as fearful of being busted out since they can rebuy. These players play significantly looser until the rebuy period expires. Once the rebuy period is over the tournament becomes a freeze out with no further chips added to play.

Using our WSOP reference once again, a one table satellite tournament to qualify for the $10,000 buy-in championship would require each of the ten players to post $1,000 (don’t forget the fee of $100) with the winner gaining free entry into the World Championship. “Free entry” actually means he would have put up $1,100, won $9,000, and gained a seat into the tournament for a total cost of $1,100.

Satellites offer a potentially cheap way of gaining entry into high buy-in tournaments. There are also satellites which win you a seat into another satellite, and so on. There are some that start with a free entry (referred to as “freerolls”), or just a couple of dollars. If you play online poker you will notice complete sections for satellite tournaments, for all sorts of events, such as the WSOP, WPT, and other special events and high buy-in tournaments.

This type of tournament was started by the online poker sites but has now spread into the bricks and mortar cardrooms. They are played both one table as well as multiple tables. The name comes from the fact that to sign up all you need do is sit down. When the players in the tournament have all sat down – it “goes”. As an example, you enter an online poker site and select a one table sit & go (SnG), pay your entry fee, sit down and wait. The tournament starts when the last player who will complete the table sits down. These type of tournaments on the internet have become extremely popular, so much so that sometimes you need to be very “quick to click” in order to get in before the table fills up. One table sit & goes normally pay the top three finishers.

Each format has it’s own unique strategies and we’ll cover these in much more detail in the poker lessons throughout the site. Many of the poker lessons on Pokerology are applicable to both formats but we also have separate lessons devoted to cash games and tournament strategies. By following all the lessons here on Pokerology you should become skilled in both disciplines. 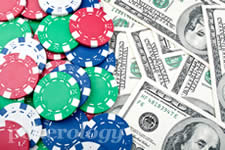