The Betting Variations in Poker

In addition to the many forms of poker, there are also several betting variations that are played. In our rules of poker lesson we explained how to play Texas hold’em but we didn’t mention the betting limits in our example hand, as it may have been a case of too much, too soon. In this poker lesson we’re going to use hold’em as the game format – but this time using the different betting variations; fixed-limit, pot-limit and no-limit.

For simplicity we’ll assume a hold’em poker game with a small blind of $1 and a big blind of $2. While the three different betting structures will all be posting the same amount, you’ll see a big difference in how the games will play due to the different betting variations.

In fixed limit, as its name implies, one’s choice of how much to bet is fixed by the stakes. Using our example of $1 and $2 blinds, the player “under the gun” (this is the first player to the left of the big blind) has three options.

If anyone wishes to raise then they can only do so in increments of $2, as shown here:

After this first round of betting the dealer delivers the flop. Players are still limited to a maximum bet of $2 and raises of $2. However, on the turn and river the betting amount doubles, so in our example the betting would now be in $4 increments. These are known as ‘big bets’. There isn’t a choice of betting either $2 or $4. If one now wishes to bet, the amount must be $4 and raises must be in $4 increments. In fact, a fixed limit game with blinds of $1 and $2 is called a $2-$4 game due to the early betting rounds being limited to $2 and the last two rounds doubling but limited to $4.

In fixed limit games, each round of betting usually has a maximum number of allowable raises, which is generally capped at three. If there’s a bet, it can usually only be raised three times, after which all players must call, or fold. In a $2-$4 game the most a player could wager on the first two betting rounds would be $8 (a call, raise, raise, raise) and $16 on the turn and river, if the betting was capped. It’s worth pointing out that some venues will allow more than 3 raises per betting round, so be sure to know the house rules before you sit down and play.

It is generally believed that the primary strategy for a fixed limit hold’em poker game stresses the importance of value betting. We will be explaining and expounding upon value betting and other strategic nuances of poker in later lessons but for now just know that value betting occurs when you actually want your opponents to call your bets as you believe you hold the best hand. So just save this little nugget of information for later in your poker development.

It’s also worth briefly mentioning a variation on fixed limit called spread limit poker. It’s very similar to fixed limit except the amount of the allowable bet is fixed to a range rather than a particular amount. For example in a $1-$3 spread limit poker game you have the option to bet or raise anywhere from $1 to $3. The normal restriction is that each bet or raise must be at least the size of the previous bet or raise. For example if the action is on you and an opponent raised $2 you could not re-raise $1. Your options for re-raising would be either $2 or $3.

In pot limit the first player to the left of the big blind has the same options as the player in fixed limit in terms of calling, raising or folding. The difference is in how much he can raise. Calling would simply be matching the $2 posted big blind. Folding requires nothing but mucking (throwing away) your cards. If the player wishes to raise he can raise to a total of $7. How that number is arrived at is as follows: small blind bet of $1 plus the big blind bet of $2 plus a call of $2 equals $5, which would be the raise. The raiser is then calling $2 and raising $5 for a total of $7.

To demonstrate the dramatic difference between our first variation of betting in fixed, let’s see what can happen after the flop in pot limit.

With $31 in the pot, the first player can bet anywhere from $2 to $31. The next player has several options, but if he wishes to raise then the minimum amount he can raise is the size of the previous bet. The maximum he can raise is $93 more ($62 in the pot, plus the call of $31), meaning his total bet would be $124. Wow, this could get expensive!

The thing to remember in pot limit is a player who wishes to raise first counts the amount he would need to call and adds it to the pot and then can raise the size of the pot. As you can see the betting in pot limit hold’em can escalate much quicker than in fixed limit hold’em. The emphasis in pot limit is placed on post flop play. The reason for this is that you can normally see flops fairly cheaply before the pot grows to the size where raises can get pretty expensive. So our nugget to remember at this juncture for the betting variation of pot limit is to focus to strong post flop play.

No limit hold’em has been called by many but most notably, Doyle Brunson (legendary poker player), as the ‘Cadillac of poker’. Its name says it all – there is no limit, except the size of the blinds. Still using the same blind structure as $1 and $2, the first player to act can call, fold or raise. The difference from the other two structures is that a player can raise a minimum of the size of the big blind, but his maximum allowable bet is only limited to the chips he has in front of him at the table (the amount he started the hand with). If there has been a bet beforehand, then the minimum raise amount would be the size of the previous bet. For example, if a player bets $50 then if the next player wishes to raise he must bet at least $100. This is the same as in pot limit, but with one big different, there is no maximum limit.

To use an extreme example to demonstrate the dynamic this format of betting offers, let’s imagine a player in the same $1 small blind and $2 big blind game that happens to have $10,000 in front of him. The action is on him and if he wishes to play he must at least call the $2, however he can elect to raise his entire $10,000!

So you thought pot limit could get expensive – not compared to no limit.

Please bear in mind that although this player has gone all-in for $10,000 – it’s really only $200 – which is the total amount the other player can wager. He can’t win money that another player doesn’t have, and vice versa. This is not like the movies! If you recall the scene from the classic western comedy ‘A Big Hand for the Little Lady’ – she gets up during the middle of a poker hand and runs to the bank to get the deed for the ranch – to call someone’s bet. Well, you can’t do that in Texas hold’em. You can’t do that in any casino anywhere in the world. Poker is always played at table stakes, and table stakes means you can only wager the amount of money you have in front of you when the hand begins. You can’t reach into your wallet mid-stream and pull out more money. You certainly can’t run and get the deed to your ranch, and toss that into the pot – or the keys to your BMW, as a way of calling a bet. That’s the movies – not real life!

The betting variations described in this lesson are listed in order of excitement, danger, risk and reward. The first variation, fixed limit is safer than either of the other two due to the limit which can be bet. As you can see both pot limit and no limit can become daunting as the amounts bet and raised can escalate very quickly. Which you may favour becomes a matter of taste. Some prefer the smooth, relaxing ride of a carousel while others crave the adrenalin rush offered by a roller coaster. 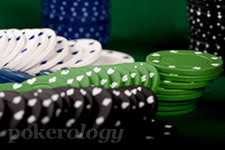 The betting variations described in this lesson are listed in order of excitement, danger, risk and reward.