A Basic Strategy for SNGs

SNGs are poker tournaments which don’t have a pre-assigned start time and begin when all the available seats have been filled, hence the name ‘sit-n-go’. There are many different types of SNGs, ranging in size from heads-up games to large multi-table events spanning hundreds of tables. The most popular format is a nine or ten player ‘single-table’ poker game, which normally pays the top three finishers.

The purpose of this lesson is to provide an overview of the basic strategy that’s required to become a successful low-stakes no-limit hold’em SNG player. We’ll look at basic strategies for the different stages of a typical single-table SNG, with particular attention to the bubble phase of the game. We’ll also throw in a few hints and tips along the way.

Key Concept: The Value of Your Chips

Before we jump in and begin discussing various SNG strategies, the most important concept to know is that the value of your chips in a SNG is non-linear. What does this mean? Well, in a cash game you might buy in for $100 and your chips will retain that value throughout the time you are at the table. If you were to win every chip on the table you’d be able to cash in all your chips at their face value. But this does not happen in a SNG. The winner of the SNG will have all the chips at the end, but unless the structure is winner-take-all he will not win all of the money.

Let’s assume you are playing a single-table SNG with a typical payout structure of 50% for first, 30% for second, and 20% for third. In this case, the winner will have all of the chips and the end of the game, but only receive half the money. Two other players will take home a slice of the prize pool despite not having any chips at the end.

In a SNG your last chip is always going to be the most valuable chip. The more chips you have, the less valuable that first chip is going to be when compared to your last chip. In other words, the ratio of the dollar value of your chips in a SNG is non-linear. Does this sound overly complicated? Well, don’t worry about the math involved right now. Just being aware of this concept is the most valuable knowledge a SNG player can possess.

The Stages of a SNG Tournament

Let’s break down a typical single-table SNG into several key stages and discuss some of the ways you might approach them for improved results.

A typical low-stakes SNG will feature mostly weak and passive play during the early blind levels. Just like in a cash game, the most preferable style of play is the one that is the opposite of the table. With that in mind the most common course of action is to play a tight-aggressive (TAG) style of poker. This means you should mostly be entering the pot with raises, and only limping with the occasional small pocket pair or speculative hand once a few players have already limped in too. You should play your big hands strongly and get value for them against opponents that are willing to pay you off. Even a hand as weak as top pair can reap a nice pot against the weak and passive players that are often found playing these games.

Once the first few players are eliminated and the blinds have increased a few times you will typically see the table tighten up. This is especially true if you’re playing in a turbo tournament. While some of the players with large stacks might continue to limp in with their weak aces and suited holdings, you should stick with a TAG style of play.

The first few levels of a SNG leave room for a bit of post-flop manoeuvring, but the middle stage doesn’t offer such freedom of expression. Paying attention to how your opponents have been playing now becomes more important. You should be able to detect which players are willing to gamble a little and which are going to be scared to bust out. Watch for situations that you might be able to take advantage of this, however be sure that you have a hand that is capable of standing up to resistance. Play your strongest hands for maximum value and you will be surprised how often you’ll be paid off.

This is the time when stack sizes become shallow in relation to the blinds and aggressive play becomes the order of the day. All-in shoves pre-flop are frequently the only move available and the chips can often move around the table as players fold to aggression. With a nice chip lead you should be able to control the table, especially when a couple of players are struggling with shorter stacks and are more concerned about outlasting each other – which is sometimes the correct play! At other times you will need to be selective with your spots and use the fold equity and any leverage that your stack might still possess.

The bubble phase of a SNG is when the concept of ICM (Independent Chip Model) comes into play. ICM helps you to determine what kind of hand ranges you can push or call with. Remember, the chip values in a SNG are non-linear and ICM is the method that is used to mathematically determine the value of our chips in relation to the prize pool. You don’t need to be good at math. Just knowing the basics of how the math works in certain situations is the key to manipulating players on the bubble of a SNG.

The following is a brief overview of what a generic strategy might be for the bubble stage of a single-table SNG that pays the top three positions. This is all based on the concept of ICM:

Your chips and the leverage they provide is your biggest weapon. Generally you will want to take advantage of the existence of the short stack by attacking the players in second and third, especially if the short stack is getting desperate in chips.When the short stack has folded you can usually raise with impunity on the others.The fear of busting out before the short stack is what they fear most, so use this knowledge wisely.

When you’re in second place you’ll be able to bully and attack the player that is third in chips, particularly if you’re seated to his right.Although you will need to be very wary anytime the chip leader has acted or is still in the hand. You should also pay close attention to the position and potential play of the short stack. While you can still take on the other players remaining in the game, you will need solid holdings to cross paths with them.

Most beginning SNG players are going to be too scared to play when in third and will elect to try and outlast the short stack and “fold to the money”. By accident, these players find themselves to be using the correct strategy. If you and the short stack are close in chips you will need to be more aggressive since there is no guarantee that the other player will lose a hand anytime soon.However, in most cases it is unwise to play too loosely, especially when calling raises.

Depending on your exact situation, you are going to have to make a move on some pots or risk losing any fold equity you still possess. The best player to attack is the player that’s currently in third-place. However, do not be too shy about potentially facing anyone. Time is running out and the shorter your stack becomes when compared to the blinds, the more desperate you may need to become. Do not have the fear of not cashing, since being in fourth place means you wouldn’t be cashing right now anyway!

There are many weak and passive players to be found at the low stakes SNGs and you should be taking advantage of their tendencies. For every poor play you encounter there is a good counter play.

Here are a few tips and tricks that you might be able to use during the course of a typical SNG:

Not all of these SNG plays are based on math – quite a few are geared more toward taking advantage of how a random player would generally behave. It’s important that you always pay attention to the tendencies of your opponents, including their hand ranges and the level of aggression they exhibit in their play. If you find an opponent who plays two-pair like it’s the nuts then use this information by shoving all-in with your sets, straights and flushes on the river. In the long run you’ll get paid off more this way then by making a value bet – unless the board makes a straight or flush too obvious. Likewise, if you find an opponent who plays top pair like it’s the nuts then be sure to play your two-pair hands very strongly.

The key points to take away from this lesson is that in general you should play a tight-aggressive style during the early and middle stages of a SNG and be taking advantage of ICM-friendly situations later on in a SNG. Remember to always be aware of not only your chip stack but also those of the other players and their positions at the table – and where appropriate, use your chips as weapons.

Simply knowing that chips stacks are always changing in value as players bust out of the game will give you a huge advantage over your opponents, particularly during the bubble stage of a SNG. Depending on ICM, position and what you have learned about your opponents will often dictate your decisions much more often that your cards might. Understanding such concepts in addition to paying attention to the tendencies of your opponents will help you become a successful low-stakes SNG player. 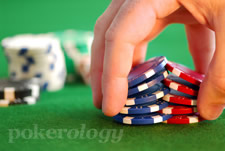