Most dedicated poker players are constantly analyzing their play and that’s important if you aspire to continuous improvement. There are a number of ways to get a bead on what you’re doing and the results it’s creating. Let’s take a look at three of these methods including their upsides and potential weaknesses. We’ll explore record keeping, coaching and the use of statistics.

Many players keep meticulous records of poker sessions including where they have played, for how long, at what stakes, in what type game and, most importantly to them – how much they won or lost. While keeping a record of such basic data has its merits, aside from documenting whether you’re ahead or behind, they can present some real conundrums as to what they mean. Don’t be too quick to jump to invalid conclusions just because they seem to fit. Although rather simplistic many players conclude one of the following:

Poker is such a complex endeavour that there are a myriad of variables at work and short term results can be very misleading as to their genesis. A good friend of mine recently related his desire to start honing into his opponents’ playing tendencies to help with his poker results. His epiphany came as the result of his realization that he regularly played about four poker games at the same time online. With four different games commanding his attention there wasn’t much time to do any decent player profiling. The best you can do in this situation is to focus on your hand values and position. My friend believed that since he was not focused to his opponents’ playing tendencies that his results were suffering.

As my friend is a dedicated poker player, he immediately began to play in fewer games and started to really build a “book” on different competitors that frequented the online poker games in which he played. Whether on the internet or in the bricks and mortar card emporiums, studying your opponents’ tendencies is a critical part of becoming a winning poker player. Soon after my friend dedicated himself to studying his opponents, his results improved so drastically that he attributed his new found winnings solely to improving upon this one attribute.

While focusing on opponents’ tendencies should greatly improve your decision making ability, were my friend’s short term positive results directly attributable to his improved focus on his foes? Maybe, maybe not! My point is that you should not allow short term results to delude you into thinking you can be 100 percent certain of their cause. With so many variables at play in poker, it just isn’t realistic to make that leap. Can you say it wasn’t just a run of good cards? Sometimes in poker the explanation is that simple and it can be dangerous to leap to other conclusions.

While my friend’s conclusion as to his improvement may well be flawed, his dedication to improve his poker game is admirable. Pick elements of your game that you may feel could use some shoring up and dedicate yourself to improving those aspects. While short term results can be misleading, working on various elements of your game will definitely pay dividends in the long run.

By keeping your own records to analyze your play, you’ll know whether you’re winning or losing. While that can be a telling statistic it’s far from a complete story. For instance, if you are winning does that mean there is no more work to be done? I think we both know the answer to that question. You should never stop learning.

With the advent of online poker there are many statistical tools available that can help you analyze your play. There are various products, that for a fee, will track and report to you all kinds of statistics that can help you hone in on what you’re doing well and where your game might need some help. At the very least, if you play online poker, you should be availing yourself of the statistical overviews that are offered for free. Whilst they might not as in depth, these stats can still be very beneficial.

Although I believe you should be reviewing these stats, I feel a word of caution is in order as these statistics need to be taken with more than a grain of salt. For example, if you have requested the stats for the last 2,000 hands you have played you won’t be able to assess the texture of the games played and therefore the numbers will have to be viewed out of context.

These statistics are not guaranteed to give you solid answers but they will give you food for thought to help you analyze your game. Not a bad tool, especially for the price. Another positive aspect for me is the fact that I know every hand I play is being recorded so it helps me immensely with my discipline. If you’re not currently taking advantage of such a service, then start immediately.

There are certainly professional coaches available in the poker community to help you analyze your play. Along with the rising popularity of poker there also have been a number of boot camps spring up which give several days to a week or more of intense instruction. While these approaches can be of significant value they also can carry significant price tags.

Your first and most important coach is yourself. If you have the desire and will to improve your poker game you will work hard to do so. You will read the current poker literature and study the poker lessons available right here on Pokerology along with analyzing situations both at the table and away from it. I have found a good exercise in the analysis of your play is to review after a session a few hands that you believe were played extremely well and also a few that in retrospect were not played well at all. If you cannot recall and honestly reflect on a few hands that could have been played better you are either a world class poker player or delusional. Which of those two choices do you believe is more accurate?

Be honest with yourself and set goals to improve the identified areas you believe need shoring up. Even world class poker players, if responding with total candour, would admit that certain areas of their games might require additional work. Be honest with yourself, set realistic, aggressive but attainable goals and work hard to achieve them. That will be a gratifying experience.

Make your own check list of important poker attributes which you can review on a regular basis to monitor how well or poorly you’ve been addressing each element. Here is a short list to help you get started and is certainly not intended to be all inclusive. I think it is important for you to make your own list.

Again, these are just some elements that come immediately to mind. Add or subtract others but create your own list and be honest with yourself. Use any of these three methods to take a harder look at how you’re playing to assess if there are significant shortcomings in your game that need attention. The major key in analyzing your game is being honest with yourself. After all, you’re the coach! 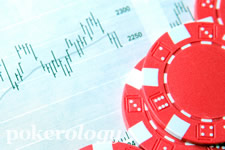 Be honest with yourself and set goals to improve the identified areas you believe need shoring up.