It’s that time again, poker fans! The hype and hysteria that has stretched through the late summer and early autumn is about to end – finally. The November Nine ™ will be upon us in a matter of days. After all these months, a champion will be crowned at the Rio. Even as the time to the biggest final table in poker winds down, many questions still remain. Who has the best chance to win? Will Ivey’s skill and experience be enough to demolish rookie Darvin Moon’s mountains of chips? Which potential champion will be the best representative for the game we all love? 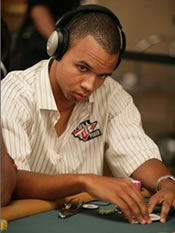 While this piece is not intended as a slight to the other worthy contenders at the final table, the poker media (of which this site is a member) has chosen to focus on Moon, the “Luddite Logger” from Maryland, and Ivey, the photogenic phenomenon of poker. Although Ivey sits in seventh place and Moon’s chip stack puts him as far away from the other competitors as Las Vegas is from his namesake, more than seventy-five percent of the participants in an online poll favored Ivey to win the event.

This piece will present arguments as to why an Ivey win would give the game a much-needed shot in the arm, while a victory for the “Moon Man” would be a shot in the foot.

The larger starting stack and slow structure of this year’s Main Event has allowed the more skilled and experienced poker players to make deeper runs against a massive field than they have since the start of the poker boom. With pros like Ivey, Jeff Shulman and James Akenhead at the final table, as well as a deep finish by Antonio “the Magician” Esfandiari, long-time poker fans are finally seeing how skill can take over a tournament. For those who still believe that a poker table is no different than a slot machine, they may start to believe that intelligence and cunning have more to do with success than a rabbit’s foot and a four-leaf clover if the “best poker player in the world” takes down the game’s biggest title.

On the other side of the coin, we have Darvin Moon, who plays like he has a horseshoe surgically implanted deep in his rectal cavity. By his own admission, if he had to “play poker” against pros at Ivey’s level, he would be well out of his depth. He always seems to have the best hand, never takes a bad beat and catches pocket aces easier than subway riders catch swine flu. He’s not just a card rack; he’s the whole card closet. 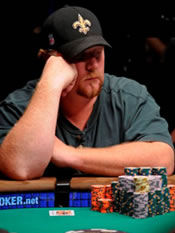 In a recent interview with ESPN, Ivey showed the kind of charm and charisma that makes men jealous, women swoon and, more lucratively, advertisers drool. With a win at the Main Event, not only will Ivey be recognized as the best player on the planet, he will also become the most visible – and he won’t need to dress up like Patton or Caesar to do it. The publicity that would follow him from the moment he clasps that gold bracelet around his writs would put him on a level with LeBron James, Michael Jordan and Tiger Woods. Could we possible see the first poker player on a Wheaties box?

If Moon wins, you’ll be more likely to see him on a poster with the caption, “Have You Seen Me?” Appropriate to his occupation as a logger, Moon has all the warmth and charisma of an old-growth tree. He treats media interviews with thinly veiled disdain and has repeatedly stated that he does not want to be an ambassador for the game if he wins. While Las Vegas oddsmakers have made him the favorite to take down the bracelet, they should start posting odds on whether or not he’ll bother to show up at all.

Just as the success of a young Tennessee accountant caused an influx of new players six years ago, an Ivey win could also bring new blood to the game. Moneymaker’s win influenced an entire generation of players to take up the game of poker, many of whom were much like Moneymaker himself: young, educated and white. If Ivey can win the biggest event in the game, he could potentially attract an untapped section of the population into poker, just as young Eldrick Woods pulled in a new audience to golf ten years ago. With one prominent young poker player already in the White House, an Ivey victory could open up the doors to the poker rooms for other young African-Americans.

Who Wants it More?

If desire could be measured in chips, Ivey would have an insurmountable lead at the final table. He understands that this victory would be the ultimate career milestone. Although every fan of the game admits that the only thing between Ivey and a spot in the Poker Hall of Fame is time, a Main Event bracelet would shorten that time from by several years and insuring that he would become the youngest member of poker’s pantheon.

In much of the play displayed during the broadcasts, Moon seems more comfortable with chainsaws than with chips and chairs. “No phone, no lights, no motorcars. Not a single luxury. Like Robinson Crusoe, it’s primitive as can be.” Is that a line from the 1960’s sitcom Gilligan’s Island, or a line from Darvin Moon’s bio? He claims that he hasn’t watched any of the tournament coverage – which is understandable, since he can’t pick up ESPN with a rabbit-ear antenna and aluminum foil. He doesn’t own a cell phone, a computer or an email address. He has never played online poker, never read any poker strategy sites, and has never read my pieces on Pokerology – what the &^%$ is wrong with him?

As a poker fan, I can only hope that Darvin Moon enjoys his second-place money, installs some indoor plumbing and parties like its 1899. As for me, I’d rather watch Ivey fasten his eighth bracelet, drink some Dom Perignon at the after-party, and blow it all at the craps tables that same night!

(Note to Phil: This is good enough to get me an invite, right?) 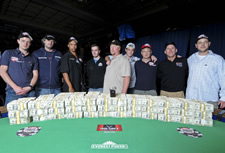 If desire could be measured in chips, Ivey would have an insurmountable lead at the final table.