The Worst Poker TV Shows Ever Made

While everyone has their own favorite online poker sites, most players can agree on which TV shows offer the best presentation of and insight into the game. I listed my top 5 favorites in my previous article ‘The Best Poker TV Shows Ever Made‘.

Of course, for every classic TV show, there are a dozen failures. Poker shows are no exception, especially ones that try to go “behind the scenes” or tell the “real story”.

Here are some of the worst poker TV shows ever made:

Fox typically airs their hybrid poker tournament/slick game show on the Sundays that they don’t carry a late-afternoon NFL game. The overeager host, the overcaffeinated Daniel Negreanu, and the generally poor play of both the contestants and the celebrity opponents can make this show a trial to watch.

The contestants all come with backstories straight out of Central Casting:

While the human-interest stories are a nice change of pace from the grizzled rounders and online hotshots, the treacly treatments given to the contestants are often overbearing.

This failed experiment from the WPT producers has to feature some of the worst poker action in recorded history. The amateur players apparently luckboxed their way from a free online tournament onto a national TV show. The players in this show make Paris Hilton look like Doyle Brunson. The worst part is that the show functions less as a poker tournament and more of an infomercial for the website.

Another example of how networks force the game show format onto a poker show. Much like ClubWPT.com and the Million Dollar Challenge, the players won their way onto the show through online freerolls – always the hallmark of poker talent – and chose one of four Full Tilt Poker pros that they could face in heads-up matches.

The show actually saw its ratings fall during the first episode. Some of the blame for the show’s failure after seven episodes can be attributed to host Steve Schirippa laying on his “Sopranos” act thicker than a concrete overcoat.

Have you ever wondered how the cast of “Revenge of the Nerds” would have turned out if they were young internet poker players? Wonder no more! This abysmal “reality” show depicts four young online poker geeks sharing a house in Las Vegas in preparation for the WSOP.

The young players attempt to earn $2 million in two months playing nosebleed-stakes online cash games. They also try to be the “cool kids” that they never were in high school. Check out the clip above to see how these guys interact with real live Playboy Playmates!

You would think that the network that produces the WSOP, along with the writers of the seminal poker movie “Rounders”, would know how to put together a fictional poker TV show. Wrong! This inchoate mess mixed in a crooked casino boss with a young player struggling with his “daddy issues”. The poker action was minimal at best and had almost no impact on the overall story. Mercifully, it “folded” after nine episodes. 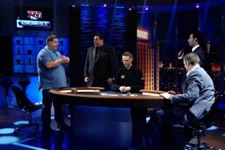 The players in this show make Paris Hilton look like Doyle Brunson.