The Worst Poker Movies Ever Made

Poker movies have had their share of “bad beats” in recent years. While most of the best poker movies mentioned in my previous article took place before the “poker boom”, those that came after showed how Hollywood can jump on a fad – and stomp it nearly to death.

Here are my top 5 worst poker movies ever made:

When a poker movie has a main character with the nickname “Ace”, that’s a bad sign. When the script sticks that lame moniker on the lovely and talented Dominique Swain, that’s a crime against humanity. Swain plays a medical student who uses the poker skills she learned as a child to pay for medical school and to help her father (Michael Madsen) out of his gambling debts.

This 2006 James Bond film (the first with Daniel Craig as Agent 007) has been panned as the worst in the forty-year history of the franchise. For a government agent with expertise in extracting secrets, Bond is so incompetent at poker that he can’t notice a false tell when he sees one.

The difference between the ridiculous final hand here and the one in “Maverick” is that the “Maverick” hand is played for laughs, while the “Casino Royale” finale just looks like a Hollywood writer’s idea of how poker should look.

This clusterbomb had lots of stars (Woody Harrelson, Cheryl Hines, Ray Romano, Dennis Farina), lots of poker action (including commentary from poker author Phil Gordon) and several identifiable characters (David Cross as a proto-Hellmuth, Hines as Annie Duke-lite). Only one thing separated this movie from being a classic poker comedy: a script.

Zak Penn (“X-Men: The Last Stand”, “The Last Action Hero”) directed this atrocity and encouraged the actors to improvise, only giving them brief notes on the characters. The lack of story and cohesion throughout the film shows, as the final product of this bold experiment turns into one big mess.

Combine a leading man with zero charisma (Eric Bana) with a romantic comedy veteran (Drew Barrymore), mix in a crusty father figure (Robert Duvall), then set the whole thing around the World Series of Poker. What do you have? “Lucky You”, a hot mess of a movie. Even Barrymore’s eternal charm and optimism can’t save this trainwreck. Bad poker, bad acting and bad writing make this one baaaaad movie.

“Deal” was the first major movie to feature the World Poker Tour. With its dismal box office numbers and horrible reviews, it also may be the last. The movie had a Rotten Tomatoes rating of 3%, making it the “Ishtar” of poker movies.

Even in a cutthroat world like pro poker, none of these characters is remotely likeable. The ex-pro (Burt Reynolds) uses the young hotshot (Alex Stillman) as a surrogate for his own means. The hotshot is an obnoxious brat and his new girlfriend (Shannon Elizabeth) turns out to be a (SPOILER ALERT!!!) call girl.

Which poker movies are in your Netflix queue? Which ones sit on your DVD shelf, and which ones deserve a seat of dishonor in a roaring fireplace?

One Response to “The Worst Poker Movies Ever Made” 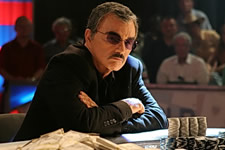 The movie had a Rotten Tomatoes rating of 3%, making it the “Ishtar” of poker movies.