Winning the Big One

I go to Las Vegas every year to participate in the World Series of Poker. I find even the thin possibility of winning a World Series of Poker bracelet to be a sufficient lure to justify the relatively large upfront expense and the relatively small chance of success. It also gives me an opportunity to reunite with my many friends and associates in the poker world. The World Series is kind of like a convention for poker players. I haven’t missed one for over ten years.

I typically aim for the $1,500 to $2,500 stud and H.O.R.S.E. events rather than the Main Event. They suit my pocketbook, my skill set, and my schedule. I tell myself that if I win one, I’ll use the winnings to buy myself into the main event. That’s the only way I can really justify taking the time off work, flying my wife out to Las Vegas, and spending the $11,000 or so for the entrance fee and the expenses connected to staying in Las Vegas for a week or two beyond my expected departure. This longshot parlay possibility keeps alive the dream of ultimate poker glory.

Not so this year. This year I decided to alter my plans. I aimed higher.

The prize I sought this year was nothing less than leaving a good impression on my younger daughter Hannah. She was a university student in Philadelphia who had recently turned 21. I decided that I would do my best to impress her with a trip to Las Vegas during the poker-rich time of the World Series of Poker.

Accordingly, I decided to go first class – well, at least in a slightly more elevated style than my typical low rent way of going to Las Vegas. Instead of looking for the cheapest room, I booked one right at the Rio – ground zero for the WSOP. I wanted us to be where the action was so I could conveniently show her around, introduce her to my many friends in the poker industry, and have her fully appreciate the thrill of world class poker.

Instead of booking a super-cheap sub-compact car I splurged for the next size up. Though I typically do not distract myself with any of Las Vegas’ many forms of entertainment, this time I indulged myself by buying seats for both the spectacular aquatic Cirque de Soleil show at the Bellagio and Penn & Teller at the Rio.

Similarly, when it came to food I avoided my typical poor man’s rations of Roberto’s tacos and Vietnamese noodle soup. My daughter and I dined instead at the lovely Bellagio Café, at a fine Indian Restaurant at the Rio, at a great all-you-can-eat Sushi restaurant in Las Vegas’ wonderful Chinatown, and at a fine Ethiopian Restaurant. I wanted my daughter to have, literally, an excellent taste of what Las Vegas had to offer.

When it came to poker, I decided that the typical $1,500 stud event in the World Series of Poker would not do for this trip. I wanted something better, richer, and more meaningful for us to experience. I wanted an event that we could both enjoy and that I actually had a fair chance of at least cashing in. Better to enter a small tournament, with relatively weak opposition, in an environment where my relatively inexperienced daughter would not be overwhelmed or intimidated.

And so, I entered us into the smallest poker tournament I could find – the 6:00 PM no limit hold’em event at Poker Palace. Never heard of the place? No matter. That’s what I was looking for – a place that few if any experienced tournament players would come to. I wanted a place frequented by beatable locals who play to have fun, get free drinks, and get out of the house.

Such a place is Poker Palace. It is in North Las Vegas in a largely Mexican community that appears forgotten by those focused on the glitzy strip or even the somewhat rehabilitated Downtown. The casinos on this side of the city are largely unheard of by the tourists or even regulars who are seen at the more popular poker rooms like the Bellagio, Caesar’s, the Venetian, or Binions. These places have names that are, at best, only vaguely familiar: The Opera House, the Silver Nugget, Jerry’s Nugget and of course Poker Palace.

We arrived early, signed up, got our seats, and found ourselves among 40 contestants. I spoke briefly with the floorman right before the event began. Sure enough, every single player but my daughter and I were regulars. They were friendly, drinking, happy gamblers out to have a good time. They were just the type of opponents I wanted for my daughter’s first poker tournament. They might also be the type of opponents who would give me a legitimate chance to do well and impress Hannah.

The first pleasant surprise was that with four tables nestled closely together, I got to watch my daughter play! She was seated facing me, just one table over. She looked intimidating, sitting erect in her chair, her serious expression remaining immobile on her face as she played. She seemed to do great, folding weak hands and betting purposefully when she entered a pot – usually for a raise. She lasted through the first break, her stack at slightly higher than par. I did okay myself, with about the same stack size as she.

Though we were told that the event usually lasted just two hours or so, they didn’t consolidate down to three tables until just about 150 minutes into the event. Hannah remained an active and moderately successful player throughout. Thirty minutes later when we were reduced to two tables, she was moved to my table, four seats to my left.

My stack continued to grow, as I knocked out a couple of the old timers. My daughter departed in 17th place – beating the five other women who entered the tournament and 18 men besides. She took her place on the rail where she conversed with a couple of the guys who had been knocked out but who were remaining to watch their friends.

At four hours we were reduced to a final table. I had a median stack and proposed a chop – eager to end the game so I could spend time with my daughter. All but the two large stacks were willing. So we played on. Over the course of the next fifteen minutes I knocked out two players, re-proposing a chop each time. At least one player objected so we continued to play on.

Finally, at four hours and twenty minutes, when it got down to just three of us, and our stacks were relatively even (I had slightly fewer chips than either of them), I proposed a chop again. One of my opponents, a sulking local chap, declined. On the very next hand, with two deuces, I shoved in my entire stack. Each opponent called. The first revealed AJ, the second KQ. The flop, turn and river didn’t help them. I tripled up and left my two opponents with barely enough chips for the next round of antes and blinds. Though I was almost surely going to win the $350 first place prize, to show that I was still eager to end matters quickly, I once again offered to chop – $250 for me and $200 for each of them. They both accepted.

Just as I was starting to second guess myself for not playing it out and taking the entire first place prize, my daughter congratulated me. She had been paying attention. She was pleased that I had won. But what really seemed to impress her was my willingness to consistently make the offer to end the tournament rather than change my tune when I had the large chip advantage. She told me that she really enjoyed the fact that I was seemingly more interested in being consistent and offering a chop to my opponents than in extracting the maximum amount of money by insisting on playing it out – once I had the large chip lead. She saw that as taking a principled position – one that she told me she respected.

It’s true that this was the smallest tournament in Las Vegas and a distant cry from winning a WSOP bracelet and all of its attendant glory. But in winning this tiny $20 tournament at Poker Palace I won the biggest prize imaginable, my daughter’s admiration and respect.

2 Responses to “Winning the Big One” 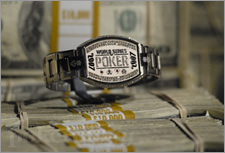 She looked intimidating, sitting erect in her chair, her serious expression remaining immobile on her face as she played.