Poker is a complex game – easy to learn but hard to master. Accordingly, many have tried to simplify the learning of poker strategy by embracing broad generalizations about the game. Many of these generalizations have been passed down from teacher to student and from one generation to the next. They seem so simple and commonsensical that they are rarely, if ever, challenged. They have formed the body of what I refer to here as “conventional poker wisdom”.

For the most part they tend to be generally sound practices. But upon closer examination, they prove to be worthy of, at the very least, exceptions. In some cases, they should be discarded entirely.

Here are some examples of these pithy bits of conventional wisdom. As you read them, see if you agree with them.

In this column I’ll deal with the first three. Let’s take them one at a time.

Generally speaking, this makes a lot of sense. If you are playing poker for more money than you can comfortably afford to lose you may well be too nervous or anxious to play your best game. If the bets represent more than a sum that you feel comfortable with, you may evidence a timidity that will hurt your bottom line. Good poker players will notice that you are playing with extra caution and will exploit it by aggressively betting and raising into you – causing you to fold hands that would be profitable had you more stomach for the stakes.

Even so, it’s sometimes correct to play over your head. Keep in mind that you don’t have to commit yourself to playing at a higher limit permanently to do this. You might just want to take a stab at a bigger game. In those instances, you don’t need to have a bankroll large enough to make a steady diet of the bigger game. You can take a stab with no more money than you feel comfortable with in the smaller game.

Say, for example, that your regular game is $10/20 limit hold’em. You’ve been playing in it for a couple of hours and have noticed that it’s gotten especially tough – with a lineup of rocks, pros and skilled amateurs. At the same time, you notice that the $20/40 game has some really deep pocketed, loose and passive fish playing in it. The toughest players have left it. You have enough in your bankroll to support your regular $10/20 game but not enough to handle the expected variance of the typical $20/40 game. Conventional wisdom would scare you away from the $20/40 game. But I say no problem. Leave your $10/20 game and take a seat in the juicy $20/40, but with a commitment to play more tightly. If you get lucky and catch some excellent starting hands you may well profit enormously from the stab. If you get unlucky in the first few rounds and lose more than you feel comfortable losing, you can always put your tail between your legs and move back down.

Realize that I’m not advising that you make a habit of this type of play – but it’s not something to eschew completely. It also has the potential advantage of helping you with the lower tier poker game once you go back. You may have a stronger than typical image to the other players there – who may have noticed you playing in the “big game”. And your own confidence may be enhanced. You might view the smaller stakes as more like a game and less like real money – making you less timid and more aggressive – which might be just what your game needed.

Don’t Draw to an Inside Straight

This is conventional wisdom that originated in the game of five card draw – a variation of poker seldom played these days in casinos. It’s rooted in the generally sound advice for that game that one should not call a bet before the draw if you’re holding four cards that need an inside card to make a straight – 6-7-9-T for example (as opposed to an “outside” or “open-ended” straight draw like 8-9-T-Q). The odds of making that inside straight are roughly 12:1 against (as opposed to roughly 4:1 against for an open-ender). Pot odds in a typical draw poker game are generally no better than 7:1 before the draw, making it an unprofitable play.

However, in stud and hold’em, the poker games most of us play today, the pot may well contain a sufficiently large amount of money before the river to make such a draw profitable in the long run. Let’s take hold’em for example. By the turn, in a loose game, there may be 15 or more large bets in the pot by the time you have to call or fold with your inside straight draw. If that’s the case, and if the board and the betting have convinced you that hitting your inside straight will give you the best hand on the river, then it may make make sense to call a bet and draw to your inside straight. In addition, when you factor in the additional bets you will make on the river if you hit your hand, it absolutely makes sense for you to call the bet and draw. It may even make sense to raise with your draw!

Based on the above, I would advise you to completely discard this old saying. Replace it with something a bit more cumbersome but much more useful. Always consider the pot odds and the odds against making your hand before calling any bet when you’re on a draw.

This advice stems from fears that conventional poker players had about cheats and card sharps. They figured that the out-of-town stranger whom they didn’t know would be more likely to cheat them then any one of the regulars in their home game. From all that I’ve experienced and read, however, you’re no more likely to be cheated by a stranger than by someone you know. Better advice is to always be cautious of card cheats, to know what to look for, and to leave a game if you think that you’re being cheated

In my next column I’ll deal with the remaining three pieces of conventional poker wisdom. 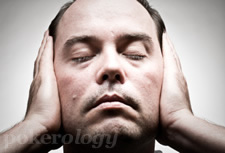 If you get lucky and catch some excellent starting hands you may well profit enormously from the stab.