In poker, everything is relative – including and perhaps especially your level of skill. In the end it’s not about how good you are, it’s about how good you are in comparison to your opposition. Just as you cannot figure out the best way to play a hand without having some idea of where you’re at – whether the cards you’re holding are ahead or behind of the opposition – you also need to get a solid idea of where you’re at in the session. Not in terms of how many chips you’ve won or lost, but in terms of how your ability matches up against the other players sitting around the poker table.

And when it comes to sussing out the poker competition, no error is more common, more pervasive, and more deadly than the simple mistake of underestimating our opponents. One way or another, we keep finding ways to downplay our adversaries. A savvy poker player purposely shows down a couple of garbage hands and gets permanently labeled as a lucky moron. A tight-fisted rock switches gears and bluffs his way to a massive stack before anybody at the table starts catching on to what he’s doing. An elderly player enters the game and opponents assume he can’t be aggressive. Or a woman sits down to play and her male opponents immediately label her as bluff-bait.

Our tendency to underestimate our adversaries goes hand-in-hand with our inclination to overestimate ourselves. Especially in a super-competitive environment like poker, we all want to see ourselves as better than the other guy. It’s how we define ourselves in this game. Beat the other guy more often than he beats you, and you’re a good poker player. Don’t, and you’re not. In this eternal fight for supremacy, nobody ever wants to be considered average or, god forbid, below average. So we’re left with the statistical impossibility that the majority of people who play poker consider themselves above-average players. There are several fancy psychological terms that could be apt here, like illusory superiority or the Lake Wobegon Effect, but essentially it all boils down to plain old-fashioned wishful thinking.

Poker has often been likened to a kind of warfare. Our chips are “ammo” that we “fire out” at the enemy. We speak of sophisticated plays as “weapons” in our poker arsenals. And the ultimate goal is to capture the enemy’s territory, i.e. chips. Most of the really serious poker players approach the game with this combative mindset, so in that sense it can be instructive to consider some lessons from military history. In his book, On the Psychology of Military Incompetence, psychologist and former military man Norman F. Dixon looks at some of the biggest military blunders throughout history and compiles a list of 14 “frequently recurring factors” all of those fiascos share in common. Number four on this ignominious list is, “A tendency to underestimate the enemy and overestimate the capabilities of one’s own side.” If some of the most powerful men in history have repeatedly fallen prey to this mistake, how can the average – excuse me, above-average – poker player hope to be immune?

The consequences of misjudging your enemy at the poker table are not nearly as dire as they are on the battlefield, but try telling that to the player who has just suffered a major loss. The poker player who underestimates his opponent is giving that opponent opportunities he would never give away otherwise, simply because he doesn’t recognize the magnitude of the threat. A common example is the hopeless bluff. How many times have you seen an intelligent, capable poker player bluff off a huge chunk of his stack, attempting to steamroll a supposedly-weaker opponent out of the pot – when it should have been clear all along that the “victim” was likely to call? Or consider the flip side: letting an opponent steal a large pot away from you, because you were convinced he was too passive and/or too timid to make a move like that. Either way, the player stacking his newfound chips got a huge assist from the opponent who underestimated him.

But the reasons why we underestimate our opponents go well beyond a quick ego-boost. Stereotypes are another big cause, particularly in live poker games where we can see and hear our opponents. Sexism is still alive and well in the poker world; any woman who sits down to play poker against a table full of men is often seen as too easily intimidated and generally unschooled about the game, all before she has even played a single hand. Older players are regularly looked upon as nits, incapable of creative plays, while very young players often get labeled as overly aggressive and impulsive. Racism can also be a factor for some. How our opponents dress, the way they speak, their personal attractiveness (or lack thereof), their height, their weight – all this and more influences our assessment of them not only as humans, but as poker players. And while some stereotypes do hold true for the most part – younger players are generally more aggressive, while older players lean more towards conservative play – there will always be exceptions.

This problem is analogous to what can happen during the play of a hand, when we mistakenly put an opponent on a specific hand too soon, clinging to that initial judgment come hell or high water, even in the face of contradicting evidence. Only when he flips over a completely different hand at the river do we realize the error. As we know, the correct way is to begin by putting your opponent on a range of hands, and then narrow down his potential range of hands based on his play in subsequent rounds. That’s the most effective approach if we want to avoid nasty surprises at the showdown.

The same principle can be applied to reading the opponents themselves. Instead of jumping to the conclusion that somebody is a maniac, a nit, or just plain stupid, put him on a range of possibilities and then narrow down that range as you watch him play more hands. If a player at your table calls off a bunch of chips with a junk hand, chances are that he really is a mindless calling station. But maybe, just maybe he’s a tricky player who showed his bad cards on purpose to mislead the table. Or maybe he was temporarily on tilt, or he just lost his focus for a minute and made a mistake. The possibilities are numerous and you need more evidence before you can accurately judge. Since poker is a game where success or failure lies in our ability to adjust to our opponents, correctly assessing the skill level of those opponents – even if it means contemplating the uncomfortable notion that they might be just as good or even better than us. 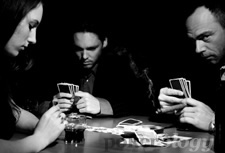 Poker has often been likened to a kind of warfare. Our chips are "ammo" that we "fire out" at the enemy.