Trust Your Reads and Poker Instincts

“Trust your instincts, class.” Those were a teacher’s words back when I was a teenager and prepping for one of the myriad standardized tests administered to see how we were progressing with our lessons in comparison to kids from other schools in other cities, all across New York State. What out teacher meant was this: When confronted by a multiple choice question, or one that could be answered “true” or “false,” and you aren’t sure which answer is correct, go with your initial instinct.

Little did I know that this would turn out to be terrific poker advice, though poker is infinitely more complex than true-or-false, always-sometimes-never, or some collection of five choices labeled “a” through “e” and plugged into a multiple-choice grouping.

While all good poker players have the skill to make tough decisions correctly more often than not, great players also have courage that supports their convictions. Once players learn to make accurate reads and decipher the range of hands their opponents are likely to play under whatever the current circumstances happen to be – great poker players have the guts to stick with their reads and act on them. And even when they’re occasionally wrong – and everyone is wrong some portion of the time – they have the fortitude not to let a bad read or a protracted slump turn them around and take them completely away from trusting their instincts.

I’ve often talked about taking advantage of your opponent until they give you a good reason to change your strategy, and why it’s important to hold tight to this approach: Never change a winning game; always change a losing one.

I’ve occasionally been told that these two phrases seem to be at variance with one another. What do you think? Should you stay the course, or do so only when it’s working, but try another approach if you’re not getting the results you’re hoping for?

When analyzing our opponents’ play, trusting our analysis and committing money to it is really the only choice we have. To second guess ourselves without good reason renders us directionless and adrift without a rudder. Our actions – whether it involves betting into an opponent, checkraising aggressive players, or bluffing overly tight opponents, are all the kinds of things you shouldn’t change when you’re winning, but if your results are not what you’re hoping for, you need to pull apart your game and rebuild your strategic and tactical approach.

Analysis – as opposed to what we actually do – is poker’s inner game. After all, you can put your opponent on any range of hands and then take whatever action you think is best under the circumstances. You can check or bet, fold, call, raise, or reraise, and whatever action you select is probably predicated on whatever you believe will win the most money (or lose the least) – and the tactic you select is quite independent of the analysis you made. But analysis is the foundation upon which this house is built; and unless your analysis is right, you don’t have much of a basis for selecting the best tactic from your bag of tricks.

Sometimes you’ll be wrong because your opponent stepped out of character for just one hand! During the 2004 World Series of Poker, both Josh Arieh and Greg Raymer, who were playing very aggressively at the final table, folded when “Action” Dan Harrington reraised even though they had a significant amount invested in that pot. Harrington’s tongue-in-cheek nickname suggests a very tight player, and at the final table he entered very few pots. When he played a pot, he came in raising, and all the hands he showed down until that point were high-quality holdings.

Arieh and Raymer each folded rather quickly when Harrington made his completely out-of-character play at the pot with two worthless cards in his hand. Harrington created such a tight image at the table that it earned him a license to steal, as long as his read told him that neither of his two opponents really had much of a hand.

Arieh and Raymer probably said to themselves, “Oh, no; he’s got pocket queens, kings, or aces,” before folding their hands, and until they saw it all on TV a few months later, they never realized how easily “Action” Dan swiped a big pot right out from under their noses.

They read it incorrectly. And that’s not because Arieh and Raymer do a bad job at sniffing out another’s cards; they whiffed here because Harrington set them up, and they read him based on his pattern of play up until that point. They couldn’t know he was bluffing, and even if they suspected that he might bluff at some point during the final table, they had no reason to think it would be this particular hand.

Harrington’s playing style earned him at least one ticket to steal a big pot. Had a big raise come from either Raymer or Arieh, the player stirring the pot would probably have been called by the other. Raymer and Arieh each realized the other was very aggressive, and each would have made a stand if they had a real hand. But to call Harrington in that situation they needed a great hand, not merely a good one, and if “Action” Dan was able to read both of them for good-but-not-great hands – the kind most expert players will lay down to a tight, conservative player who comes in raising – he earned that pot.

The fact that Raymer and Arieh misread Harrington on that particular hand does not mean they needed to question their card-reading based on what they’d observed thus far; in fact, that would have been the worst thing they could have done. They each took the hit and continued on from there. Their ability to make good reads most of the time had gotten them to the final table and there was no need for radical surgery just because another expert player had set up a terrific bluffing situation and followed through with it. On that hand, Harrington succeeded. He never showed his hole cards, so as far as his opponents knew – at least until they saw the results on TV later that summer – he did have a big hand, and they made good lay-downs.

(If you’ve not yet seen it, watch the video of this famous hand and my analysis of Harrington’s squeeze play in the masterclass section.)

Don’t distrust your reads when you’re playing poker as long as they’ve been correct more often than not. What might seem like a bad read may simply be a reaction to your opponent stepping out of character for a hand or two. Trust your reads as long as they’re working for you the majority of the time. If they’re not working, it’s usually a case of interpreting betting patterns incorrectly, so watch your opponents, watch the hands they turn over at the showdown, and adjust accordingly. If you seem to go astray only every now and then, just keep on course. It’s usually the right one. 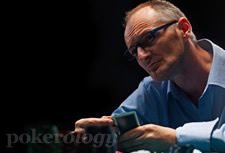 When analyzing our opponents’ play, trusting our analysis and committing money to it is really the only choice we have.