In a poker world where terms like “best ever,” “greatest of all time,” and other types of accolades seem to come quite freely, it is hard to tell the true greats from the flash in the pans. T.J. Cloutier meets all those accolades and more. Cloutier has been making a living off of poker for nearly fifty years. If Doyle Brunson is considered the “Godfather of Poker,” then Cloutier should at least be considered his right hand man. Cloutier came up the same way Brunson did, back when “tough” poker games had another meaning. In those tough Texas cash games, winning a pot meant raking in your chips, and also watching your back to make sure no one else was coming after them with guns blazing. Luckily Cloutier made it out of those days and has been able to become one of the greatest tournament players and contributors the game of poker has ever seen.

Thomas James Cloutier was born October 13, 1939. Through his childhood and early adult years he made his home in Albany, California. Cloutier was a highly regarded athlete, earning himself a scholarship to the University of California Berkley to play football. While there he excelled, even getting a chance to play in the historic Rose Bowl in 1959. After graduating Cloutier had high hopes of signing on with the National Football League. Unfortunately for Cloutier his parents asked him to come back to Albany because they had run into financial trouble and needed their son’s help to try to make ends meet. But before Cloutier could even find a job, Uncle Sam called him, drafting him into the army.

If Cloutier had signed on with an NFL team straight out of college then someone else would have been writing about him going into that sports hall of fame. Instead he gets drafted to the army, and is introduced to poker. In the army he says he played the game to pass time because he still had high hopes of making it to the NFL, but he kept it in the back of his mind of how well he had done at the game. After the army he did end up playing professional football, but it was for the Canadian Football League, playing for teams in Montreal and Toronto. After a few years of football, injuries began to set in and he realized he would never play in the NFL.

An opportunity arose back home allowing him to buy a grocery store, so back to Albany he went. Shortly after opening the store it ran into money problems and it closed its doors. On a hunch, Cloutier traveled to Texas to get a job at an oil field, but it was not oil he would be cashing in on. Cloutier found a job on an oil rig, but it was the poker games he played with his co-workers on off days that really kept his attention. He found that he was making more money in one night at poker than he was at his “real job.” Cloutier quit his job at the oil rig and has never looked back.

In his tournament career TJ Cloutier has won over 60 major poker tournaments, an almost unheard of number. Cloutier has won six World Series of Poker championships, and has narrowly missed winning about a dozen more. Cloutier holds the distinction of being the only player in history to win a WSOP bracelet in all three variants of Omaha. He won the Omaha Hi event in 1987, Limit Omaha 8 or Better in 1994, and Pot Limit Omaha Hi in 1998. His remaining three bracelets came in Pot Limit Hold’em in 1994, Razz in 2004 and No Limit Hold’em in 2005, netting him $657,100. Cloutier has narrowly missed winning the WSOP Main Event more than anyone in history, finishing in the top-5 four times, and twice coming 2nd. With nearly ten million dollars in poker tournament winnings, the poker community is lucky that he has published six strategy books.

All of these books, co-authored with Tom McEvoy, are considered must reads for any serious poker player. Perhaps his most popular book is “How To Win the Championship: Hold’em Strategies for the Final Table,” published in 2006. Unfairly, this book has been criticized because Cloutier has not won the “Main Event Championship.” Perhaps those people should take a look at his record to see that he has won over 60 major poker tournaments, all of which could be considered “Championships.” This book breaks down a tournament in sections, focusing on the last few tables, particularly the final table. Unlike a lot of hard to read poker books out there, this book talks about getting a feel for each specific player and situation as opposed to focusing so much on math. Cloutier has an easy to read style and it is almost like he is sitting at your kitchen table talking poker with you.

Cloutier’s other must get work is “Championship Omaha,” published in 2005. Who else would you want to get strategy from than the only man to win those three WSOP bracelets in three different Omaha events? With Omaha being the fastest growing poker variant, this book is one to read for those wanting to play tournament Omaha at a high level. This book touches on everything from starting hands to advanced tournament strategies.

As poker players, we are lucky that so many great players have openly shared their secrets and strategies on what made them elite. It’s one of the few games at which the general public can get better just by reading a book. It’s because of TJ Cloutier’s willingness to make the world of poker better by sharing his secrets that we are happy to introduce him into the Pokerology Hall of Fame. 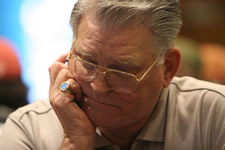 Cloutier traveled to Texas to get a job at an oil field, but it was not oil he would be cashing in on.