It is a peculiar trait of poker that in order to be a consistent winner, you cannot care too much about the money you’re trying to win. To play your best, you must remain in a cool, detached frame of mind. Under the best of circumstances, this Zen state is not an easy thing to achieve during a poker game. But when you’re playing on tilt, it is utterly impossible. All bets are off, both literally and figuratively. At best, tilt is a severe leak in your game. At worst, it’s poker suicide – a financial self-immolation performed by a player who’s so far-gone he just doesn’t care anymore.

By far, the most effective way to combat tilt is to prevent it from ever happening in the first place. Because once you’re on tilt, forget it. Whatever mental control you once had is rapidly vanishing along with your chip stack. If you can summon the presence of mind to just quit the game – be it for five minutes or five weeks – long enough to get your mind back on track, that’s about the best you can realistically hope for. But if you can learn to recognize the warning signs that a tilt attack is on its way then you can avoid the catastrophe completely. The first step is to identify the triggers that are most likely to put you on tilt. So the question becomes: What are your hot buttons, poker-wise?

Knowledge is power. Sir Francis Bacon first made this observation in 1597; the saying is still with us today because it’s true. And no knowledge is more powerful than self-knowledge. To play poker with any long-term success, you must know what puts you on tilt. Is it bad beats? Obnoxious players? Slow players? Stupid opponents who keep getting incredibly lucky? Or maybe you just don’t like a particular dealer. All these and many more factors at the poker table can be upsetting enough to put a player on tilt. Before you even sit down to play, you need to know: what could get under your skin enough to potentially make you forget everything you’ve learned about the game of poker and give away your chips?

Every poker player is unique. Sure, losing to a moron who spikes a two-outer on the river is maddening, but stuff like that happens to all poker players eventually. It’s part of the game. Some players will respond to a horrible suck-out by going on a tilt-rampage, while others can remain incredibly composed, letting it roll off their backs with a detached sang-froid that most of us can only envy. But you can bet the rent those poker players have some other emotional triggers. Everybody has them. It’s just a matter of figuring out what those hot buttons are. A player who’s cool and composed over bad beats might go positively apes**t when another player starts to trash talk.

For many of us, something as mundane and common as being card-dead for a long period of time is reason enough for a trip over to Tiltville. It’s all about insight. People close to you, especially if they are poker players themselves, may be able to give you some hints. But ultimately, the realization must come from within. To gain these insights, you must carefully observe yourself, observe your own play – much the same way you would observe an opponent to probe for weaknesses. What you’re really looking for is patterns of behavior. If a loud obnoxious opponent causes you to go on tilt once, that might be an isolated incident. If it happens twice, well, that’s a red flag. If it happens three or more times, a definite pattern has emerged. And the next time you face off against this type of opponent, you’ll know from the get-go that a living, breathing tilt-trigger is sitting across the table from you.

Identifying your tilt-triggers is only half the battle. You should also be aware of the factors that can make you more prone to going on tilt – more vulnerable to your triggers. Alcohol and drugs are at the top of the list, even when used in moderation. The more of them you have in your system, the more difficult it becomes for you to keep a cool head and defend against tilt when things start to go awry. Even seemingly-innocuous drugs like prescription and over-the-counter medications can have a detrimental effect on your mental and emotional balance.

Lack of adequate sleep is another big and all-too-common problem. Your mind simply cannot function at full capacity if your body is sleep-deprived. In fact, the list of things that can compromise your mental and emotional state before you even come to the table is practically endless – relationship problems, financial problems, health problems, a workload that’s too heavy, a sex life that’s too lacking, a pet that just died – any and all of these things can interfere with your ability to stay away from tilt.

Think of tilt as a mind-germ – a carnivorous bacteria, if you will. When tilt infects your brain, it steadily eats away at your poker skill until there’s almost nothing left. Sitting down to play poker when your mind is already compromised by alcohol, drugs, sleep-deprivation, etc, is like walking into an influenza ward when you already have a weakened immune system. Maybe you’ll be okay and walk out of there just as healthy as you came in. But the odds of infection are uncomfortably high.

Once you’ve identified your triggers and resolved not to play poker when you’re in a compromised state, there’s one more thing you can do to ward off tilt before it does any serious damage to your bankroll. Learn to recognize the early warning signs that tilt is already starting to affect you. As with any physical infection, there are symptoms. For one player, it might be making two or three loose calls in a row. For another player, it might be an ill-advised bluff aimed at an offensive opponent. And for another player, it might be something as subtle as becoming impatient – itching for the game to move along faster so he can make back his money ASAP.

Poker is rife with elements that we cannot control. Namely, the luck of the cards and the behavior of our opponents. With so much of the game beyond our jurisdiction, we need to work even harder to master the one element we can control: ourselves. Nothing and nobody can ever make you go on tilt and give away your money. Tilt is something that you allow to happen.

One Response to “Identifying Tilt Triggers” 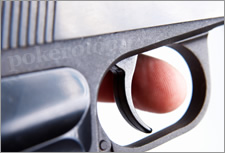 A player who's cool and composed over bad beats might go positively apes**t when another player starts to trash talk.