Poker and the Sunk Cost Effect

Humans behave irrationally when making economic decisions. This notion is central to the study of behavioral finance. And nowhere is that irrationality more evident than when it comes to the sunk cost effect. This effect describes the human tendency to continue with an endeavor once we’ve invested money, time, or effort into it. We do this regardless of whether or not the endeavor is currently to our benefit. Because we don’t want that money, time, and effort we’ve put in to go to waste, the sunk cost effect compels us to stubbornly follow through on things that are not only no longer helping us, but have actually begun to hurt us.

Let’s start with a simple non-poker example. You walk into an ice-cream parlor to get an elaborate (and expensive) hot fudge sundae that you’ve been craving ever since you saw it in a TV commercial. Halfway through eating the sundae, you start to feel sick. Do you stop eating and throw the rest away? It’s too late to get your money back and you can’t exactly take it home in a doggie bag. Or do you keep eating, feeling obligated to finish the massive sundae because you don’t want the money you spent to go to waste? Wolfing down the rest of the sundae won’t bring back one penny of your money, and indeed may end up costing you more in the form of lost time, lost pleasure, and antacids.

Or say you buy stock in Acme Answering Machines and for the first year or two the value of the company shoots up as people all over the world are buying Acme’s awesome answering machines. Then just as quickly, the company’s stock plummets as answering machines lose massive chunks of market share to voice mail and call-forwarding. Do you sell your stock at a loss, accepting the harsh reality that this company is no longer a good investment? Or do you stubbornly hang on, determined not to sell any shares until you can sell at a profit, or at least what you originally paid, somehow convincing yourself that answering machines are on the brink of a major comeback.

Of course these are both hypotheitcals, but in situations like this every day, all over the world, it’s amazing how many people will go for Option B, tenaciously sticking with something long after it’s clearly not working out for them. The sunk cost effect is to blame. So great is our aversion to losing money that we’ll do almost anything – eat food that makes us sick, hang onto an investment that’s an obvious dud, keep pouring more cash into a project that should be abandoned – rather than admit the money we spent was wasted.

But no matter what decision you make at this point, the money you spent before is gone. It’s sunk. Nothing you can do now will ever bring that money back, so the only decision that makes sense is one that’s based on what is best for you right now and for your future.

There are many ways the sunk cost effect can influence us at the poker table, but the first and most obvious has to do with the money we put into the pot. On any given betting round, you should always consider the size of the pot. And you should consider what it will cost you to stay in the hand on this and future betting rounds. What you shouldn’t consider is how much of the current pot came out of your stack. Whatever money you put into the pot during previous rounds is a sunk cost.

For example, you’re playing $10/$20 limit hold’em and you raise from UTG with pocket jacks. Your only caller is a loose-passive player in the big blind. You put him on a big ace. The flop falls 2-5-8 rainbow and he check-calls your bet. The turn brings an ace and your opponent bets out. In deciding what to do, you need to think about the $85 currently in the pot and the $20 it’s going to cost you to call. You need to think about the likelihood of another bet from your opponent on the river, how confident you are in your read that he has an ace, and of course you need to think about your outs – both of them. But the one factor you shouldn’t consider in this scenario is how you put $40 into that $85 pot. As soon as those chips hit the middle of the table, they ceased to be yours. You might be able to win that money, but you cannot lose it.

The harmful ramifications of sunk cost effect go beyond the simple economics of the pot. Money isn’t the only thing we invest in poker. We also invest a lot of time and effort, and naturally we’d like to see some kind of a positive return on these investments. The time and work you put into a poker session is a prime example. While you’re sitting at the table, you’re busting your tuchus trying to read opponents, interpret betting patterns, calculate odds, figure outs, and evaluate all the many other variables going on around you – all in a noble effort to make the correct decision when it’s your turn to act.

But as we all know from bitter experience, sometimes you can play your heart out, make all the right decisions, and still lose. And all the blood, sweat, and tears – not to mention lost money – that has gone into the poker session is a cluster of sunk cost. The only real return you might have gained comes from whatever you’ve learned during the session. If you’ve acquired any new insight about the game or about an opponent, that’s your compensation. But don’t expect more. If you stay and keep playing when you would otherwise quit – because you’re tired, tilting, or game conditions have deteriorated – purely because you expect to get something positive in return for everything you’ve poured into this particular session, then you’ve fallen victim to the sunk cost effect.

The decision to leave the game or keep playing should be based solely on what’s in your best interest right now. Are you still playing well? Are the game conditions still favorable? If the honest answer to both those questions is yes, keep playing. If the answer to either question is no, you should quit. This is simple and self-evident, and yet even the most intelligent poker player can get lost in the sunk cost effect. It’s a potent effect because we have such a powerful emotional attachment to believing that our money, time, and effort have been well-spent.

Particularly in the case of money, whatever we paid becomes a threshold – the price of a stock, the amount of a buy-in. We don’t want to move on until we’ve crossed over the threshold, but if you’re not careful the sunk cost effect can turn that threshold into a barrier, holding you back.

One Response to “Poker and the Sunk Cost Effect” 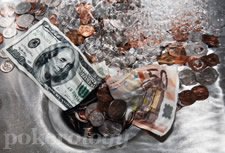 All the blood, sweat, and tears - not to mention lost money - that has gone into the poker session is a cluster of sunk cost.