The Antidote for Tilt

I bet the title of this article caught your attention, especially if you fall prey to the universally eschewed poker downfall of going on tilt. There are many forms of tilt and one I’ve written about before I like to call SST or Semi Stealth Tilt. That occurs when you begin to slowly drift into tilt without even realizing it but it does effect your game as your decision making becomes impaired. Whatever the form of tilt, it really has more to do with your emotional stability and mind set. Do you allow certain things to get under your skin or do you shed them like water from a duck’s back? There is a lot to be said for acting like a duck! When you feel like you’re drifting into tilt mode, say “Quack, Quack” and regain your resolve to play emotion free poker.

I do believe the antidote for never even drifting towards tilt is to attempt to remain devoid of emotion while performing battle on the green felt. Is this easier said than done? Maybe so, but there is a school of Greek philosophy called Stoicism which was founded around 300 B.C. by Zeno of Citium and developed by his followers that may help you develop the true antidote for tilt at the poker table. The Stoics held that all things are governed by the laws of nature and that the wise man is led by his reason to accept calmly whatever happens, always controlling his emotions. You now know that Harry, down at the end of the table who just went off like a Roman candle, is not of the school of Stoicism!

Stoics sought to live consistently with nature and stressed putting aside passion, unjust thoughts, and indulgence in order to perform duty and gain true freedom. This ancient philosophy of Stoicism is the root of the modern day word stoical, which means to be sternly unconcerned and unemotional about joy, grief, pain, or pleasure while remaining calm and unbothered. While this sounds like it would make Jack a dull boy, it does sound like positive behavior for a poker game plan. I’m not attempting to convert anyone to Stoicism but only to use its doctrines to aid your performance while playing poker. Of course, there are major benefits which can carry over into other aspects of your life as well.

Remaining stoic at the poker table comes with experience and being emotionally well grounded. After playing somewhere about a kazillion hands of poker you will have witnessed enough bizarre flops and one outers hitting on the river as to become immune to their impact. If you think about it, none of the occurrences that are deemed bad beats even approach the odds of hitting the lottery and people hit the lottery all the time! When these long shots occur the rookies gasp in awe while you should just yawn because you’ve seen it before. Unusual … yes, unbelievable… no.

Being stoic at the table projects the best table image as you take both your wins and losses with the same equanimity. This behavior may even rattle some opponents as they cannot imagine themselves remaining so composed when dealing with similar ups or downs. Sitting there remaining stoic exudes a strength and a mastering of emotion that lesser poker players simply do not possess.

We have all seen poker players that surely don’t even know the meaning of the word stoic much less possess the emotional control to make it their default style of play. That is actually good news – it means that the more of them there are the higher your chances of prevailing become as long as you possess that emotional grounding. I love to watch the players that continue to grouse about the perceived bad beats they have incurred all the while not paying attention to the current hand unfolding. Energies that are wasted complaining about the vagaries of poker are energies exerted against one’s self. Who’s side are these guys on anyway?

We are all familiar with the tilty player just described but there is yet another type of tilt and that is “Reverse Tilt” and that can be just as ugly to witness. Instead of lamenting about losing a hand they gloat when they are winning. You be the judge – do you find whining about losing or gloating about winning more boorish? Personally, I’d like to plant a size ten in the bum of both of these perpetrators to high quality poker form. The fact is that if these numbskulls were able to step back from these emotionally charged moments and objectively critique their behavior they would see how foolish it appears to the rest of their opponents.

The point of this article is not to advise you to suck all the enjoyment out of our beloved game and just sit there like a grumpy, silent curmudgeon. A good part of the game, especially for recreational poker players, is the camaraderie that exists around the table as we try and get the best of it with friends. What I am trying to “sell” is that you will be better off not demonstrating emotion whether winning or losing. That’s what winners do!

Remember to say “Quack, Quack” if necessary, you’ll thank me for it! 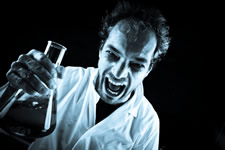 I’m not attempting to convert anyone to Stoicism but only to use its doctrines to aid your performance while playing poker.