If one looked up the term Poker Nirvana in the PJD or “Poker Junkie Dictionary” I believe it would state that poker nirvana is the invention of the Sit & Go poker tournament format. The Sit & Go format is truly the poker junkie’s dream come true. There are no scheduled starting times and on the internet they are available “twenty-four/seven” which is to say, they are always just a couple of clicks away. With the continued popularity of poker and specifically online poker, these non stop tournaments have become a favorite pastime for many a poker enthusiast. They’re quick, they’re fun and they’re loaded with action. These mini tournaments come in all sizes, shapes and flavors but this article will focus exclusively on the no-limit hold’em variety and may help you enhance your earnings in cyber space. Sit & Go’s can be a virtual gold mine for experienced, disciplined poker players and I hope to help you acquire your piece of the pie.

First, there has never been such an abundance of players with so little experience willing to risk their hard earned cash in poker tournaments. There are so many players with built up enthusiasm that starting these games never seems to be a problem, particularly on sites like Poker Stars. So we have plenty of overanxious, weak and inexperienced opponents… hmm, sounds like a target rich environment to me! I know there are also plenty of savvy poker players out there but especially in the lower stake venues, one can do quite well.

Second – and this is certainly an extension of the weak, inexperienced player’s syndrome, there seems to be an all-in mania that must be fueled by the televised no-limit tournaments which absolutely enthrall the newbies who want to emulate the top pros they see on TV. To push all of their chips into the center seems to be the essence of poker to this easily swayed group. What tends to happen in these testosterone fueled all-in fests is that before you know it several players have been eliminated and several others have doubled up. That’s OK – many of the players who have doubled up are absolutely heady with glee and are destined to give their newfound wealth back. Your mission is to make sure they give it to you!

Third, with the all-in mania infecting so many novice poker players, you should be taking advantage of this frailty in their game. This can best be done through patience, good hand selection and proper use of position. Once your patience has paid off and you receive a strong hand, hopefully in good position, just make a reasonable raise, such as three times the big blind, which may encourage a re-raise. You can then come back over the top and trap a weak player for all of his chips. If you bet too big or go all-in initially, you’ll more often than not just chase your customers away. If you check with the thought of check raising, it becomes too easy for many players to get away from their marginal holdings. However, if you just make a sensible bet and they try to bully you and you then come back over the top, it becomes very difficult for weaker opponents to get away from their losing hands. They push and push and push – if it works, great and if not they are only a couple of clicks away from a brand new stack and a group of fresh opponents.

Lastly, I would like to share a powerful poker strategy for these Sit & Go’s when approaching the money which I see many inexperienced players routinely ignore. It is simply to target the correct opponent when approaching the bubble. We all know not to try and tackle the chip leader unless we really have the nuts. However, if we are one of the chip leaders and the field is down to four ( the top three places are normally paid on a 50/30/20 percent of the prize pool basis ), then who should we be attacking? Let’s take a look at a scenario to determine who your crosshairs should be placed upon.

Let’s imagine you’re playing in a one table Sit & Go which started with a total of $13,500 ( nine players each starting with $1500 ) in chips on the table and you hold $4,000. The chip leader has $7,500 and the remaining two players have $1,500 and $500 respectively. Many players automatically attack the shortest stack to get down to three players and qualify for the money. However, the player in fourth position with only $500 and facing escalating blinds, knows he’s in trouble and is desperately looking to double up and will not need much of a hand to go all-in. He simply cannot afford to wait too long. The player who is in third place with $1,500 realizes that as soon as the low man with the $500 gets knocked out, he will be in the money. This knowledge should be used against him as he will not want to commit any of his chips without a near lock. Attack, attack and attack the player with the $1,500 stack as he will virtually lay down 99% of his hands just waiting to get into the money. By the time you find yourself down to four remaining players, the blind structure is normally high enough to make these blatant steals quiet profitable.

This may sound pretty basic and it is except as you play these tourneys, you’ll notice players who go into a shell as the bubble is approached hoping Mr. Chip Leader will take out both of the short stacks. The problem with being passive and letting the chip leader do all the eliminating is that you’ll find yourself at an enormous disadvantage chip wise when you get down to heads up play. Chip stack management is crucial and you should be amassing those easy chips so you’ll have ammunition to fight it out for first place. Remain alert for this prevalent behavior and then give this tactic a try and see if it improves your win rate and therefore, your bottom line.

Remember, good things usually don’t last forever so start taking advantage of all the loose, inexperienced play which currently exists in many of these Sit & Go’s. Don’t be seduced into the feeding frenzy mentality of the all-in mania. Be patient and lay back, assess your competition and attack their inexperience. Force them to make a decision for all of their chips but on your terms, not theirs. There is no question that these popular Sit & Go’s can be a valuable learning experience and profitable as well. Best of all – if things don’t work out quite as planned, remember that you’re only a few clicks away from a brand new stack and a group of fresh opponents. After all – it truly is Poker Nirvana. 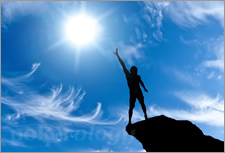 Sit & Go’s can be a virtual gold mine for experienced, disciplined poker players .