The Risks of Winning at Poker

So you’re doing great. You’re at the $2/5 no limit table and you are ruling. You sat down with $300, doubled up in the first ten minutes when your A-K improved to top two pair. You had someone call you down on your shove on the turn, and the river was a blank. Then just four hands later, when you were on the button, you got to be the fifth one in for a limp, with a suited ace. Two of your suit came up on the flop and you called for $75. On the turn it was checked to you. You semi-bluffed with a $200 bet with your four-flush, got a big stack caller, then hit your flush on the river. The card gave him trips and you nearly doubled up again as he called your over excited bluff-looking shove on the river. In fewer than 30 minutes you are sitting with over $1100, having started with $300. Not too shabby.

But novice and even intermediate poker players beware. Nice as it is to begin your poker session with a rush like this, there are risks involved. Inexperienced and moderately experienced players can be thrown by the early win in a way that threatens to steal back their gains and then reach into and dispose of the rest of their playing bankroll.

The risk is simple – though not necessarily easy to avoid. It is the risk that the newly enriched stack, large as it is, will affect your judgment by distorting your ability to see what is really important when making critical strategy decisions at the table. Let’s continue the story above and see it as a cautionary tale.

Having started with $300, due to a couple of quick and large wins, you’re now up $800, with $1100 in chips. You are the big stack at the table. You are giddy from your success. A tight player in early position with a couple of hundred dollars raises to $25. Everyone folds to you. You have

. Though you would normally fold this trash, you figure you might as well call, with all of those chips in front of you. Who knows, you might catch Q-7 on the flop and take this guy’s stack too.

Sure enough, the flop is helpful.

. You’ve flopped top pair. He checks, you slide out a couple of green chips for $50. He shoves in his stack for another $175 more. Even if you lose you realize that it won’t make a huge reduction in your wins. Before you have a chance to really think about things you hear yourself say “call”. He immediately flips over Q-J. The turn and river don’t help you, and you’re stack is now down to $900. You say to yourself that you’re still up $600.

You tell yourself that you have to tighten up – not get too loose, so you’re assured of not depleting your big stack. So you tighten up some – folding a few hands in a row. But your big stack and your earlier rush is still getting to you. You’re impatient. You get

, raise to $25 in early position and get re-popped from the cutoff to $75 by the big blind – a very tough player with a big stack. You call, not to be intimidated and hoping for trips. You figure you’ve still got over $500 to play with and still be even for the session. The flop is

. You are afraid of the Queen but don’t want to show weakness or give a free card. You bet $75 and get raised to $200. You think that this guy is trying to run you off a hand. You will still be up $325 even if you lose. So you call. The turn is the

. You figure you better check, in case he has a Queen. He bets $400. You figure you could still win with another spade or a Jack. You’d still be close to even if you lost. So you call again. You have him outstacked, you realize, with about $100 more than his stack – about $425 to his $325 or so. The river is the

. You’ve hit your flush. You shove, and get called instantly. He flips over his two black Kings, showing his winning flush, and you’re left with $100.

You can’t believe you just went through not only your huge winnings but nearly your entire stack. You’re disgusted, grab your few chips, and rage off.

Of course the specifics may be different from your experience, but I’ve seen this very story unfold in front of my eyes on more than one occasion. Let’s look back and see what went wrong.

The primary error was that the actor in the story repeatedly made decisions based on his stack size – judging whether to call, fold or raise not on his thoughts about the hand itself or on his opponent’s motivation for betting, but rather, based on how much he thought he would be up or down for the session. At first he decided to call with a hand he should have folded – just because he had a lot of chips. Mistake. Then we saw him repeatedly think about his stack size and winnings when deciding whether the risk was worth the cost of a call or a raise. This too was a mistake.

While it’s important to consider relative stack size when figuring implied odds – or when pondering the psychological effect of a bet on an opponent – how much you may or may not be up for the session is practically irrelevant. Yet repeatedly, this guy was looking at proper strategy through the distorting prism of his newly increased stack size. This lens magnified the irrelevant, diminished the important, and distracted from the significant, causing him to reach the wrong conclusions.

The way to fight the potentially toxic affect of a large early win is simple – though it may not be easy for you. If you are not yet experienced, thick-skinned, or otherwise mentally tough enough to resist the distractions of a large early rush, I suggest that you leave the table for at least a short while – to consider what has happened and to dedicate yourself to playing solid poker. Leaving the table will give your emotions and good judgment the time necessary for them to reset back to their normally stable condition. So “normalized” you can come back and continue to take advantage of players who, under normal circumstances, are relatively easy pickings. 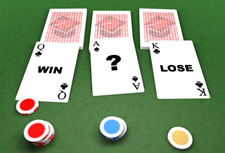 At first he decided to call with a hand he should have folded – just because he had a lot of chips.