Right Between the Eyes!

Right between the eyes is a description which normally refers to a top notch shot which stops a foe in his tracks. Other phrases used to depict this type of excellent marksmanship include; bull’s-eye, on target, score ten, right down the middle and drop him in his tracks. All these phrases conjure up the illusion of a vanquished foe. We’ve all been unfortunate enough to have played the vanquished foe on the green felt either through the superior play of our opponents or the scorn of the Poker Gods. While I can’t help you with the scorn of the Poker Gods, today I’ll suggest several ways some players almost place a big red target on their chest and dare the rest of the table to take a shot at them.

Students of poker, I believe, would be in consensus that consistently winning is a tough road which takes a high degree of commitment not only in learning the game of poker, but in the ability to exercise discipline and not allow emotion to dictate actions. While I think we should all be able to agree with the last sentence, I’ve noticed serious students of the game do some incredibly dumb things to encourage opponents to take shots at them in an attempt to hit them right between the eyes! Let me share a few of these so you may determine whether or not they resonate in your game.

The first of these mistakes which embolden opponents is to signal the table that you will only be playing until the blinds come around to you. Players do this by actually announcing this to the table (how dumb is that?) or by racking up prematurely which announces their plans. More astute players realize that racked up players tend to tighten up because they don’t want to fritter away chips that they have already imagined as coin of the realm in their pockets. This knowledge emboldens them to take shots at the departing player who will be more likely to fold. There is no good reason to provide advance knowledge as to your plans.

Another common mistake encouraging foes to take advantage of you is playing with a short stack. Now I know some will disagree with me and believe that entering a game with a short stack is a good poker strategy which can enable you to make a quick hit with limited down side risk. To these folks I say, “You’re certainly entitled to your opinion, but guess the news – you’re wrong”! I believe short stacks look like easy prey to deep stacks and can be bullied unmercifully and are usually targeted by stronger, more savvy poker players in possession of deep stacks.

Another way some players invite target practice by opponents is by a style of play that is totally predictable. This is usually exemplified by a weak/tight mode of play. These rocks sit there waiting for the right position and very strong hands and then still like to see a cheap flop to make sure they are way ahead of the pack. If this behavior applies to you, realize you really need to mix up your game and step outside your current comfort zone. If you’re sitting there playing scared poker you become a target for the more experienced players who can smell fear several tables away.

I’ve written about this one many times – if you find yourself losing, remain stoic and do not become emotionally demonstrative by whining and moaning about your misfortune. In fact, I like to make a re-buy if I’ve been losing so newcomers to the game will not conclude that I’m struggling by viewing my depleted stack. Whining players are on the edge, or worse, of tilt. The whiners are the regular targets of more emotionally grounded players. If you do become so upset as to be unable to control your emotions, then do yourself and your bankroll a favor and take the rest of the day off. Allow your bankroll to live to fight another day.

This is another aspect of the game about which I’ve frequently written. You absolutely should always be studying your opponents for clues as to their poker prowess. One thing I always look for is who else at the table is regularly scanning the rest of the table, including me. I put “The Scanners” in a different category than the players, who are not paying attention to anything but the television, the cocktail waitresses and their crossword puzzles. That should tell you that if you do not regularly pay close attention, those who do will put a bull’s-eye on your forehead.

Here is the good news. If any of these scenarios are part of your poker game, they are easily eradicated. As we know, the vagaries of poker make it challenging enough to win without inviting opponents to attempt to hit us “Right Between the Eyes”. Look at the aforementioned foibles in two ways – first, if they are part of your game, eliminate them immediately and second, look for opponents that place a target right between their eyes and take aim at their chips! Happy hunting! 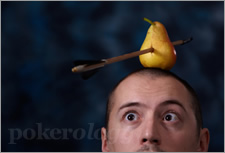 You should always be studying your opponents for clues as to their poker prowess.