When I first started playing poker, all of my games were of the private variety which I would guess was the same for about ninety nine percent of new players who started out ‘back in the day’. I’m sure with the advent of online poker that percentage has changed dramatically. Today, we are going to ignore online poker and examine the differences between playing poker in private games at someone’s home or in clubs versus playing poker in public cardrooms or casinos. There are advantages as well as disadvantages to each venue.

Let’s first take a look at some of the upsides to playing in home or private games.

While poker home games need to constantly recruit new players in order to sustain themselves the core players usually know one another well. There is a high degree of camaraderie and the social aspect is a key part of any home game. While serious poker may well be played, there is also a very definite social atmosphere including telling jokes and the inevitable teasing and jousting with one another. Laughs, a good time and poker … an ideal combination for the recreational player.

Many home games ask for some participation in funding the cost of snacks and drinks but most do not have a rake or expect the dealer to be toked. After all, in a game where the deal rotates around the table, everyone has his chance in the ‘box’. Some regular home games rotate their venue and each player is required to host. Then the cost of the night falls on the host but in the long run it all evens out.

Poker home games, some of which go on for decades, have the same core players at every game. This fact can be a huge advantage to the serious, observant student of the game. Knowing your competition so well can provide you with information to make solid decisions. Over the years I have played in many poker home games and have always been amazed at the number of regular participants that don’t seem to file this kind of information away for future use. Remember, I referenced serious, observant students of the game, not all participants.

Many players in home games are not focused, hard core players striving to make a profit but are there for the aforementioned social aspects and enjoyment of playing cards with their friends. If they win, great, but if the lose, they consider it a small price to pay for the enjoyment of the evening. This, of course, depends upon the stakes which are being played.

Now let’s look at some of the downsides to these games.

Even though many poker home games are played as dealer’s choice, that means you are only assured of playing your game of choice once every round. The group’s choice of playing stakes may not be yours either but as they say … it may be the only game in town.

You may reside in a location that considers playing poker for money to be illegal. Most home players do not worry much about this aspect since they are playing in their own or a friend’s home. I read with amazement some time ago where there was a police raid on a senior citizens home where the residents had instituted a $.05 and $.10 poker game in their clubhouse. I’m predisposed to support poker but even if you are anti poker, wouldn’t you think the police would have more important tasks than breaking up a nickel and dime poker game being played by a group of octogenarians?

The safety of poker home games is another issue that most players do not concern themselves with. This also can be a factor of how high the stakes are and how many strangers are allowed in. A word of advice … if you’re uncomfortable in a new private game for whatever reason … leave!

Unbelievable as it may sound, cheating is more prevalent in private poker games than in public cardrooms. I have a plaque on my game room wall which reads Trust everyone but always cut the cards. I believe that is sound advice coupled with always remaining observant and as cited above, if you’re uncomfortable in a new private game for whatever reason… leave!

These upsides and downsides to playing in home and private poker games are not meant to be all inclusive but to highlight the most important ones.

Now let’s take a brief look at the advantages of playing in a legal public venue.

While poker home game players pine all week waiting for their Friday night poker fix, public cardroom games are usually available twenty four hours a day, seven days a week. The game is always there just waiting for you to arrive!

Since the game is always there and you’re not necessarily playing with friends and family, you can quit when you want. You can play a short poker session or a long one… your choice. You can also perform what could get you ostracized in a home game… the ‘hit and run‘. Catch lightning in a bottle for an hour, rack up and leave to come back another day. Instead of hearing your friends grumble all you’ll hear is, “Seat open on table six.”

The bulk of the remaining advantages and disadvantages of public poker essentially are the mirror image of the subjects covered under home and private games. On a personal note, before I moved some ten years ago, my poker playing time was probably about ninety percent home games based upon my area of residence. That has changed in the last decade to be one hundred percent public poker. I must say, I miss the old home games with their camaraderie and mix of unique poker games. I guess you just can’t have everything! 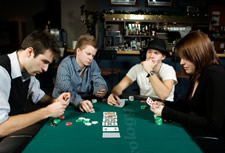 I have a plaque on my game room wall which reads; trust everyone but always cut the cards.