I’m entitling this series of articles, Poker Rx. For those of you not familiar with the symbol Rx, it currently is used to mean medicine, derived from the Latin word for “recipe” and meaning “to take”. It is now used colloquially to mean “a fix”. In this series of articles I mean it to mean a prescription for what ails your poker game.

The first step necessary in addressing the problems with your poker game is to have an accurate diagnosis. This requires egoless analysis. It’s admittedly tough for many of us to admit that we are making mistakes in poker. But unless we can first recognize that there may be a problem with our poker game, we will be unable to accurately diagnosis it. And unless we can accurately diagnosis it, we surely won’t be able to treat it.

Step 1: Recognition That There’s a Problem

This requires that you keep accurate and detailed records. Are you a winning player? Are you a losing player? That’s pretty basic stuff. But how do you know unless you record your wins and losses for each poker session, while keeping a running count for each game you play? Accordingly, you must keep accurate records. Keep them in one place, preferably a small notebook and then a computer program. I suggest that you include the following information so you can track exactly how successful you are in different situations. List the date, the place that you played, the time of day, the length of session, the game, the stakes, and of course the win or the loss. I also find it helpful to have some space to make comments, however brief, that may help you recall the session and that may have had some bearing on how you did during the session. Here are sample entries.

If all your entries were like this you might not think there was a problem. But if you have a bunch of entries that are going in the other direction, and if you believe that you seem to be suffering some reversals in your game, you might conclude that there’s a problem with your game. If so, you’re ready for step two, diagnosing it.

Step 2: Diagnosis of the Problem

It’s necessary that you notice that there may be a problem with your poker game. But that’s not sufficient for you to correct the problem. You must figure out what the problem is. This process is made easier if you have a poker partner or coach with whom to discuss what you have noticed. I’ve learned that nearly all of the highly successful professionals got to be successful by having such a sounding board or mentor. It is through this process of dissection, discussion, and analysis that players readily recognize and learn from their mistakes.

Here’s an example of that. A player notices that he has been losing a lot of money at showdown – especially late at night after he’s been playing for many hours. When he looks at the situation more closely, he recognizes that he finds himself in many more multi-way hands. He might surmise that the problem is that he is not being aggressive enough pre-flop – allowing his opponents to enter many more hands and improve to hands better than his. He might conclude that his problem is that he is not aggressive enough pre-flop.

It’s useful to have a second person engaged in this process. They might think of possibilities that you haven’t considered. They might notice that, actually, you are raising more, not less as the night goes on – emboldened by your early success with an aggressive strategy. You might recall that, in fact, you maintained your aggression but you were aggressive more frequently. You might conclude that your opponents, seeing aggression from you much more frequently than normal, might grow to disrespect your raises – calling you down more frequently. You might then conclude that the problem is not insufficient aggression but too frequent aggression. The key is to be willing to consider possibilities other than your first impression of what the problem is. This can be done alone, if you’re open minded. But it works best when at least one other person can engage you in discussion.

Sometimes the problems, and therefore the solutions to those problems, are complex. Maybe the problem is not lack of aggression in general but lack of aggression pre-flop – or not following up on your aggression pre-flop with aggression on the turn. If so, then you need to start experimenting with different approaches – perhaps being more selective pre-flop but then continuing to be aggressive more frequently, regardless of what cards hit the flop. On the other hand, perhaps you’ve noticed that players disrespect your pre-flop raise and become aggressive if you don’t bet the turn. The prescription for that problem may be to always make a continuation bet – even if you don’t hit anything on the flop.

The above notwithstanding, don’t give up too soon on your solution to the problem. It’s easy to fall back to your bad habits too quickly. It’s easy to quit too soon. Make a commitment to continue to apply your Rx for at least 20 hours or so. If you fall back to your earlier patterns too soon you won’t have any way of determining if your fix has worked or failed.

No experiment can be said to work or fail until and unless you have analyzed the results. Go back to your poker log book. See if your hourly rate has improved. Consider the extenuating circumstances that you noted. Think through the way that you played critical hands. Did you apply a different strategy? Did you change your ways? Can you draw any conclusions about the results? Are your changes working?

If the changes are working, keep at them and analyze your play after another 20 hours or so. If the changes aren’t working, consider and decide what isn’t working. You may have an inconclusive result. If so, continue for another 20 hours and reassess again then. On the other hand, after reflection you may see that the changes you made were insufficient, incorrect, or unnecessary. The key is that you think things through until you can draw some conclusion.

The key to all of this is to make sure that you don’t just keep playing poker the same way in the hope that the cards will just start coming your way. Trust your observation that there’s a problem and then go from there. It is all too easy for you to convince yourself that there isn’t a problem before you have given a full fledged effort to test new poker strategy ideas. 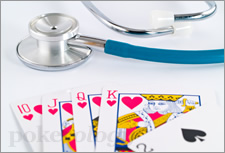 It is through this process of dissection, discussion, and analysis that players readily recognize and learn from their mistakes.