In order to practice safe poker one needs to use protection just like so many other things in life. Sorry, I couldn’t resist. OK, let’s focus – I am talking about protecting your hand from being accidentally mucked.

In last year’s WSOP the unthinkable happened. French poker pro Estelle Denis moved all-in when JC Tran raised 32,000. As she shoved her stack of 100,000 plus forward to move all-in, the dealer scooped up her cards and slid them into the muck. Horrified, Denis told the dealer and then the floor supervisor what her cards were in hopes that they could be retrieved. They did look at the top cards, which were not hers, and then declared her hand dead. She was forced to make the call and therefore lose the 32,000 which JC Tran had raised but was allowed to take her re-raise back. Denis declared that her hand was a pair of aces. Here’s it is:

I think that not protecting her hand with a card weight (a rookie mistake) is one that she will never make again. Denis was eliminated shortly after this calamity. You use protection, don’t you? If not, let Estelle Denis’ heartbreak be a lesson for you and begin immediately.

Greg Ramer made the use of fossils famous by using them as his card weight of choice. I happen to find Humberto Brenes use of his little shark protector to be particularly annoying but, aside from his theatrics, the shark’s use as a card protector is understandable. Many poker players use a coin, a little statue or some other trinket as not only a card weight for protection but also as a lucky charm or a talisman. A talisman is defined as an object that will bring good luck, keep away evil or simply a charm that possesses magical power. Wow – are we now entering the realm of voodoo to try and win at poker? I’m not, but some players might be!

Do the players that use these coins, statues and all manner of other trinkets really believe their lucky charms will, in fact, charm the poker Gods into granting them monster hands and protect them from their opponents’ monster hands? I guess some do and you almost have to feel sorry for these fools that are placing any stock in magical powers. I did say almost because if they do believe mystical powers are the path to poker success instead of probability, psychology and a deep understanding of the game then you should be thrilled to have them at your table.

I use a talisman at the poker table and use it for more than a card weight for protection. Most players use some kind of a weight even if it is only a poker chip from the game. In fact, aside from this colossal mistake by Estelle Denis, I cannot recall any other seasoned professional not protecting his or her hand. What could be another use aside from a belief in mystical powers and the straightforward end use of protecting your hand? I use it as a visual reminder to play solid, disciplined poker. When I get a little bored or frustrated by a run of unplayable cards and begin to get that urge to open up my game, I take a glance at my talisman to remind myself to maintain my discipline.

Here are four of my four hundred favorite card protectors/talismans (Yeah, a slight exaggeration but not that much):

1. The “Aces” are hand painted on a river rock and I bought it many years ago from a women in a Michigan cardroom that made them from rocks she collected.

2. The black/white/red WSOP chip was purchased at this year’s tourney.

3. The King of Hearts is a “spinner” – which has a “nipple” on the reverse side so that while sitting on your cards can be spun around.

4. The WSOP was a commerative silver coin that Binion’s Horseshoe commissioned for the 25th anniversary of the WSOP in 1996. It is the year that Jack Binion awarded the winner his weight in silver in addition to the first prize. The winner was the heaviest contestant and cost Binion an additional $27K in silver bullion. His name was Russ Hamilton – who knew at the time he would later become famous for the Ultimate Bet cheating scandal.

A Chip or a Talisman?

The common practice of placing a chip from the game on top of your cards to protect them does not have any special impact to remind you to maintain your best “A” game. Sure it protects your hand, as well it should, but why not get a dual purpose out of your card protector? I suggest you bring your own talisman to the table to not only protect your cards but to use as a powerful visual reminder that you should not allow yourself to slide down the slippery slope of undisciplined gambling on marginal poker hands.

A potential bonus of using your own unique talisman might be to lure an opponent into believing you think it has mystical powers and therefore mistakenly think you are relying on luck instead of skill. In fact, you will be using it for the exact opposite reason – to help you maintain your focus and discipline. Hey, let them think you believe in Voodoo. It just might help you take a few of their chips. Then when they’re broke and on the rail they might complain about the zombie that got lucky instead of the donkey!

We’ve covered three varied reasons for using a personalized card protector: to protect your hand from being mucked or fouled, to beseech the poker Gods to smile down upon you and to visually remind you to always play your best game while possibly misleading your opponents into believing you are part of the crowd that is into the mystical nonsense. All in all, these are some good reasons not to make the same rookie mistake that may well have prevented Estelle Denis from advancing to day six of the 2009 WSOP. Who knows, not using protection may have cost Ms. Denis $8,500,000. Wow, that’s an expensive poker lesson and you’re getting it for free! 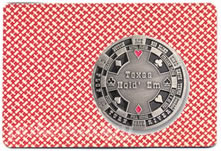 Most players use some kind of a weight even if it is only a poker chip from the game.