When it comes to poker, I’ve often written that knowledge is power and guessers are losers – and while I do adhere to those two dictums, let’s face it … sometimes you have to guess. Does that make you a loser? Gosh I hope not as I find myself being forced to guess on a regular basis. Hopefully your guesses are not what falls into the category of Wild Ass Guesses but are of the informed variety. Since poker is a game of incomplete information you are forced to make guesses often. What is my opponent holding? Is his continuation bet just that or is he semi bluffing or value betting? Can I effectively thin the field with a raise now? The list of questions and therefore decisions or guesses goes on and on. The one thing we normally find out fairly quickly is if our poker decisions/guesses produce a positive result or not.

When things are going well and you’re on a streak of wins, many poker players don’t even believe they are guessing. They just feel like they are in the zone and are invincible. We’ve all felt that wondering exhilaration but the euphoria it brings with it can be dangerous in not managed properly. On the other hand, when things are going poorly, many poker players begin to second guess themselves and their ability since their decisions/guesses all seem to be wrong. It is these two scenarios which can be very vexing to some. The quintessential question becomes… when our actions result in a bad outcome, are they wrong? Well, not necessarily.

Let’s look at a fairly common scenario. Imagine finding yourself heads up on the river holding a fairly mediocre hand. Your opponent makes a pot size bet giving you 2-to-1 on a call. You only have a mediocre hand but have observed this player and believe from his past actions that there is at least a fifty percent chance he is trying to buy the pot. Your belief is further supported by the two hearts on the flop that never were joined by a third one. You decide to call and this opponent shows down a very good hand to take the pot. There is no question that your decision/guess did not pan out and your penalty was losing a pot size bet. Here is one key fact to help keep you on track and it is to not equate bad results with bad decisions.

All dedicated students of the game know that a key element to success is paying attention and evaluating your opponents’ tendencies. If you are making a truly informed, well thought out, analytically competent, odds in your favor guess then accept the result and move on. We all know that poker is about making good decisions, not winning the most pots. There is a major dichotomy between results and decision making that is the essence of poker. However, there is also a slippery slope involved if you’re not analyzing situations, decisions and guesses well.

How many times have you made poor decisions/guesses and prevailed? If you’re capable of knowing the difference then those “lucky guesses” or as pointed out earlier… Wild Ass Guesses should not be attributed to skill. These situations of winning when just guessing can introduce confirmation bias and that can really take its toll on a player. A less informed player might begin to think… “Boy, am I hot stuff… I just took down three pots in a row based upon my incredible reads. I’m on fire and can beat this competition like a drum.”

This same player will have incredible difficulty in dealing with the reverse scenario. “How can I be losing?” this player will lament when his decisions/guesses are not spot on. This bemoaning the reality of poker and the confusion as to what can possibly be going so wrong can really get in a weaker player’s head and cause the downward spiral to accelerate. The key here is to become decision focused not results focused. When a good decision does not produce the desired result, don’t beat yourself up. What good can that do? Questioning the quality of your decisions or guesses is valuable. This can prevent you from veering off the course of good, solid poker playing while kicking yourself in the bum for a bad result can only be self destructive.

As poker players grow and become stronger, they often find themselves making more mistakes than in their weaker playing days. This should be true of all players. Do you know why? Can you guess? It is because, as you become a better player, you will become more aggressive and bet or raise more often than check and call. In essence, you will increase the opportunities to be wrong. That’s OK… you will also be increasing the opportunities to be right. The obvious key to this dynamic is to make the right decisions or guesses pay more than the wrong ones cost. Then at the end of the day… well you can do the math!

The one essential aspect in poker, as in all of life, is to learn something from the decisions which do not turn out as you had hoped. That something should be to recognize whether the decision or guess was just incorrect or if it was wrong. Add that to your play book and your growth curve as a poker player should escalate. 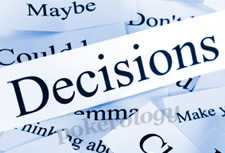 Hopefully your guesses are not what falls into the category of 'Wild Ass Guesses' but are of the informed variety.